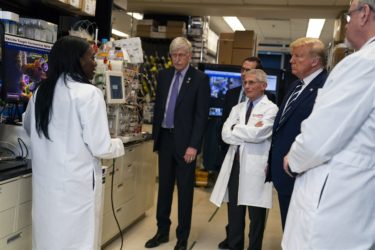 The day President Donald Trump went to the National Institutes of Health for an update on progress toward a vaccine for COVID-19, many of those who sat behind the presidential seal with him were white men well known in the worlds of science, medicine and, now, national anxiety control: vaccine and infectious disease specialists like Dr. Anthony Fauci, Dr. John Mascola, Dr. Barney Graham and the man who led the human genome project, Dr. Francis Collins, director of the NIH. Sitting next to Graham was Kizzmekia Corbett, an NIH research fellow. In 2003, Fauci said at the event, NIH scientists managed to identify SARS and get a vaccine to stage-one clinical trials in 20 months. Now a team of scientists led by Corbett, 34, was poised to move to first-stage trials for a coronavirus vaccine — this time, in about two months. Read more

Amid a global pandemic, the Christian story of Easter shows us the power of hope. By Reverend William Barber and Dr. Leah Hunt-Hendrix / The Guardian

In the midst of this world’s deepest darkness, the Christian story of the resurrection points towards the power of hope. As we weather a global pandemic, Easter offers a moment for us to reflect on the role of suffering and the possibility of radical solidarity. Read more

Amid Coronavirus, America Needs a More Just Society. The Editorial Board / NYT

The present crisis has revealed the United States as a nation in which professional basketball players could be rapidly tested for the coronavirus but health care workers were turned away; in which the affluent could retreat to the safety of second homes, relying on workers who can’t take paid sick leave to deliver food; in which children in lower-income households struggle to connect to the digital classrooms where their school lessons are now supposed to be delivered. Read more

Voter Suppression by Pandemic. By Kevin Townsend / The Atlantic

Wisconsin voters faced a choice this week: risk your health or lose your vote. Those were the stakes on Tuesday, says Sherrilyn Ifill, the president and director-counsel of the NAACP Legal Defense Fund. “I don’t know that it gets more stark, really more humiliating for us as a democracy,” she tells staff writer Edward-Isaac Dovere on an episode of The Atlantic’s politics podcast The Ticket. Listen here

Also see, Voter Suppression in Wisconsin Could Go Nationwide in 2020. By Ruth Conniff / The Progressive

The president is the latest in a long line of conservative politicians to see minority voters as a threat. By David W. Bllight / NYT

On March 30, the Republican id burst forth when President Trump said that the latest congressional stimulus bill “had things — levels of voting that, if you ever agreed to it, you’d never have a Republican elected in this country again.” Two days later, the Republican House speaker in Georgia, David Ralston, admitted that an expansion of absentee voting would be “extremely devastating to Republicans and conservatives in Georgia.” Read more

In Part 2 of our interview, family physician and epidemiologist Dr. Camara Phyllis Jones explains why the coronavirus is taking a devastating toll on black Americans. “People who are devalued and those people with limited opportunity are going to be impacted the worst,” says Dr. Jones. She also outlines principles for “valuing all individuals and populations equally” and achieving health equity. Her recent piece for Newsweek magazine is headlined “Coronavirus Disease Discriminates. Our Health Care Doesn’t Have To.” Watch here

Color of Covid: The racial justice paradox of our new stay-at-home economy. By Catherine Powell / CNN

An underexplored dynamic is what New York radio host Brian Lehrer aptly described, during a recent interview with Congresswoman Alexandria Ocasio-Cortez, as a “racial justice paradox:” while “black and brown people are more likely to lose their jobs in the crisis (and suffer food and housing insecurity),” he said “they’re also more likely to be the ones asked to keep their jobs and have risky contact with other people.” Read more

How to Save Black and Hispanic Lives in a Pandemic. By The Editorial Board / NYT

Across the United States, black and Hispanic people suffer disproportionately from poverty, poor health care and chronic diseases like diabetes, hypertension and asthma. Now the data, when it is available, shows that black and Hispanic Americans are dying of the coronavirus disease at rates far higher than white Americans. The racial disparities may be predictable, but they are tragic nonetheless. Public health experts say there are actions that states and cities can take right now to help save lives. Doing so would help protect all vulnerable people. Read more

Coronavirus could ‘decimate’ Latino wealth, which was hammered by the Great Recession. By Suzanne Gamboa and Nicole Acevedo / NBC News

Millions of Latino families were just bouncing back from losing 66 percent of their household wealth, lagging far behind their white peers. During the Great Recession, Latino median household wealth plummeted from $18,359 in 2005 to $6,325 in 2009, the largest of any racial or ethnic group, according to Pew Research Center. Read more

Our Schools Were Racist Before COVID-19. Here’s How They Could Get Worse. By Rann Miller / The Progressive

With in-person education nationwide stalled due to the pandemic, it’s not at all clear when public school systems will restart. But one thing we can be sure of is that, when students eventually return to school, there likely will be some new iteration of racism in the education system. If American history has taught us anything, it’s that racist policies are never eliminated. They’re only replaced with more sophisticated methods of maintaining racism’s stranglehold on black people and our society. Read more

As public officials last week decried the racial disparity and its link to social conditions, the emergence of the issue also had a perverse effect. It apparently made it easier for some people living farther away to see the virus as someone else’s problem. That is where the issue of racial disparity in death rates highlights the overall difference in the way America is experiencing COVID-19. And that difference largely follows the dividing line between urban and rural America. Read more

Encouraged by the pain, suffering, misery and distraction caused by the coronavirus pandemic, Donald Trump is continuing his assault on American democracy and the rule of law. Palast warns that mail-in voting as it currently exists is likely to guarantee Donald Trump’s victory in the 2020 election. He also explains how the Supreme Court decision on the Wisconsin primary election was really about purging nonwhite voters in order to maximize Trump’s chances of winning that key battleground state. Palast says, however, that the Democratic Party’s new mail-in voting proposals can be improved so that the will of the American people can be fully realized at the ballot box — which will likely ensure Trump’s defeat in November. Read more

The HBO miniseries The Plot Against America, which wraps up after six episodes next week, is timely and urgent—but these very qualities might work against it. Audiences in hard times are notorious for their love of light entertainment. An alternative history, the series is set in a world where Charles Lindbergh won the presidency on an isolationist platform in 1940. The aviator politician goes on to make an informal alliance with Nazi Germany while stirring up anti-Semitism at home. A major decision faced by the Jewish characters in the story is whether to stay in an increasingly hostile America or seek refuge in Canada. Read more

Also see, The Frightening Lessons of Philip Roth’s “The Plot Against America.” By Richard Brody / The New Yorker

NBA players urge colleagues to get financially educated during work stoppage: ‘Don’t look at this as a timeout,’ Chris Paul says. By Jabari Young / CNBC

With the coronavirus pandemic keeping the sports industry on pause, players from across the National Basketball Association are urging their colleagues to use the downtime to examine finances and prepare for a possible change in the league’s revenue landscape. “Don’t look at this at this as a timeout,” Oklahoma City point guard Chris Paul told CNBC in an interview. “Look at this as an opportunity to get stronger in however way you see fit. If financial literacy is one of them, which I think that is for a lot of us, then dive in.” Read more