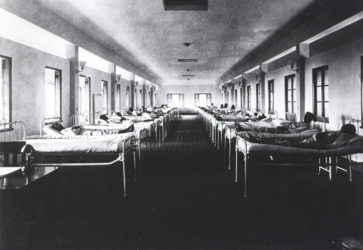 Featured – In 1918 and 2020, race colors America’s response to epidemics. By Soraya Nadia McDonald / The Undefeated

In American epidemics, race is a preexisting condition. Whether it’s the influenza pandemic of 1918 or COVID-19 over a century later, race and ethnicity have been, and continue to be, enormous factors in determining whether people will receive medical attention when they become ill, and the sort of attention they will receive. Read more

Health issues for blacks, Latinos and Native Americans may cause coronavirus to ravage communities. By Deborah Barfield Berry / USA Today

Blacks, Latinos and Native Americans have many underlying health conditions, including asthma and heart disease, that could make them more vulnerable to complications from the coronavirus, leaving advocates, lawmakers and public health experts worried these long marginalized communities won’t get equal access to tests and treatment as the outbreak spreads.  Read more

And see, Days After a Funeral in a Georgia Town, Coronavirus ‘Hit Like a Bomb’

How Racial Health Disparities Will Play Out in the Pandemic. By Julia Craven / Slate

The initial CDC recommendations discouraged doctors from testing every patient who came in with a fever, coughing, and difficult breathing. A test, they said, should only be performed if those symptoms presented in someone who had recently traveled to an area where COVID-19 cases were prevalent, or if they had come into close contact with someone who had already been diagnosed with the coronavirus. In the Brooklyn urgent care center where Dr. Blackstock (shown) does part-time clinical work, she says, she noticed early on that most of the patients who answered “yes” to those two questions were affluent and white. The majority of her Black patients said “no.” Read more

Democratic lawmakers are calling out an apparent lack of racial data that they say is needed to monitor and address disparities in the national response to the coronavirus outbreak. In a letter sent Friday to Health and Human Services Secretary Alex Azar, Sen. Elizabeth Warren and Rep. Ayanna Pressley, both from Massachusetts, said comprehensive demographic data on people who are tested or treated for the virus that causes COVID-19 does not exist. Over the weekend, cities with large black and nonwhite Hispanic populations emerged as new hot spots for the spread of the virus. Read more

Asian American athletes speak out against coronavirus racism. By Martenzie Johnson / The Undefeated

Gymnast Katelyn Ohashi and NFL safety Taylor Rapp are tackling the issue. In late February, a 68-year-old Asian man was collecting recyclables in the Bayview neighborhood of San Francisco to help support his family when he was attacked and harassed by a group of mostly black men in an apartment complex parking lot. One man stole the elderly man’s grocery cart full of bags of cans, and when the Asian man attempted to get the cart back, he was attacked with what looked like a broom as more than a dozen others jeered and laughed. Read more

Also see, ‘I am not a virus.’ How this artist is illustrating coronavirus-fueled racism

It was good to see #WeLoveYamiche trending on Twitter after President Donald Trump once again openly disrespected black female journalist Yamiche Alcindor, who is the White House correspondent for PBS NewsHour. Thousands of people took to Twitter to show support as fellow journalists, viewers, friends, fellow Alpha Kappa Alpha (AKA) sorority members, activists, and politicians all stood in solidarity with Alcindor, who has remained calm and focused throughout it all. Read more

The coronavirus crisis will determine whether Trump is a one-term president, but it may reshape the social order far more. By Thomas B. Edsall / NYT

On March 26, Pew Research released results of a survey that showed significant demographic and partisan differences in responses to the question “Has someone in your household lost a job or taken a pay cut as a result of Covid-19?” In both cases, significantly higher percentages of young people, minorities, low-wage earners and Democrats reported adverse impacts on their households than did older, white, high- income Republican respondents. Read more

Republicans are still playing games with D.C. at the height of a deadly pandemic. By Editorial Board / Wash Post

When D.C. Del. Eleanor Holmes Norton (D) saw the $2 trillion coronavirus relief bill drafted by the Senate ahead of Thursday’s vote, she assumed it was an oversight that D.C. was classified as a territory and not a state. The District, after all, is almost always treated as a state when it comes to federal funding formulas. But, no, this was no drafting error. It was intentional — a clear sign of pathetic pettiness on the part of Republicans, playing political games even at the height of a deadly pandemic. Read more

A Preventable Cancer Is on the Rise in Alabama. By Eyal Press / The Nation

The state’s refusal to expand Medicaid is causing poor women and women of color to miss out on lifesaving screenings. The Human Rights Watch report found that Alabama women without medical insurance routinely delayed getting care, “which, for some, meant that gynecological cancers weren’t found until symptoms developed to more advanced stages.” Read more

Missouri man planned to bomb hospital during pandemic to get attention for white supremacist views. By Pete Williams / NBC News

A Missouri man who was killed last week was planning to set off a bomb at a hospital to further his radical white supremacist ideology, federal authorities said Monday. Timothy Wilson, 36, died March 24 when the FBI sought to arrest him after a six-month investigation. The FBI said Wilson’s plot reflects a trend among white supremacists who are “seeking to maximize their audience and the dissemination of their message.” Read more

When it comes to the critics, Marvin Gaye’s 1971 masterwork “What’s Going On” is considered to be one of the greatest records of all time. But don’t take our word for it. As the singer-songwriter’s own words reveal, it’s an LP that came straight from the heart as he attempted to deal with the beguiling aspects of a rapidly encroaching world — perhaps not that different from our own. Read more and Listen here

A’Lelia Bundles Is On A Mission To Tell The Truth About Madam C.J. Walker. By Philip Lewis / HuffPost

The new Netflix miniseries, “Self Made: Inspired by the Life of Madam C.J. Walker,” has sparked a renewed interest in the life of the famed entrepreneur, and A’Lelia Bundles is grateful for it. “Millions of people now know who Madam Walker is,” Bundles, who wrote the biography that inspired the four-part miniseries about the cosmetics and hair care mogul, told HuffPost. “Now it gives me an opportunity to tell Madam Walker’s story and to tell the facts of the story.” Read more

HBO’s recent release of a prestige adaptation of Philip Roth’s 2004 novel The Plot Against America makes it worthwhile to examine whether fascism is really so alien to the United States as many wish to believe. After all, the public prominence of the Ku Klux Klan and the massive riots that rock the climax of Roth’s novel were already regular features of American life, depending upon where you lived. For example, in early May 1927, just a few weeks before the historical Lindbergh took off from Roosevelt Field in the Spirit of St. Louis, some 5,000 whites rioted in the black business district of Little Rock, Arkansas, where they burned the body of man named John Carter. Local police officers, many rumored to be Klan members, did nothing to stop the violence—and may have even taken part. Read more

Netflix’s “Uncorked” spills the real truth about rejection and privilege in pursuit of passion. By D. Watkins / Salon

The new Netflix original film “Uncorked” written and directed by “Insecure” executive producer Prentice Penny captures an energy that’s far too common in modern culture in regards to what we pursue, why we pursue it, and the way we dream. We all should be paying attention. “Uncorked” stars Mamoudou Athie as Elijah, a young aspiring master sommelier from a family and community in Memphis where master sommeliers don’t really exist. When he first introduces the idea of hsi dream job to his family, they misunderstand and think he aspires to be Somali and ask why he wantesto be a “pirate.” Throughout the film, Elijah is in constant conflict with his father Louis, played by Courtney B. Vance, who runs a successful barbeque business that he is in the middle of expanding. Louis inherited the business from his dad and always had a vison of passing it down to Elijah. Read more