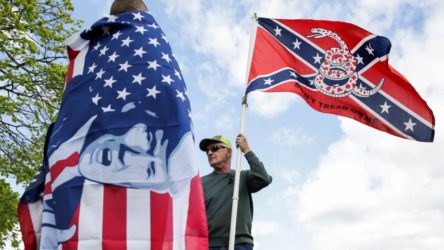 Featured – ‘Open the Economy’ Protesters Only Care About White Lives. By Michael Harriot / The Root

What is America? Is it a plot of dirt littered with the discarded bones of those who stood in the way of white manifest destiny or is it a Constitution? Is it an assemblage of huddled masses yearning to breathe free or is it simply a series of borders on a map? Is the idea of liberty and justice even a real thing or is it an apparition that only white people can see? Read more

Why the Virus Is a Civil Rights Issue: ‘The Pain Will Not Be Shared Equally.’ By Audra D. S. Burch / NYT

Rallies and marches and other traditional forms of protest are out, given the social distancing restrictions now in place from coast to coast, but activists are organizing campaigns nonetheless aimed at what is emerging as the latest front in the country’s civil rights struggle: the disproportionate impact of the coronavirus on communities of color. Read more

On Monday, Georgia’s governor, Brian Kemp, announced his decision to reopen the state for business. Non-essential businesses, including tattoo parlors, hair salons, movie theaters and bowling alleys, will be authorized to reopen from Friday, if they follow social distancing orders. In a state where African Americans make up more than 32% of the population but account for an estimated 54% of known coronavirus deaths, the decision pitted a white Republican governor against mostly black Democratic mayors and critics. Read more

The Michigan Coronavirus Task Force on Racial Disparities is expected to study and investigate the causes of the disproportionate effects of COVID-19, the disease caused by the new coronavirus, and recommend immediate actions to address the disparities and the systemic racial inequities behind them. The executive order cited data showing Black residents make up a staggering 40% of COVID-19 deaths in Michigan despite representing 13.6% of the state’s population. Read more

In crafting a new COVID-19 relief bill, listen to the most vulnerable voices. By Stacey Abrams, Rebecca Dixon and Stacy McLouglin Taylor / Salon

COVID-19 threatens millions of people in the United States. The ability to cope with this crisis will vary enormously across regions and communities. For some, the economic fallout is new. For others, it is an amplification of long-standing economic challenges, including low pay, scarce benefits, discrimination, unaffordable basic needs and overall insufficient public investment in programs that provide economic stability. Read more

Trump wants a scapegoat, as always — but an immigration ban won’t slow the pandemic or enable widespread testing. By Amanda Marcotte / Salon

This was so inevitable that it’s genuinely difficult to muster the appropriate level of outrage: Donald Trump, who spends his 20-plus waking hours a day grasping desperately for a scapegoat to distract from his own failures to slow the spread of the coronavirus and prevent the country from economic collapse, has declared that he’s going to ban immigration.  Read more

A black man in his 60s had contracted coronavirus and was having trouble breathing when he arrived at an urgent care facility in Brooklyn last week. Dr. Uché Blackstock told him he needed to get to a hospital. “I’m not going to go there and die,” the man responded, Blackstock recalled in an interview. “I’d rather go home, cause I know at least at home I’m safe.” The man left the facility with clear instructions from Blackstock, but she said she doesn’t know where he ended up. Read more

Tim Wise on Trump, the coronavirus and the pandemic of white privilege. By Chauncey DeVega / Salon

As part of an ongoing series of conversations here at Salon, I recently spoke with Tim Wise about what the coronavirus pandemic reveals about the deadly consequences of white privilege and other forms of social inequality in America. Wise also explains how Donald Trump, as a white man (and a Republican), benefits from a level of presumed competence and intelligence not afforded to black and brown people. Moreover, if Donald Trump were not white he would long ago have been impeached and removed from office. Read more

Trump Reaches Back Into His Old Bag of Populist Tricks. By Thomas B. Edsall / NYT

White People Continue to Stand Alone in Their Support of Trump, Survey Confirms. By Anne Branigin / The Root

The Trump administration took Surgeon General Jerome Adams off television last week after his controversial remarks on Covid-19’s threat to minorities, silencing the White House’s loudest voice on racial disparities even as concerns mount about risks to communities of color. Read more

Coronavirus batters the Navajo Nation, and it’s about to get worse. By Kenzi Abou-Sabe, Cynthia McFadden, Christine Romo and Jaime Longoria / NBC News

It didn’t take long for one case to turn into two, and then 20. As of Monday, the Navajo Nation, which sprawls across three states, had 1,197 positive coronavirus cases. It has a per capita infection rate 10 times higher than that of neighboring Arizona and the third-highest infection rate in the country behind those of New York and New Jersey. Forty-four people have died, more than in 14 other states. Read more

I’m an Asian American doctor on the front lines of two wars: Coronavirus and racism. By Sojung Ji / Wash Post

Where are you from?” Those are the first words out of my patient’s mouth when I ask how I can help her today. A lifetime of being asked this question as an Asian American has prepared me to simply reply, “I’m from here.” Usually that dissipates the conversation, but today, my patient adds, “I’m not racist, I just don’t want to get the virus.” Read more

Reports Of Anti-Asian Attacks In NYC Have Skyrocketed Compared To This Time Last Year. By Marina Fang / HuffPost

Black voters have driven the trajectory of recent Democratic presidential nominating contests more than any other voting bloc. This was the case in 2008 and 2016 primaries, where they largely united behind a single candidate — Barack Obama and then Hillary Clinton. This year is no different. But the question is whether Democrats will earn enough of their support to win the White House. I ran her campaign for governor of Georgia in 2018 where more voters of color turned out than in the 2016 presidential election. Read more

How do you know voting by mail works? The U.S. military’s done it since the Civil War. By Alex Seitz-Wald / NBC News

It’s now easier in some ways for a Marine in Afghanistan to vote than it is for an American stuck at home during the COVID-19 lockdown. And some lawmakers and advocates want to use the rules that lets that Marine cast a ballot as a model for how all Americans could vote in the November presidential election if the pandemic continues. Read more

Practically any modern American historian can narrate a brief history of redlining in the United States. As the story goes, between the mid-1930s and the late 1960s, white buyers received essentially all of the loans approved or insured by the federal government (around 98% of such loans, or as many as 35 million total white households by some counts).1 Across these decades, this account continues, African Americans remained trapped in government public housing projects or were left to languish as tenants in privately built slums that, by the 1960s, made their communities fitting targets for urban renewal and the attendant development of even larger public housing projects. Read more

Discover the life and legacy of Lloyd Garrison Wheeler, the first black lawyer in Illinois. By Mitzi Miller / NYT

The history of black lawyers in Chicago began in 1869 when Lloyd Garrison Wheeler became the first black man admitted to the state bar. He made history again in 1873 when he won a groundbreaking civil rights case. This is his story. Read more

In Netflix’s ‘#blackAF,’ Kenya Barris dares you to laugh at — or with — a black Larry David. By Syreeta McFadden / NBC News

The real question “#blackAF” raises, though is: Is the world ready for a black Larry David? Is it — are we — ready to watch black humanity at the outskirts of the black experience — stupidly rich, possibly unlikeable, not truly relatable? If a show isn’t crafted for the white gaze, does it automatically speak to the black one? Read more

How ‘Mrs. America’ gives Shirley Chisholm her due — and exposes the limits of 1970s feminism. By Sonia Rao / Wash Post

In January 1972, just a few years after making history as the first black woman elected to Congress, Rep. Shirley Chisholm of New York publicly announced she would be running for president. “I am not the candidate of black America, although I am black and proud; I am not the candidate of the women’s movement of this country, although I am a woman, and I am equally proud of that,” Chisholm said to a crowd in Brooklyn. “I am the candidate of the people of America. And my presence before you now symbolizes a new era in American political history.” That era provides a setting for the FX miniseries “Mrs. America.” Read more