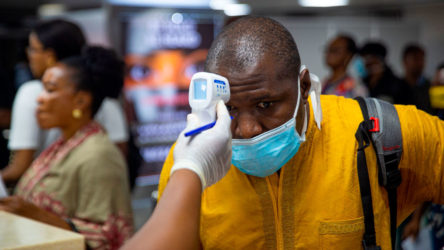 Featured – Early Data Shows African Americans Have Contracted and Died of Coronavirus at an Alarming Rate. By Akilah Johnson and Tahia Buford / Propublica

No, the coronavirus is not an “equalizer.” Black people are being infected and dying at higher rates. Here’s what Milwaukee is doing about it — and why governments need to start releasing data on the race of COVID-19 patients. As the disease spread at a higher rate in the black community, it made an even deeper cut. Environmental, economic and political factors have compounded for generations, putting black people at higher risk of chronic conditions that leave lungs weak and immune systems vulnerable: asthma, heart disease, hypertension and diabetes. Read more

The coronavirus pandemic has claimed the lives of tens of thousands of people around the world but it has taken a particularly painful toll on Detroit, where the growing list of deaths includes some of its most prominent citizens: state Rep. Isaac Robinson, 44; Capt. Jonathan Parnell, 50, the police department’s homicide chief; and Dwight Jones, 73, a legendary high school basketball coach. Read more

The Myth of Black Immunity: Racialized Disease during the COVID-19 Pandemic. By Chelsey Carter and Ezelle Sanford III / AAIHS

Shown is a Public health doctor giving tenant family medicine for malaria near Colombia, South Carolina, 1939. As the novel coronavirus 2019 (COVID-19) pandemic sweeps across the world, troubling associations between race and disease have gone viral. On social media, theories of Black people’s immunity to the novel coronavirus spread rapidly and widely, with the initially small number of cases in Africa often cited as evidence. Read more

The Economic Crash Is Going to Be Particularly Awful for Women and People of Color. By Kara Voght / Mother Jones

The 6.6 million Americans who filed for unemployment last week have earned themselves a grim superlative: They, along with the 3.2 million people who filed the week before, mark the fastest-growing unemployment disaster in recorded US history. These layoffs have been especially bad for two groups—namely, the same people who were particularly screwed over in the last recession: women and people of color. National unemployment numbers haven’t been broken down by demographics yet, but state numbers are looking dire for these groups. Read more

The Real Epidemic is Poverty. By Rev. Dr. William Barber II / The Progressive

With the coronavirus pandemic bringing our country’s equally urgent poverty crisis into stark relief, we cannot simply wait for change. It must come now. The moral crisis of poverty amid vast wealth is inseparable from the injustice of systemic racism, ecological devastation, and our militarized war economy. It is only a minority rule sustained by voter suppression and gerrymandering that subverts the will of the people. To redeem the soul of America—and survive a pandemic—we must have a moral fusion movement that cuts across race, gender, class, and cultural divides. Read more

Our Right to Vote in November is in Real Danger – But it Can Still be Saved. By Doug Gordon / Newsweek

If too many Americans avoid the polls on Election Day for fear of their health, that leaves an even smaller segment of the population with the power to choose our leaders for the next two to six years. This scenario has the potential to not only question the validity of our election results but also stymie the legitimacy of our representative democracy, no matter the victor. Solutions exist to ensure a safe and accessible election in November. The most widely discussed plan, which has been endorsed by the American Civil Liberties Union and pushed forward by legislation introduced by Senators Amy Klobuchar and Ron Wyden, would expand vote-by-mail nationwide. Read more

Also see, A president should want all Americans to vote. Why doesn’t Trump? By Editorial Board / Wash Post

Investigative reporter Robert Evans: “We’re on the edge of an authoritarian nightmare.” By Chauncey DeVega / Salon

I recently spoke to investigative journalist Robert Evans, who has reported from conflict zones in Iraq and Ukraine, as well as on far-right extremist groups in the United States. In our conversation, Evans explains how the average person can better navigate the challenges of life during the coronavirus pandemic and prepare for what comes next. He also discusses how the coronavirus pandemic has exposed rampant social inequality and how this version of capitalism has failed the American people and others around the world — and how from this crisis a new and better society can be created. Evans also offers a dire warning: The coronavirus pandemic may usher in a global surveillance society and authoritarian nightmare almost beyond comprehension. Read more

Black Bourgeois: A New Book about the Dilemma of Black Middle-Class Embodiment in the Post-Civil Rights Era.  By AAIHS Editors

At a moment in U.S. history with repeated reminders of the vulnerability of African Americans to state and extralegal violence, Black Bourgeoisis the first book to consider the contradiction of privileged, presumably protected Black bodies that nonetheless remain racially vulnerable. Examining disruptions around race and class status in literary texts, Candice M. Jenkins reminds us that the conflicted relation of the Black subject to privilege is not, solely, a recent phenomenon. Read more

Andrew Yang was wrong. Showing our ‘Americanness’ is not how Asian-Americans stop racism. By Canwen Xu / Wash Post

I grew up Asian American in North Dakota, South Dakota and Idaho, some of the whitest states in this country. I learned to speak accentless English. I had mostly Caucasian friends until college, and I learned to eschew the meek and submissive stereotypes that plague so many Asian Americans today. Did these things make people think I was American? Absolutely not. I was constantly asked where I was from — even though my race is the only indication that I could be from anywhere but the United States. Read more

Bill Withers Was the Definition of Timeless. By Bill Wyman / Vulture

It was the dog-end days of the 1960s. Psychedelia still hung like a haze in the air; Altamont’s bad taste lingered with it. Dylan was doing who knows what, the Beatles had broken up. The Black Panthers were both preparing for war and being entertained in Leonard Bernstein’s Park Avenue apartment. Four students were gunned down by National Guard troops at Ohio’s Kent State. And the Vietnam War was still going on — more than 10,000 dead in 1969 alone. Into this perfervid environment came the sane, level sound of Bill Withers, who began recording a series of low-key albums of calm and matter-of-fact singer-songwritership. Withers, who died earlier this week of heart complications at 81, had talent and an air of imperturbable gravity. That combination made his deceptively simple songs sound genuinely real — and somehow necessary. Read more

Ellis Marsalis, a pianist and educator who became the guiding force behind a late-20th-century resurgence in jazz while putting four musician sons on a path to prominent careers, died on Wednesday in New Orleans. He was 85. The cause was complications of Covid-19, the disease caused by the coronavirus, his son Branford said in a statement. Read more

Meghan Markle’s Elephant Voiceover Has Been in the Works Since 2017. By Erin Vanderhoof / Vanity Fair

When Meghan Markle and Prince Harry announced their desire to step back from the royal family in January, one small moment stood out as a sign that the couple had been planning their exit for quite some time. Footage of a conversation between Harry and Disney CEO Bob Iger in July showed the prince talking up his wife’s skills as a voiceover actor. On Friday, Meghan’s collaboration with Disneynature, Elephant is being released on Disney+, but according to People, the real inspiration for her participation happened back in 2017, when she and Harry visited Bostwana to assist the charity Elephants Without Borders. Read more

Jermaine Jenkins was previously Venus William’s hitting partner, but he’s been able to forge out and make a name for himself as a coach. From February to September of this year, he’s been coaching the formerly top-ranked Naomi Osaka, who is the current reigning Australia Open champion. He also joined the USTA team in January when he was named as a coach for the USTA National Campus in Orlando. Jarmere Jenkins played for a few years himself, breaking into the top 200 in the world sometime in 2015. However, he was forced to retire due to the growing cost of travel, but Jermaine was able to use his connection with Venus to get him his current gig of being Serena’s current hitting partner. Read more

Kobe Bryant Elected To Hall Of Fame In Posthumous ‘Peak Of His Career.’ By Colin Dwyer / NPR

Just over two months after Kobe Bryant’s death shocked the world, his career has received his sport’s highest honor: The Los Angeles Laker legend headlined the list of players selected to the Basketball Hall of Fame. The 2020 class announced Saturday may be one of the most superstar-laden crops of inductees in the sport’s history. Along with Bryant, it includes: Tim Duncan, who won five NBA championships and two MVP awards as the face of the San Antonio Spurs; Kevin Garnett, who won his own title and an MVP award during a 21-year career mostly with the Boston Celtics and Minnesota Timberwolves; and Tamika Catchings, who stands third on the the WNBA’s list of all-time leading scorers. Read more