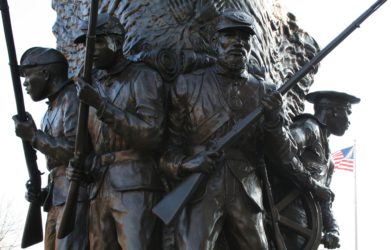 Featured – A new statue of Lincoln will adequately honor him alongside Black Americans. By Frank Smith / Wash Post

Those bold troops, standing erect, battle-worn and battle-ready. We believe this is the description of the monument that abolitionist Frederick Douglass said he would like to see. The Lincoln statue will be placed in appropriate context as it positions him directly across the street facing the “Spirit of Freedom” monument — our memorial honoring the 209,145 United States Colored Troops who, freed from enslavement, took up arms for freedom — and the Wall of Honor listing each of their names. Read more

Related: George Mason University is named for a slave-owning Founding Father. Let’s talk about that. By Gregory Washington / NBC News

Lynchings are part of Georgia’s history — and the state’s present. By Sandy Hodson / USA Today

The backstory  to many accounts of lynching often boils down to Blacks voting, earning more than neighboring whites or committing perceived slights to white supremacy, according to the Equal Justice Initiative. One of worst times for Black people  was after the Civil War, according to a recent study released by the Equal Justice Initiative, “Reconstruction in America.” In 12 years, from 1865 to 1876, at least 2,000 Black people were lynched. Read more

Related: George Floyd’s death ignited a racial reckoning that shows no signs of slowing down. By Eliott C. McLauglin / CNN

Trump Supports Housing Segregation—and So Do a Lot of White Liberals. By Kali Holloway / The Nation

In a 2009 study, researchers found white people indicated that, compared with integrated and all-Black neighborhoods, “all-white neighborhoods were most desirable.” A report from Harvard published this January noted, “Despite parents’ espoused support for integration, in districts where parents are actually given greater opportunities to choose schools, schools appear to become more segregated.” Read more

Related: Trump’s Racist Appeal To The Suburbs Is Backfiring. By Peter Dreier / TPM

Related: Trump voters haven’t been driven by racism. If anything, it has repelled them. By Musa al-Gharbi and Paul F. Lazarsfeld / NBC News

Trump and His Allies Think They Know Who Counts. By Jamelle Bouie / NYT

The census, as Trump and his allies correctly understand, is a critical source of dynamism within the American political system. A political majority (or in Trump’s case, a minority) can try to insulate itself from demographic shifts and transformations, but the fact of mandatory reapportionment makes that difficult. New people — whether immigrants or Americans moving from place to place — will always mean new politics. Read more

Related: Don’t Fall for Trump’s Census Bait-and-Switch. Latinos should not let the president intimidate them into not being counted. By Janet Murguia / NYT

After a summer of protest, racial justice is sure to be on voters’ minds across the country in November. In California, though, race will literally be on the ballot, as voters in the Golden State gear up for a fight over whether to end a nearly quarter-century ban on affirmative action. Ending the ban would demonstrate how far California has traveled in 24 years — just as the debate surrounding it illustrates how far the United States has yet to go to become a truly equal nation. Read more

Related: A Call to Action from University of Chicago Faculty. By AAIHS Editors

Related: Black at U.T., and Beyond. A student set out to document the  experiences of his Black classmates on their predominantly white campus. By Adraint Bereal and Patrice Peck / NYT

Related: The Supreme Court Doesn’t Like to Talk About Race. By Neil S. Siegel / The Atlantic

“If we go down this path to re-examine what policing looks like, we need to make sure we know what really works. We need to look at what our potential outcomes will be,” says Joseph Schafer, a professor of criminology and criminal justice at St. Louis University. “If you were going to sit down and create a policing system from scratch, it wouldn’t look like what we have right now.” Read more

The wall of moms lined the tumultuous streets of Portland, Ore., placing their bodies, clad in bright yellow shirts, between fellow protesters and law enforcement. The women stood arm in arm, shoulder to shoulder, wearing armor reflective of their privileged lives: scuba masks, shiny bike helmets and white skin. The allies had arrived. To be an ally is to step into a fight that is ostensibly not your own. These maternal allies stood beside Black protesters in their demand for racial justice and police reform. Read more

A confluence of events has created a moment for a Georgia pastor to take a Senate seat away from warring Republicans. By Paul Kane / Wash Post

Warnock, as senior pastor of Ebenezer Baptist Church, oversaw the nationally televised funeral of John Lewis, the congressman and civil rights icon whose stature brought three presidents to Warnock’s pulpit for eulogies. His bid to become Georgia’s first Black senator had already begun to find its footing after the death of George Floyd in Minneapolis and the ensuing protests. And Tuesday, as the WNBA launched its pandemic-delayed season, many players adorned “VOTE WARNOCK” warm-up shirts before games, including those on the Atlanta Dream. Read more

Coronavirus relief favors white households, leaving many people of color at risk of being evicted. By Taylor Miller Thomas / Politico

Federal housing aid during the coronavirus pandemic disproportionately benefits white households over minorities, with Black households most at risk, a POLITICO analysis has found. The federal assistance favors homeowners over renters, and because white households are more likely to own homes — a long-standing trend with roots in racist housing policy — they have more access to aid. Read more

Black and Hispanic children are disproportionately affected by COVID-19, according to two Centers for Disease Control and Prevention reports published Friday. The CDC reports come just days after President Donald Trump told Fox News that children are “almost immune” to the coronavirus, an assertion proven to be untrue. Read more

A white person and a Black person vote by mail in the same state. Whose ballot is more likely to be rejected? By Jane C. Timm / NBC News

“As a person of color, the worry that my vote won’t get counted is always there,” King, who works at a nonprofit community advocacy group in Albany, said in an interview. “It’s not because we don’t trust the system, it’s because the experiences we have had. History has taught us that people of color — our vote does not get counted when it really matters.” Read more

Nearly 80 percent of Veterans Affairs employees surveyed by their workers union in July said endemic racism within the federal government’s second-largest organization is a moderate or serious problem, with more than half reporting they have witnessed discrimination against the veterans whom the agency serves. Read more

Black women account for less than 3% of U.S. doctors. Is health care finally ready to face racism and sexism? By Maria Aspan / Fortune
“Study after study shows the positive benefits of having a diverse workforce in providing health care,” she adds. “Training, recruiting, and retaining diverse providers—providers of color, Black women, Black men—that’s important.” The need for a more diverse workforce, and many employers’ repeated failures to create one will likely resonate for Black employees and other workers of color across industries, as Fortune’s Working While Black project and RaceAhead newsletter have chronicled. Read more

The Battle Between W.E.B. Du Bois and His White Editor Was an Early Reckoning Over Objectivity. By Jacob Rosenberg / Mother Jones

Lewis mentions an incident I have not heard much discussed: the censorship of Du Bois by a white editor at the Encyclopedia Britannica named Franklin Henry Hooper. This happened in 1929. A century later, the incident and its implications chime with Lowery’s observations about editors seeing the work of Black people as hopelessly biased and “the views and inclinations of whiteness” as the “objective neutral.” Read more

Backlash: What Happens When We Talk Honestly About Racism in America. By George Yancey / Audiobook

When George Yancy penned a New York Times op-ed entitled “Dear White America” asking white Americans to confront the ways that they benefit from racism, he knew his article would be controversial. But he was unprepared for the flood of vitriol in response. In Backlash, Yancy expands upon the original article and chronicles the ensuing controversy as he seeks to understand what it was about the op-ed that created so much rage among so many white readers. He challenges white Americans to rise above the vitriol and to develop a new empathy for the African American experience. Listen here

With his camera, Gordon Parks humanized the Black people others saw as simply criminals. By Sebastian Smee / Wash Post

In 1957, Gordon Parks accepted an assignment from Life magazine, where he had been a staff photographer for a decade — the first African American to hold such a position — to explore crime in America. An interesting gig. How to tackle it? Parks traveled for six weeks, visiting Chicago, San Francisco, Los Angeles and New York. Many of his photographs were taken at night and on the street. He photographed crime scenes, police stations and prisons. He captured the dramatic moment when detectives kicked down a door in a raid. Read more

Louis Gossett Jr. Is An Optimist. To Survive Hollywood, He’s Had To Be. By Matthew Jacobs / HuffPost

Spend an hour talking to Louis Gossett Jr., and you might hear any or all of the following names: Marlon Brando, Sidney Poitier, Anne Baxter, James Garner, Bob Dylan, Liza Minnelli, James Earl Jones, Harry Belafonte, Maggie Smith, Elia Kazan, Jesse Jackson, Paul Newman. They are friends and colleagues of his, sources of inspiration, evidence of a life well lived. Gossett is 84. He speaks quickly, so the references fly by. Beware of whiplash. Altogether, they’re enough to make you wonder why someone who took acting classes with Marilyn Monroe and made his first movie with Ruby Dee went so long without a role as complex as Will Reeves, the vigilante he portrayed last year on HBO’s “Watchmen.” Read more

The NBA’s Board of Governors and the National Basketball Players Association have finalized plans to create the first NBA Foundation that will work to spur economic growth in the Black community, announcing Wednesday that the initial contribution will be $300 million over the next decade. Read more

Related: This is what happens when the liberal WNBA and a Republican senator collide. By Harry Enten / CNN