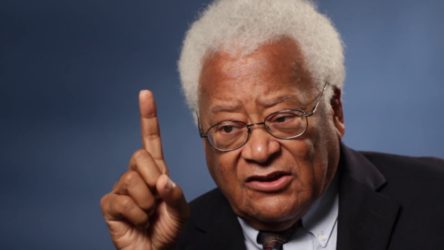 One of the highlights of John Lewis’s funeral on July 30 was being able to see and hear Lewis’s mentor, the Reverend James M. Lawson Jr., now ninety-one. In his twenty-one-minute eulogy at Atlanta’s Ebenezer Baptist Church, Lawson recounted the accomplishments of the civil rights movement, and the work that still needs to be done. “We will not be silent while our economy is run by plantation capitalism,” Lawson said. Read more

We have never seen a nominee like Kamala Harris before. By Julia Craven / Slate

On Tuesday, former Vice President Joe Biden, the Democratic nominee for president, selected Sen. Kamala Harris to be his running mate. The significance of this decision cannot be overstated. Harris is the first Black woman, the first Asian woman, and the first graduate of a historically Black university to be selected as the running mate for a major-party candidate. And, should the ticket be successful in November, she’d be the first woman with such a multifaceted identity to be elected vice president. Read more

Related: In Kamala Harris, a Choice at Once Safe and Energizing. By Jonathan Martin and Astead W. Herndon / NYT

Related: Twitter may not like it, but Kamala Harris was probably the right choice. By Amanda Marcotte / Salon

Every ‘Squad’ Member Won Her Primary. By Daniel Marans / HuffPost

Reps. Ilhan Omar, Rashida Tlaib, Ayanna Pressley and Alexandria Ocasio-Cortez are virtually certain to head back to Congress. And new allies are joining them. “Despite all the manufactured hype and money spent attacking them, the Squad is winning, it’s growing, and is here to stay,” Justice Democrats executive director Alexandra Rojas said in a statement. Read more

Hispanic and Black voters in a Philadelphia County requested mail ballots on average several days later than their white counterparts during the primary, according to an internal analysis by a voting rights group. Later application submissions, in turn, decreased the likelihood that those ballots were returned, the Pennsylvania chapter of All Voting Is Local found. Read more

In a time when institutions across the country have undergone a searching self-examination, the reckoning has only begun for the most powerful source of institutional racism in American life: the United States Senate. It is not merely a problem of legacy and culture — though the Senate’s traditions are deeply interwoven with white supremacy, as Joe Biden inadvertently confessed when he touted his cooperation with segregationists — but of very-much-ongoing discrimination. Quite simply, achieving anything like functional racial equality without substantially reforming the Senate will be impossible. Read more

In the Wake of Protests. By Charles M. Blow / NYT

We are in a period of post-mortem reflection following the time during which racial justice protests were at their most intense. We now must ask ourselves: What has changed and what hasn’t? Have power and privilege truly been disrupted? Has oppression been alleviated? What will be the legacy of this moment? Read more

Related: Do voters want “back to normal” or big, sweeping change? Maybe it’s both at once. By Andrew O’Hehir / Salon

The nation’s wealthiest Black man called on corporate America to step up and address inequities in society, saying companies that profited from the historic slave trade should consider paying reparations. Robert Smith, who made headlines last year when he shocked the graduating class of the historically Black Morehouse College with news that he was paying off their student debts, opened up about the private sector’s role in racial justice in an interview with Reuters published Wednesday. Read more

The 1619 Project and the ‘Anti-Lincoln Tradition.’ By E. James West / AAIHS

For much of the century following Lincoln’s death in 1865, the president was held in high esteem within Black American communities. However, such sentiments should not obscure the complexity of Lincoln’s relationship to Black America – something embodied through his most prominent Black critic and admirer, Frederick Douglass, who in the years following Lincoln’ death would alternatively describe him as both ‘the Black man’s president’ and ‘preeminently the white man’s president.’ Read more

Related: Amid a racial reckoning, teachers are reconsidering how history is taught. By Daniella Silva / NBC News

It took the better part of a century to pass a law saying American women had the right to vote. Three generations of women, and their male allies, worked tirelessly to make the 19th Amendment — which decreed that states could not discriminate at the polls on the basis of sex — a reality. Read more

Related: The Black sorority that faced racism in the suffrage movement but refused to walk away. By Sydney Trent / Wash Post

Racism’s Hidden Toll. In America, how long you live depends on the color of your skin. By Gus Wezerk / NYT

What’s been going on for hundreds of years is the systematic neglect of Black Americans’ health. In 2018, Black people died at higher age-adjusted rates than white people from nine of the top 15 causes of death. Read more

Related: America is failing Black moms during the pandemic. By Anna North / Vox

40 Confederate symbols have been removed since the death of George Floyd, SPLC says. By Christina Walker / CNN

At least 40 Confederate symbols have been removed from across the US since George Floyd‘s death in May, according to the Southern Poverty Law Center. From 100-year-old monuments to a state flag, a total of 45 have been removed or relocated from public spaces, the SPLC reported. And another 14 have been renamed, such as schools and roads. Read more

It was “fundamentally unfair” for the trial judge to allow Bill Cosby’s damaging deposition from a sex accuser’s lawsuit to be used against him at his criminal trial because he believes he had a forever-binding promise from a prosecutor that he could never be charged in the case, his lawyers argued in an appeal filing Tuesday. Read more

Recorded by Billie Holiday and Nina Simone, sampled by Kanye West and Rapsody, and streamed by the millions, the anti-lynching song has taken on a new relevance in the era of Black Lives Matter. Read more

100 Years Ago, ‘Crazy Blues’ Sparked a Revolution for Black Women Fans. By Daphne A. Brooks / NYT

This week marks the 100th anniversary of Mamie Smith recording “Crazy Blues,” African-American women’s breakthrough into the mainstream recording industry — a feat that is stunning and impactful, yet so often misunderstood or forgotten that most people would be hard pressed to name the artist whose smash altered the course of pop. Read more

Bob Ryland loved tennis until the very end. By Jerry Bembry / The Undefeated

Even at 100 years old, Robert “Bob” Ryland, the first Black man to crack the racial barrier on the mainstream professional tennis tour, maintained a thirst for the game. Quenching that thirst in recent weeks often saw Ryland at home with his hearing aid, intently listening to programming on the Tennis Channel. Read more

Zozibini Tunzi, a Black woman with afro hair, grew up reading fashion and beauty magazines that did not contain images of women who looked like her. So when she was crowned Miss South Africa one year ago, Tunzi felt on top of the world. Four months after her national victory, she was actually on top of the world, at least by title — as 2019 Miss Universe, advancing over women from 89 countries in one of the most prestigious annual beauty pageants. Read more
Visit our home page for more articles, book/podcast and video favorites. And at the top of this page register your email to receive notification of new editions of Race Inquiry Digest. Click here for earlier Digests. Use the buttons below to share the Digest in an email, or post to your Facebook, Linkedin or Twitter accounts.