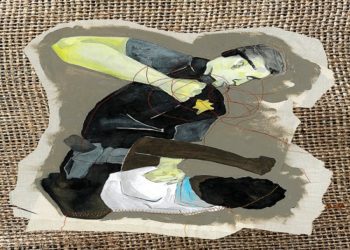 This particular bogeyman is a phantom born of slavery, a fear embedded in the DNA of post-slavery society grounded in the recognition that orchestrated and professionalized violence might not be enough to preserve the shaky foundations of racial hierarchy. The fear of being outnumbered and overrun by the indignant and unforgiving masses is that thing that goes bump in the night—the gnawing insecurity that the paddy rollers in the antebellum countryside would take care of while the misnamed keepers of the peace tucked in the owners and the elites for the night. Read more

Does America Need a Truth and Reconciliation Commission? By Sarah Souli / Politico

Employed in various forms in at least 46 countries—from South Afrca to Peru to Canada—these commissions have a track record of helping societies to at least begin to move beyond otherwise intractable problems, including dictatorship (Argentina), genocide (Rwanda), civil war (El Salvador), ethnic conflict (Solomon Islands) and revolution (Tunisia). If ever there has been a time for the United States to undergo a similar process, there’s a strong argument that moment is now. Read more

Kamala Harris and history: With America at a crossroads, her role will be crucial. By Chauncey DeVega / Salon

Harris is an excellent choice because her selection signals that, at least in the 2020 election, the Democratic Party appears to be more concerned with serving its base and long-term electoral interests instead of engaging in painful hand-wringing over the importance of appealing to “swing voters.” the “white working class” or some other imagined group of right-leaning, predominantly white independents. In short, Kamala Harris as the Democratic Party’s 2020 vice presidential nominee is good political strategy. Read more

Related: Republican efforts to deny Senator Harris’s identity as an African-American and turn her into a noncitizen are destined to fail. By Jamelle Bouie / NYT

Related: Is Kamala Harris Black or South Asian? Why her identity is complicated. By Nisha Chittal / Vox

Indians should use the historic VP selection of Kamala Harris to reckon with our own anti-Blackness. By Sharmita Sen / Wash Post

Rushing to celebrate our achievements — impressive household incomes, new-construction homes, millennia-old gods, low divorce rates, high SAT scores — we have, on occasion, silently accepted the badge of honorary whiteness. There are historical and legal reasons for this. When Indians in America quietly shift toward White adjacency, most are not interested in actually being White; they are distancing themselves from Blackness. Anti-Black racism within the Indian community is a heady mixture: made-in-India colorism, socially engineered anti-Black bias of the British imperial strain, and indigenous, all-American racism. Read more

In 1968, Chisholm was the first Black woman to win a seat in Congress, and four years later, she ran for the Democratic presidential nomination against Sen. George McGovern, pushing a platform focused on racial and gender equity. Read more

Trump, Biden and race: A history. Two men shaped by a different era are vying to lead America through a reckoning. By JM Rieger / Wash Post

On Sept. 5, 1989, Donald Trump and Joe Biden appeared on nationally televised broadcasts that aired less than an hour apart, both making statements that were revealing about the legacies they were creating on issues of race. Biden that night criticized then-President George H.W. Bush for being too soft on crime, and Trump told NBC News that “well-educated” Blacks have an “advantage” in business. Read more

Trump Had No Response When Asked If He Regrets All His Lies. By Josephine Harvey / Huff Post

HuffPost senior White House correspondent S.V. Dáte asked the president during Thursday’s coronavirus task force briefing if, after 3½ years, “do you regret at all all the lying you’ve done to the American people? All the dishonesties?” “That who has done?” Trump replied. “You have done,” said Dáte, who wrote at length about Trump’s “Ministry of Untruth” earlier this year. Trump paused and then moved on to the next question. Read more

Related: Donald Trump Is BS, Says Expert in BS Harry Frankfurt. Harry G. Frankfurt is a professor emeritus of philosophy at Princeton University and the author of On Bullshit. By Harry G Frankfurt / Time

Former President Barack Obama on Friday implored Americans to vote as early as possible and implicitly assailed President Donald Trump for his assault on mail-in voting and the U.S. Postal Service. “Everyone depends on the USPS. Seniors for their Social Security, veterans for their prescriptions, small businesses trying to keep their doors open. They can’t be collateral damage for an administration more concerned with suppressing the vote than suppressing a virus,” Obama tweeted. He went on to urge voters to vote as early as they can. Read more

Stacey Abrams could have as much impact on 2020 as Kamala Harris. By Liette Gidlow / Wash Post

Today, the focus of politics is Sen. Kamala D. Harris (D-Calif.), Joe Biden’s newly selected running mate. But one of the vice-presidential runners-up, Stacey Abrams, may play a significant role in the outcome of the election. Though Abrams did not end up on the Democratic ticket, her work to boost African American voter participation and ensure fair elections in Georgia and across the country has already changed the terrain on which the upcoming presidential election will be fought. Read more

How Kanye West Became a Political Pawn. By Spencer Kornhaber / The Atlantic

The assumption that West will help Trump appears to rest on the idea that Black people will vote for a Black celebrity with his own take on Black political advancement, but thus far West is polling at only 2 percent among Black voters. One survey suggests that Trump, more than Biden, stands to lose votes with West in the race. Read more

Emails and records recently obtained by BuzzFeed News show that federal agents have been monitoring Black Lives Matter protests as well as the social media accounts of possible protesters and activists for “intelligence” on upcoming demonstrations. Of course, something is missing in those documents authored by the Federal Protective Service, a division within the Department of Homeland Security: Mentions of white supremacy. Read more

The Justice Department’s latest accusation that Yale University discriminated against Asian American and white students is an attempt to pit marginalized students against each other, using Asian Americans as the conduit, experts say. Read more

The photo has circulated for years, shared on Twitter feeds and political sites when issues of racism and discrimination dominate the news: Senate Majority Leader Mitch McConnell, much younger than he is now, smiling beside another white man in front of a Confederate battle flag. Read more

The report, one of the most extensive analyses of Black women in corporate America, looks at the topic of pay inequality in the way most companies don’t: at the intersection of racism and sexism. Across the nation, only 7 percent of businesses set representation hiring targets for gender and race combined, and intersectionality is not often top of mind, Sandberg said. The result is persisting barriers to entry for many Black women who find themselves underrepresented, undervalued and, often, disrespected at work. Read more

Related: How the pandemic will affect Black Women’s Equal Pay Day for years to come. By Jewel Wicker / NBC News

The World of Slavery, Kidnapping, and the Slave Trade. By Derek Litvak / AAIHS

One of the enduring ironies of the institution of slavery is that it was wrapped up in the law. While slavery was, for so long, imagined as something centered on the plantation, a variety of new scholarly works have shown just how pivotal the legal arena was to maintaining slavery. It is in this vein that Richard Bell and Jeff Forret offer two compelling narratives of two different sides of the slave trade. Both works, however, are much more than simple courtroom dramas. They both explore the wider world of slavery in America. But it is often the legal conflicts over slavery which acts as an anchor for both scholars, whose stories weave in and around the law. Read more

Julian Bond’s Life in Protest and Politics. By Robert Greene II / The Nation

His time in office, like his time as an activist, would be characterized by both his hopes for greater social equality and the continuing need to fight for such change when these hopes were too often thwarted. This tension was central to nearly all of his writing, much of which is now collected in a new book, Race Man, edited by the historian Michael G. Long. Read more