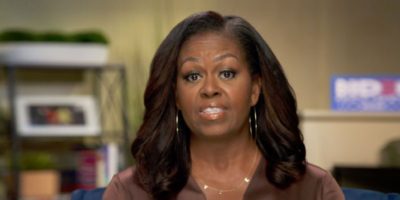 Obama looked like, and embodied, the archetypical voice of a concerned neighbor, speaking from the home. And yet what followed was something unprecedented, the invention of a form: the civilian State of the Union speech. The teleprompter was there, but virtually unnoticeable. “Good evening, everyone. It’s a hard time, and everyone’s feeling it in different ways,” she began. With both her words and her face, Obama painted a dark picture of America today. Detailing the inability of children to attend school, she winced. Our children, she said, “see an entitlement that says only certain people belong here, that greed is good, and winning is everything, because as long as you come out on top, it doesn’t matter what happens to everyone else.” Read more

Why women’s suffrage matters for Black people. By Angela P. Dodson / The Undefeated

While our collective memory of the suffrage movement is often a vision of a small band of white women — fighting the establishment alone, marching and picketing in their flowy white dresses — the story of the women’s movement was more complicated and nuanced than that. It involved many women, but also men, of different races who had to find their voice, identify allies and build coalitions. Read more

Related: How Black women have continued the fight to vote 100 years after suffrage. By P.R. Lockhart / NBC News

Related: Black women in politics are no longer a ‘first.’ They are a force. By Martha S. Jones / Wash Post

2020 Is the Struggle Between Racial Liberalism and Racial Conservatism. By  Thomas B. Edsall / NYT

Not long ago, the struggle between racial liberalism and racial conservatism was a battle fought inside the Democratic and Republican parties. Now it’s a battle fought between the parties. As African-Americans and other racial minorities increasingly occupy positions of influence and authority in American society, they also face backlash from those on the right whose opposition to ceding power is fierce, whether their opposition is veiled or out in the open. This opposition is now lodged solidly in the contemporary Republican Party, and the two parties regularly confront each other with rising intensity over the issue. Read more

For more than 50 years the Republican Party has been working feverishly to ensure that Democratic voters are denied the right to vote, especially African Americans and other minorities. It hasn’t just been Southern white supremacists in deep-red states doing this. Such campaigns have been sanctioned and endorsed by the highest reaches of the Republican establishment. The corruption that lies at the heart of this project has been demonstrated by Republican Departments of Justice and the conservative majority of the U.S. Supreme Court, with essentially no repercussions. Read more

Related: ‘Pitchfork Ben’ and the Jim Crow South got away with the disenfranchisement of voters. Will Trump? By Colbert I. King / Wash Post

The Contours of Atlanta’s Policing Debate. Why most of the city’s Black council members shot down a proposal to defund the police. By George Chidi / The Intercept

“Racism may target Black people, but it damns a democracy and it damns humanity.” By Sean Illing / Vox

Barber released a book in June called We Are Called to Be a Movement. So I contacted him by phone to talk about his broader political theology and why he thinks we need a religious revival in America. I asked him why so many Christians care so little about poverty, why he thinks racism harms poor white people as much as it harms poor Black people, and if he believes economic justice is a precondition for racial justice. Read more

Counties with the highest percentage of White residents have had the lowest rates of coronavirus infections, even as infections have increased with the reopening of some states’ economies, an indication that residential segregation is a significant factor in the pandemic’s spread, a study has concluded. That doesn’t mean White people have more immunity but rather that they have been better able to limit their exposure than have Black people, Latinos and Native Americans, who have been disproportionately infected by the novel coronavirus and killed by covid-19, the disease the virus causes. Read more

What MLK and Malcolm X would do today. By Sean Illing / Vox

A new book by Peniel Joseph, a historian at the University of Texas, is the latest addition to this genre. It’s called The Sword and the Shield, and it’s a dual biography of Malcolm X and Martin Luther King Jr. A lot of books have been written on both of these men, but Joseph’s book is different in that it’s much more about the dynamic between Malcolm and Martin than it is about their individual stories. Read more

Jonathan Smith, a Black mail-processing equipment mechanic who joined the U.S. Postal Service in 1988, remembers his grandfather being so proud of his career at the agency that he wore his uniform even when he wasn’t working. “That job made us part of the middle class,” said Smith, 51, whose aunts and uncles also built careers at the Post Office. For many Black Americans, he said, “The Postal Service is that last symbol of the power of the middle class.” Read more

In the United States, Black babies die at three times the rate of white newborns during their initial hospital stays, according to a peer-reviewed study published Monday in the Proceedings of the National Academy of Sciences. But when Black doctors cared for Black babies, their mortality rate was cut in half. Read more

I was six years old when the bomb was dropped. From more than four miles away at my Grandmother’s house, I could see the thick black cloud in the air. I remember playing outside when a neighborhood kid told me, “They dropped a bomb on MOVE.” When I said, “No they didn’t,” he pointed to the sky to show me billowing smoke. I ran back in the house to find my grandmother, my aunt and other adults watching a raging fire on the television, with a woman screaming uncontrollably. When I said that looked like our home and our family, my aunt said, “It is.” Read more

The Untold Story of the Black Marines Charged With Mutiny at Sea. By John Ismay / NYT

Racial strife aboard a Navy ship left three men facing the threat of the death penalty. They became little more than statistics in the military’s dismal record of race relations in the Vietnam era. “Sun, up down. On the corner, uptown. I turn around and hear the sound. A voice is talking about who’s gonna die next. Cause the white man’s got a God complex.” Though nobody knew it at the moment, that song was about to set off a series of events that would leave three Black Marines facing charges of mutiny and the possibility of execution or lengthy imprisonment.  Read more

When a group of Clemson University students went looking earlier this year for a campus site where dozens of enslaved people were buried, they found an unmarked and unkempt plot of land. A fence meant to protect the gravesite had fallen down in places. Distraught, the students alerted a professor. Six months later, Clemson says it has found more than 200 unmarked graves there — many belonging to enslaved people owned by John C. Calhoun, the nation’s seventh vice president, whose plantation later became the school’s campus. Read more

“Lovecraft Country” star: “It’s a shame that men and women are being accosted and lynched” today. By D. Watkins / Salon

Produced by Jordan Peele and Misha Green and based on Matt Ruff’s novel, “Lovecraft Country” follows an unlikely group of Chicagoans, as they road trip across 1950s Jim Crow America in search of a relative. The journey starts off as normal, but quickly becomes terrifying as racist monsters and then actual monsters derail the travelers. Courtney B. Vance appeared on “Salon Talks” to discuss making HBO’s 1950s-set horror series & racial injustices. Read more

Toots Hibbert is one of the pioneers of reggae — and wrote many of its classic hits. After a devastating injury, the man they call Fireball is back to reclaim his throne. It took two years of phone calls and confusing negotiations to get myself invited to visit Toots Hibbert at his fortress-like pink stucco compound in the Red Hills section of Kingston, Jamaica. When I finally arrived, he wasn’t home. No one around seemed to know the whereabouts of the world’s greatest living reggae singer.    Read more

Baseball is honoring the Negro Leagues. It needs to explain why they existed. By Kevin B. Blackstone / Wash Post

The ‘gentlemen’s agreement’ of 1887 between white professional baseball teams excluded all black players from participation, leading to the eventual creation of the Negro Leagues,” Stephen Segal wrote in the journal the Historian in 2012. “Rather than continuing racial progress after 1869, blacks went backwards in terms of equality in organized baseball. The story of the Pythian Club exemplifies yet another example of how African-American dreams of equality were shattered and unfulfilled during the period of Reconstruction and afterwards in both the South and North.” Read more