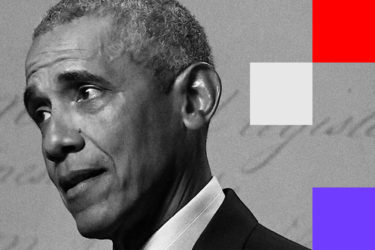 On Wednesday, Aug. 19, 2020, standing in front of an exhibition about the Constitution in Philadelphia, Barack Obama fully became an American Jeremiah.  The former president told us that “our democracy” — the American experiment — is on the line in this election, that the Trump presidency has so soiled and corrupted the promise, sent it to the brink of self-destruction, that we have only 70-plus days to save it. Mr. Obama knows that the jeremiad is not a mere lamentation, but a cry for hope. He delivered both. Read more

Related: Voting Is Broken. It’s the Only Way Out. The Obamas’ joint message at the DNC this week felt terrifying because it genuinely is. By Dahlia Lithwick / Slate

Related: A second Trump term might injure the democratic experiment beyond recovery. The Editorial Board / Wash Post

Anatomy of a Photograph: Authoritarianism in America. By Errol Morris / The Atlantic

The pictures of the president and his advisers walking to St. John’s Church have become famous, even iconic. (Perhaps an iconic picture of white supremacism? It’s not just that the photographs feature only white men and women. Why is the chairman of the Joint Chiefs of Staff wearing combat fatigues? Why is he there at all? What is Barr, the attorney general, doing there? Read more

At The DNC, Democrats Embraced The Civil Rights Movement To Explain Their Place In The Present. By Paul Blumenthal / HuffPost

Today, the Democratic Party tells a different story of its place in American history. Speaker after speaker at the 2020 Democratic National Convention reached to the more recent, but increasingly distant history of the civil rights movement to explain its purpose in the 21st century. Democratic nominee Joe Biden opened his acceptance speech Thursday night with a quote from civil rights icon Ella Baker, and other leaders like Martin Luther King, Jr., C.T. Vivian, Fannie Lou Hamer, Diane Nash and the late Georgia congressman John Lewis were invoked during the week too. Read more

Related: DNC: On racial equality, Joe Biden made the problem clear. Is he ready to do the work? By Kristen Clarke / USA Today

How to Dismantle White Supremacy. By Barbara Smith / The Nation

To end systemic racism, the country needs a comprehensive racial justice program even more sweeping than the Marshall Plan. The reason these horrors continue century after century is that the system of racial domination that disadvantages people of color and privileges whites has not been broken. The ruling class dismisses the subjugation, exploitation, and violence because of the unrestricted power and disproportionate wealth that they gain as a result. Read more

If people were given the choice between democracy and whiteness, how many would choose whiteness?” Taylor Branch, the Pulitzer Prize-winning historian of the Civil Rights Movement, drops that question like a bomb on Page 352 of “Caste,” the new book by Isabel Wilkerson, herself also a winner of Joseph Pulitzer’s prestigious prize. There are many moments in “Caste” that bring you up short in the starkness of their truth. But none hits quite as hard as that one, nor cuts quite as close to the bone of American fears. Read more

Cornel West: Is America ‘even capable of treating the masses of Black people with decency and dignity’? By KK Ottesen / Wash Post

There’s been a real outpouring from people around the country and around the world in response to the death of George Floyd and others recently. Do you think this could actually be a turning point? Well, I hope so. You never know which catalyst is the crucial one that can sustain the movement. The Rosa Parks moment. The Emmett Till moment. But there’s good evidence that this could be a real pivotal moment in which people seriously wrestle with this legacy of white supremacy and other forms of injustice. Read more

Related: The awakening of the American white mind. By Randall Horton / Salon

Related: Black and White evangelicals once talked about ‘racial reconciliation.’ Then Trump came along. By Sarah Pulliam Bailey / Wash Post

What is implicit bias? The invisible racism that hurts Black women at the doctor’s office. By Vidya Rao / Today

“Many of the women I interviewed would have that inkling that they weren’t getting the same care as their white counterparts, but there really is no way to know for sure, because you are only one person and you don’t really have a control group,” Sacks said. “And part of the challenge of that experience is the anxiety about whether or not it is true. ‘Can I trust my own perceptions? And what can I do about it?’” Read more

Hours after the thick smoke of President Trump’s fireworks show dissipates from the Mall, a crowd of thousands is expected to march Friday to the Lincoln Memorial for a civil rights protest calling on the nation to fulfill unkept promises of racial justice and equality. The march — on the 57th anniversary of Martin Luther King Jr.’s seminal “I Have a Dream” speech — will conclude a week of large-scale events in the nation’s capital, including protests, a fireworks display marking the end of the Republican National Convention and Trump’s acceptance speech, which he is expected to give from the South Lawn of the White House. Read more

When Raphael W. Bostic, the first Black president to lead one of the Federal Reserve’s regional banks, published a searing essay during this summer’s Black Lives Matter protests calling for an end to systemic racism, he spurred an urgent discussion around the century-old institution about how to build an economy that includes all Americans. Read more

Last week, concluding a two-year investigation into the university’s admissions process, the Justice Department accused Yale of discriminating against white and Asian American applicants in order to manipulate the demographics of its student body. It was the Trump administration’s latest assault on affirmative action and another step on the path first started by conservative activists toward an eventual Supreme Court case over the issue.  Read more

Republican lawmakers and a Republican governor have green-lit a new law in Tennessee that makes it possible for people to have their voting rights revoked as punishment for participating in protests. Under the new law, demonstrators who camp on state property—as scores have been doing in front of the state’s Capitol building since George Floyd’s killing earlier this year—can now be charged with a Class D felony, up from the misdemeanor it was previously. Read more

After the Civil War, much of the South needed to be rebuilt. One of the places that helped do that was the Chattahoochee Brick Company, owned by an Atlanta mayor and captain in the Confederate Army. It produced millions of bricks that were used in Atlanta homes and roads. The factory is gone, but there is new focus on the people who lived and worked there, unpaid, and in horrible conditions. Read more

The new Air Force chief wasn’t sure how to address George Floyd’s killing. Then he talked to his son. By Dan Lamothe / Wash Post

But then his son asked, “ ‘Dad, what is Pacaf saying?’ ” Brown recalled. “Which is code for, ‘Dad, what are you going to say?’ ” Over the next day or two, Brown wrote a script about his experiences and recorded it in front of a dark backdrop. He recalled being the only African American in his squadron, the only African American in meetings of senior leaders, and having a colleague question whether he was a pilot. Read more

As the only Black GOP senator, he has walked a delicate line between schooling his colleagues — and the president — on matters of race and remaining silent. Has that helped his political future? In response to protests that have sprung up across the country in the wake of Black deaths at the hands of police officers, Trump has taken the opportunity to defend memorials to Confederate generals, call a Black Lives Matter street painting a “symbol of hate” and repeal a housing desegregation rule that he said was “having a devastating impact” on “once thriving Suburban areas.” Scott may not agree with these impulses, but his detractors will say that his continued support of Trump speaks at least as loud as his criticisms. Read more

The Black Freedom Struggle of the North. By Josua Clark Davis / AAIHS

Many Americans misunderstand the Southern civil rights movement. When it comes to the history of the Northern movement for racial equality, we encounter a different problem—not widespread misinterpretation, but rather profound ignorance of centuries of racial exclusion and discrimination that has thrived in the United States outside the South, as well as the many movements that struggled against such discrimination beyond the eleven states of the former Confederacy. Read more

A Black Louisiana man will spend the rest of his life in prison for stealing hedge clippers, after the Louisiana Supreme Court denied his request to have his sentence overturned last week. Fair Wayne Bryant, 62, was convicted in 1997 on one count of attempted simple burglary. In his appeal to the Second Circuit Court of Louisiana in 2018, his attorney, Peggy Sullivan, wrote that Bryant “contends that his life sentence is unconstitutionally harsh and excessive.” Read more

Instead of holding the boxscore of the Los Angeles Lakers’ Game 2 win over the Portland Trail Blazers, LeBron James held something more important in his hands. He clutched a copy of The Autobiography of Malcolm X, a book on the civil rights icon that James said he “started a couple of days ago.” James was photographed reading the book while working out in between Games 1 and 2, and the Lakers star has become captivated about the life of a person he considered “a very, very smart man” and “a very powerful-minded gentleman.” Read more

Here’s What Critics Are Saying About Tenet. By Marissa Martinelli / Slate

After several COVID-related delays, Christopher Nolan’s mysterious new movie Tenet will finally receive a theatrical release in the U.K. this week, with a safe and hopefully non-life-threatening U.S. release shortly to follow. The first reviews are in, and they promise the same dazzling visuals and dizzying plot that we’ve come to expect from the writer-director—for better and for worse. Robert Pattinson, Elizabeth Debicki, and Kenneth Branagh co-star in the sci-fi action blockbuster, which follows John David Washington as a man tasked with preventing World War III as the result of time manipulation, or something. Read more

“A Change Is Gonna Come” Has a Long History in Politics. By Dan Adler / Vanity Fair

Sam Cooke’s 1964 song was sung at Barack Obama’s inauguration and in Spike Lee’s Malcolm X, and had its origins alongside Selma’s infamous “Bloody Sunday. On the third night of the Democratic National Convention on Wednesday, Jennifer Hudson made the reference explicit in a performance that closed the proceedings.” Read more