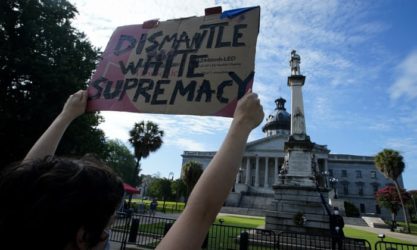 Featured – Removing monuments is the easy part. We must make America a real democracy. By Rev William Barber and Rev Bernice King / The Guardian

While the divisive politics of Trumpism may be the last gasp of the Southern Strategy, the question of whether America can do the work of becoming a genuine democracy still remains. Removing monuments to the lie of white supremacy is an important step, but a shared future depends on redistributing power and resources so that every American, no matter their race, income, geography or immigration status, has access to healthcare, public education, affordable housing, a living wage, clean water and a livable planet. Read more

Related: America is on a brink like none since the Civil War. By Peniel E. Joseph / CNN

Together, You Can Redeem the Soul of Our Nation. By John Lewis / NYT

While my time here has now come to an end, I want you to know that in the last days and hours of my life you inspired me. You filled me with hope about the next chapter of the great American story when you used your power to make a difference in our society. Millions of people motivated simply by human compassion laid down the burdens of division. Around the country and the world you set aside race, class, age, language and nationality to demand respect for human dignity. Read more

Related: John Lewis’s funeral was a balm to the soul of America. By Kathleen Parker / Wash Post

Related: From MLK to John Lewis, Ebenezer Baptist Church has been a haven for civil rights. By Jewel Wicker / NBC News

A Half-Century After Wallace, Trump Echoes the Politics of Division. By Peter Baker / NYT

George Wallace’s speeches and interviews from his 1968 campaign feature language and appeals that sound familiar again as the “law and order” president sends federal forces into the streets. Read more

Related: Trump’s pick to manage public lands has four-decade history of overt racism” toward Native people. By Alleen Bown / The Intercept

In mid-July, former New York City Mayor Rudy Giuliani took to his podcast, Common Sense, to warn listeners that Black Lives Matter would abolish “a government based on free enterprise” as well as “really, your right to have a religion.” If the “Marxist” activists took power, he said, they would use reparations to “get, like, a lifetime salary.” That same day, Glenn Beck spent an hour laying out BLM’s “Plot to DESTROY the Family.” Tucker Carlson was even more direct: The protesters “want segregation,” he said. “You cool with that?” Read more

Related: A White filmmaker held up a Black Lives Matter sign in Harrison, Arkansas, and here’s what happened. By Alisha Ebrahimji / CNN

Why the Black Lives Matter movement should claim the 14th Amendment. By Brando Simeo Starkey / The Undefeated

The movement, though, must reach for a more ambitious objective: control of the Constitution. Black lives matter not just on moral grounds. The 14th Amendment provides that, “No state shall … deny to any person within its jurisdiction the equal protection of the laws.” Black lives matter because our Constitution — because the equal protection clause — demands it. Read more

San Francisco Mayor London Breed plans to divert $120 million from law enforcement to efforts that address inequities faced by the city’s Black community in housing, health, economic opportunity and education. The proposal comes two months after, as Breed put it during Friday’s announcement, “the murder of George Floyd shook this country to its core, in a way that I have never seen before,” stoking ongoing protest against police brutality and racial injustice. Read more

Is former New Orleans Mayor Mitch Landrieu a leader for this moment of racial reckoning? By Janell Ross / NBC News

Mitch Landrieu catapulted from progressive philanthropy darling to household name when he ordered the removal of four Confederate monuments in New Orleans while serving as mayor in 2017. Now, he’s organizing public conversations about race and opportunity while creating a program to help produce elected officials willing to prod their communities toward equity. Read more

The lies our textbooks told my generation of Virginians about slavery. By Bennett Minton / Wash Post

A series of textbooks written for the fourth, seventh and 11th grades taught a generation of Virginians our state’s history. Chapter 29 of the seventh-grade edition, titled “How the Negroes Lived Under Slavery,” included these sentences: “A feeling of strong affection existed between masters and slaves in a majority of Virginia homes.” The masters “knew the best way to control their slaves was to win their confidence and affection.” Enslaved people “went visiting at night and sometimes owned guns and other weapons.” Read more

The coronavirus pandemic has highlighted America’s enduring racial disparities, which are fuelled by decades of unequal treatment, unequal opportunity, and structural barriers like job discrimination and poor schools. Blacks have been infected with covid-19 at three times the rate of whites, and their death rate is twice that of whites. (The same is true for Hispanics.) Read more

The death of Herman Cain, attributed to the coronavirus, has made Republicans and President Trump face the reality of the pandemic as it hit closer to home than ever before, claiming a prominent conservative ally whose frequently dismissive attitude about taking the threat seriously reflected the hands-off inconsistency of party leaders. Read more

Black youth detained in juvenile justice facilities have been released at a far slower rate than their white peers in response to the coronavirus, according to a new report that also found that the gap in release rates between the two groups had nearly doubled over the course of the pandemic. The report, released this month by the Annie E. Casey Foundation, illustrates one more disparity the coronavirus has exacerbated for Black children, who are disproportionately funneled into the juvenile justice system. Read more

No one is raising Baldwin from the dead, but we now have maybe the next best thing: a book about Baldwin from Princeton African American studies professor Eddie Glaude Jr. It’s called Being Again: James Baldwin’s America and Its Urgent Lessons for Our Own.  I reached out to Glaude to talk about Baldwin’s conception of America and how it can speak to this moment. This is a long and honest discussion about the contradictions of the American project and why racial progress is both real and illusory at the same time. It is also, I hope, a clarifying exchange on the moral dilemmas at the heart of this challenge. Read more

MLB Commemorates The 100th Anniversary Of The Negro Leagues. By Doug Tribou / NPR

As protests over racial injustice in the U.S. continue, Major League Baseball is honoring an institution created 100 years ago because of its own racist past. The Negro Leagues showcased Black baseball players when they were banned from the big leagues. Read more