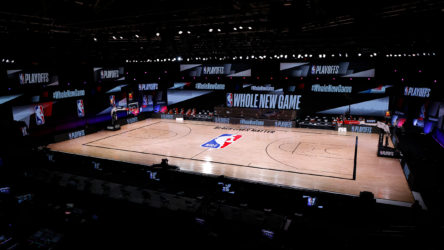 Featured – The NBA Wildcat Strike Is How a Revolution Starts. By Lester Spence / Mother Jones

The NBA wildcat strike suggests the possibility of a radically different relationship between the Black agenda and the makers of Black culture. We can’t quite draw a straight line between Black Lives Matter protesters and Kendrick Lamar and Beyoncé and Ryan Coogler and then LeBron James and Naomi Osaka. But Black popular culture and Black popular culture producers have played a powerful role in reorienting Black identities toward working-class populations, generating more sophisticated accounts of what racial justice looks like, and then articulating critiques of existing institutions in ways that generate meaningful political change. Read more

Related: N.B.A. Protest Shows Who Calls the Shots in a Superstar Economy. By Noam Scheiber / NYT

Thousands of demonstrators braved sweltering temperatures in the nation’s capital on Friday to demand an overhaul of the country’s criminal justice system and push for racial equality. The event, called the Commitment March, was held at the Lincoln Memorial, the same site where the Rev. Martin Luther King Jr. called for those same reforms decades ago in his iconic “I Have a Dream” speech. Read more

What the Kenosha shooter tells us about Donald Trump’s America. By Chauncey DeVega / Salon

Rittenhouse’s apparent shooting spree in Kenosha exemplifies the way that Donald Trump has served as a type of permission function for the darkest forces in American society by continually encouraging violent and other anti-social behavior by his followers. It would seem that Kyle Rittenhouse was listening closely. Read more

Related: Kenosha Tells Us More About Where the Right Is Headed Than the R.N.C. Did. By Jamelle Bouie / NYT

Related: A Tale of Two Teens: When White Killers Are Treated Better Than Black Victims. By Hana Kiros / The Progressive

Related: White Vigilantes Have Always Had A Friend In Police. By Christopher Mathias / Huff Post

The Thin Blue Line Between Violent, Pro-Trump Militias and Police. By Ryan Devereaux / The Intercept

“As we’re approaching the election and Trump is hyping fear over the protests and ginning these people on with all this of law order stuff, it’s going to get worse,” Beirich told The Intercept. “I don’t expect this, unfortunately, to be the end of it.” Read more

US Law Enforcement’s Warrior Complex Is on Full Display in the Streets—and in Leaked Documents. By Chris Gelardi / The Nation

In memos, intelligence reports, and other interdepartmental communications from the days following the police killing of George Floyd, domestic law enforcement agencies, especially those on the federal level, put on display their zeal for War on Terror–style counterinsurgency. Read more

So while study after study has demonstrated the impact of police surveillance and violence on adult physical and mental health, children are also affected as victims and as witnesses. And unlike adults, children are at vulnerable times in their development when such exposures may have long-lasting effects. Calls to reform or abolish the police must be understood within this broader context — because the people directly and indirectly impacted by the harms of policing are not only the men and women we have painfully witnessed suffer in video after video, but also our children and teens. Read more

The Massacre That Emboldened White Supremacists. By William Briggs and Jon Krakauer / NYT

The 1873 murders of dozens of former slaves in a flyspeck Louisiana town still reverberate. A straight line can be drawn from Colfax and Cruikshank to the race riots in East St. Louis in 1917 and in Omaha, Chicago and other cities two years later; to the abhorrent crimes committed in the 1921 Tulsa race massacre; to the criminal brutality unleashed on African-Americans in Selma and Birmingham, Ala., in the 1960s; to the present-day instances of police and white nationalist violence in Ferguson, Mo., Charlottesville, Va., and now Kenosha, Wis. Read more

We have been feted to a parade of Black and brown faces that have sought to soften or even erase Trump’s overt history of racism to falsify an American story into one in which liberals are worse racial offenders than conservatives. In this inside-out world, Trump has been an exemplar on racial inclusion and his defeat would usher in an era of racial division. Read more

Related: The Republican convention is paving a path for White voters to again choose Trump. By Jonathan Capehart / Wash Post

Related: We Need to Talk About the GOP’s ‘Black Friends.’  By Elie Mystal / The Nation

Related: A police captain’s widow used his story to back Trump at the GOP convention. His daughters say it was ‘despicable.’ By Caroline Kitchener / The Lilly

His testimony during the Watergate scandal helped bring down Nixon. His new book is “Authoritarian Nightmare: Trump and His Followers.” “I worked for the last authoritarian president we had,” Dean says. “Trump is of a different cut than Nixon. … He’s going to make Nixon look like a choir boy before it’s all over.” Read more

Presidents have a long history of condescension, indifference and outright racism towards Black Americans. By Stephen A. Jones and Eric Freedman / The Conversation

The fury over racial injustice that erupted in the wake of George Floyd’s killing has forced Americans to confront their history. An honest assessment of American presidential leadership on race reveals a handful of courageous actions but an abundance of racist behavior, even by those remembered as equal rights supporters. Read more

Race Is Critical to the Field of International Relations. By Kelebogile Zvobgo and Meredith Loken / Foreign Policy

A Detailed Look at the Downside of California’s Ban on Affirmative Action. By Kevin Carey / NYT

This November, with an initiative to repeal Proposition 209 on the ballot, California voters will have the opportunity to change their minds. And a comprehensive study released Friday finds that by nearly every measure, the ban has harmed Black and Hispanic students, decreasing their number in the University of California system while reducing their odds of finishing college, going to graduate school and earning a high salary. At the same time, the policy didn’t appear to greatly benefit the white and Asian-American students who took their place. Read more

Haley, the former governor of South Carolina and U.S. ambassador to the United Nations, was born Nimrata Randhawa to Indian immigrants from Punjab and goes by the childhood nickname “Nikki.” She’s private about her Sikh background and emphasizes her conversion to Christianity. She even listed her race as “white” on a 2001 voter registration card. Read more

Black men in D.C. are expected to die 17 years earlier than White men. Here’s why. By Lola Fadulu / Wash Post

Jon Meacham on John Lewis, the Legend and the Man. By Eric Foner / NYT

Jon Meacham, the best-selling author of a number of biographies as well as “The Soul of America,” a celebration of American democratic values, opens “His Truth Is Marching On” in a hagiographic vein. The first chapter argues that Lewis can reasonably be regarded as a saint “in the classical Christian sense of the term” — one who lived his life in accordance with the precepts of love and forgiveness embodied in Christ’s words on the Cross (the subject of Meacham’s previous book). Read more

The Trump administration’s sudden decision to end 2020 census field operations a month early will disproportionately hurt communities of color and leave them with less federal money and weaker representation in Congress for the next 10 years. That is President Donald Trump’s intended effect, of course, says Oregon Gov. Kate Brown. Read more

The expanded City First Bank, which concentrates on underserved neighborhoods, will be the nation’s largest Black-controlled federally insured commercial lender. A merger announced Wednesday will create the nation’s largest Black-controlled bank and the first with assets of more than $1 billion. Broadway Federal Bank, a Los Angeles-based commercial lender founded in 1946, will combine with City First Bank in Washington, which opened in 1998. Read more

T’Challa forever: We lost Chadwick Boseman but not the symbolism of what he represents. By Melanie McFarland / Salon

Symbols tend to be marked with coincidences that add to their legend. Then again, this could be one of those mysterious happenstances that fades into interesting trivia further down the road. What matters in the aching now of this loss is the consideration of what Boseman himself represented not only in becoming T’Challa but by way of the other roles he’s played, including a young Thurgood Marshall in 2017’s “Marshall” or even his messianic Vietnam War squad commander Stormin’ Norman in Spike Lee’s “Da 5 Bloods” from earlier this year. In all of these parts Boseman radiates a gentle, firm, principled righteousness. Many successful actors are blessed with a hero’s mug, but Boseman is one of a very few who naturally exudes goodness and strength, who embodies proud Black resilience. All of this echoes in his wake. Read more

To mark what would have been Michael Jackson’s 62nd birthday, director Spike Lee has released a 2020 version of his music video for the singer’s “They Don’t Care About Us.” The new visual for “They Don’t Care About Us (2020)” incorporates scenes and outtakes from Lee’s original two videos for the HIStory: Past, Present and Future, Book I single — both the Brazil version and the prison-set one that examined police brutality — with footage from George Floyd protests from around the world. Watch here