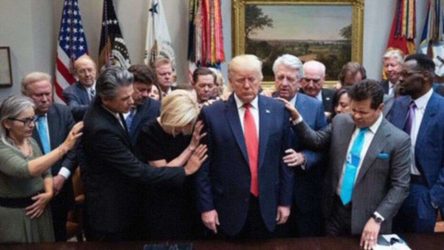 Robert P. Jones, chief executive and founder of the Public Religion Research Institute (PRRI), is fast becoming the leading expert in the values, votes and mind-set of White Christians. His latest book, “White Too Long: The Legacy of White Supremacy in American Christianity,” is a masterful study documenting how white supremacy came to dominate not just Southern culture, but White Christianity. In it, he argues that “most white Christian churches have protected white supremacy by dressing it in theological garb, giving it a home in a respected institution, and calibrating it to local cultural sensibilities.” Below is my conversation with Robert P. Jones, edited for style and length. Read more

Related: The long history of how Jesus came to resemble a white European.  By Anna Swatwood House / The Conversation

The complex history and an uncertain future of American whiteness. By Nell Irvin Painter / NBC News

A summer of protest has launched myriad conversations on Blackness in America. But whiteness also has its own history in the U.S., one that Nell Painter, author of “The History of White People,” says deserves just as much scrutiny. Watch here

Related: Why ‘White’ should be capitalized, too. By Nell Irvin Painter / Wash Post

Related: Let’s Stop Using “White” And “Black” To Describe European-Americans And African-Americans : Here Are The Reasons Why. By Ronald J. Sheehy / Race Inquiry

Trump’s History of Racism and the Reckoning It Has Forced. By Ibram X. Kendi / The Atlantic

It has become harder, in the Trump years, to blame Black people for racial inequity and injustice. It has also become harder to tell Black people that the fault lies with them, and to urge them to improve their station by behaving in an upstanding or respectable manner. In the Trump years, the problem is obvious, and it isn’t Black people’s behavior. The U.S. has often been called a land of contradictions. It has been a massacring nation that said it cherished life, a slaveholding nation that claimed it valued liberty, a hierarchal nation that declared it valued equality, a disenfranchising nation that branded itself a democracy, a segregated nation that styled itself separate but equal, an excluding nation that boasted of opportunity for all. A nation is what it does, not what it originally claimed it would be. Read more

#RECKONING, a video project from TIME, examines the cultural response to three viral videos. The footage reveals some of the many forms of racism that are part of daily life in America. The impact of these videos—along with several other clips showing racial discrimination, police brutality and violence—has helped give rise to one of the largest civil rights movements in recent history. Watch here

How Has the Electoral College Survived for This Long? Resistance to eliminating it has long been connected to the idea of white supremacy. By Alexander Keyssar / NYT

As our revived national conversation on race has made clear, the legacies of slavery and white supremacy run wide and deep in American society and political life. One such legacy — which is particularly noteworthy in a presidential election season — has been the survival and preservation of the Electoral College, an institution that has been under fire for more than 200 years. Read more

Related: Trump Can Lean on the Electoral College to Win in 2020. By Jamelle Bouie / NYT

Black Lives Matter in Small Towns, Too. By Amanda Solliday / The Progressive

In Taylorville, a mostly white town in Illinois, a BLM protest highlights how the movement is making an impact in unlikely locations. The Taylorville protest was so large, and in such a seemingly unlikely location, that footage of the march was featured on CNN as evidence that the Black Lives Matter movement was reaching new corners of America. Read more

Enslaved people’s health was ignored from the country’s beginning, laying the groundwork for today’s health disparities. By Eric Kyere / The Conversation

Some critics of Black Lives Matter say the movement itself is racist. Their frequent counterargument: All lives matter. Lost in that view, however, is a historical perspective. Look back to the late 18th century, to the very beginnings of the U.S., and you will see Black lives in this country did not seem to matter at all. Foremost among the unrelenting cruelties heaped upon enslaved people was the lack of health care for them. Read more

Related: U.S. lacks plan for getting vaccine to communities of color devastated by virus. By Rachel Roubein and Sarah Owermohle / Politico

The American dream while Black: Locked in a vicious cycle. Homeownership is supposed to be the gateway to the American dream. Black Americans have been denied access. By Nigel Chiwaya and Janell Ross / NBC News

Advocates, scholars and officials say one of the clearest examples of ongoing discrimination exists in the housing market, where the gap in homeownership rates between Black and white Americans is wider than it was before the Civil Rights movement. Seventy-six percent of white households owned their homes at the end of the second quarter of 2020, compared to just 47 percent of Black households, according to the Census Bureau. That 29-percentage-point gap, perpetuated by decades of housing and economic policies favorable toward white buyers and designed to exclude Black buyers, has only been exacerbated by the pandemic and before it the 2008 financial crisis. Homeownership is the prime driver of America’s ongoing wealth gap. Read more

Black-owned companies are shutting down twice as fast as other businesses. By Chauncey Alcorn / CNN

The New York Fed on Wednesday unveiled a study on the virus’ impact on business owners nationwide. The report estimates that 41% of Black-owned businesses across the country shut down between February and April, echoing the findings of a similar University of California, Santa Cruz study released in June. About 32% of Latino businesses and 26% of Asian businesses shut down over the same time span. Only about 17% of white businesses shut down during the same period, the study authors found. The authors cite lack of financial savings, less access to capital, including federal PPP loans, and funding gaps that existed prior to the pandemic as causes for the demographic disparities. Read more

Related: How the D.C. region will be strengthened by focusing on a more equitable future. By Derrick L. Davis / Wash Post

Former national security adviser Susan Rice told NPR she’s “honored and humbled” to be on Joe Biden’s shortlist for vice president and that her lengthy tenure in the executive branch would make her an effective No. 2. “I think I could bring my experience of almost now 20 years in the senior levels of the executive branch to bear to help tackle the most pressing problems we face,” she told Morning Edition’s Steve Inskeep in an interview that aired Tuesday. Read more

If corporations want to stop racism, here’s where they can start. By John W. Rogers Jr. and Charles A. Tribbett / Wash Post

In the wake of the brutal killing of George Floyd, we find ourselves flooded with calls from White leaders seeking advice. These friends and colleagues want to know how they can help repair the flagrant racial injustice that defies our nation’s stated values. We tell them to start in their own organizations. We believe we can solve for diversity with actionable solutions. To hold institutions accountable for their commitment to inclusion at every level, we propose attention to the three P’s: people, purchasing and philanthropy. Read more

Distrust of the Minneapolis Police, and Also the Effort to Defund Them. By John Eligon / NYT

‘Life of a Klansman’ Tells Ugly Truths About America, Past and Present. By Walter Isaacson / NYT

In his new book, “Life of a Klansman,” Edward Ball takes the reader along with him on a journey of discovery as he teases out facts, engages in speculation and shares his emotions about the sad saga of Constant Lecorgne, an unsuccessful carpenter and embittered racist who was a great-great-grandfather on his mother’s side. Read more

Returning From War, Returning to Racism. By Alexis Clark / NYT

After fighting overseas, Black soldiers faced violence and segregation at home. Many, like Lewis W. Matthews, 93, were forced to take menial jobs. Although he managed to push through racism, that wasn’t an option for many. “At the heart of it was a kind of nervousness and fear that many whites had that returning Black veterans would upset the racial status quo,” said Charissa Threat, a history professor at Chapman University, who has written extensively on civilian-military relationships and race. “They saw images of Black soldiers coming from abroad from places like Germany and England, where Black soldiers were intermingling with whites and had a lot more freedom.”  Read more

Clinton’s attack was more subtle than savage. But it was still severe. “There were two or three years there where the movement went a little too far toward Stokely,” he said, “but in the end, John Lewis prevailed.” For Clinton, the movement’s problematic drift was its turn toward Black Power. Black Power was an approach to change rooted in Black political independence, economic empowerment and cultural pride that gained popularity during the late 1960s. Read more

In the latest issue of The New Yorker, the artist Grace Lynne Haynes, in her début for the magazine, paints a portrait of Sojourner Truth. The image arrives on the hundredth anniversary of the ratification of the Nineteenth Amendment, which gave women the vote. Truth, who died in 1883, didn’t live to see that victory, but she spent her life fighting for women, for abolition, and for Black women, specifically, at a time when many suffragists refused to acknowledge them in the movement. Read more

While Alex Caruso takes pride in wearing the popular Los Angeles Lakers name across his chest, it’s the words on the back of his jersey that he wants to talk about. Caruso, who is white, has chosen to wear “Black Lives Matter” on his jersey in Orlando, Florida, to support the fight for racial equality. “This is something that Black people can’t do on their own,” Caruso told The Undefeated. “This isn’t something where they can wake up and say, ‘You know what? I’m just grinding, being an activist and talking to so many people and it’s going to get done.’ … Read more