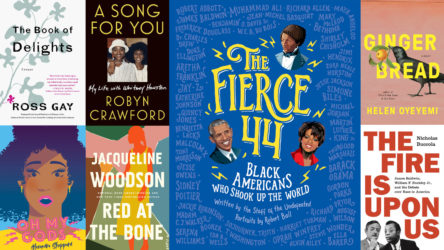 Featured – Our 25 can’t-miss books of 2019. The books you’ve just got to give for the holidays. By Soraya Nadia McDonald / The Undefeated

Behold! It’s The Undefeated’s second annual list of books you’ve just got to read — right in time for holiday shopping season. With only 25 slots, we try to cultivate a mix of adult fiction, nonfiction, children’s and young adult options. And of course we’ve got you covered on all things sports. Happy reading! Read more

Remembering the Poor on Christmas. By Charles M. Blow / NYT

Poverty has declined in the U.S., but it has by no means disappeared. According to the Census Bureau, in 2018 there were 38.1 million people living in poverty, including 11.9 million kids under the age of 18. And in this is a distinct and disturbing racial disparity: 20.8 percent of black people live in poverty, compared to 8.1 percent of non-Hispanic whites, 10.1 percent of Asians and 17.6 percent of Hispanics. Read more

Homelessness is Los Angele’s defining crisis. Income inequality, a shortage of housing, failing mental health services and drug addition all contribute to growing scenes of squalor across America’s second-largest city. Yet it does not affect everyone equally. The historic displacement and fracturing of black communities in South Los Angeles have pushed black Angelenos onto the streets at more than eight times the rate of other groups. Read more

There’s usually one film that tops lists whenever powerful legal thrillers are debated — “To Kill a Mockingbird,” set in the 1930s. Now comes a film showing how little has changed since then, based on a murder in the same Alabama town where Harper Lee wrote her masterpiece. “ Just Mercy ” is the real story of civil rights attorney Bryan Stevenson and his fight to keep an innocent black man from being executed. It is urgent, searing and powerful, led by a first-rate cast. Though it portrays events more than 25 years ago, it is very much a film of 2019. Schedule release on December 25.  Read more Also see, Official trailer here

Impeachment won’t slow the global rise of the radical right — but an alternative vision might. By Chauncey DeVega / Salon

Cas Mudde is one of the world’s leading experts on right-wing extremism, populism, democracy and the global new right. Mudde is the Stanley Wade Shelton UGAF Professor in the School of Public and International Affairs at the University of Georgia and a contributing writer for the Guardian. In our conversation, Mudde discussed how Donald Trump’s authoritarian populist movement is similar to (and different from) related movements led by British Prime Minister Boris Johnson, Brazilian President Jair Bolsonaro, Turkish President Recep Tayyip Erdogan and other such leaders around the world. Read more

The Tyranny of the 63 Million. Impeachment didn’t undermine democracy. It vindicated it. By Michelle Goldberg / NYT

Women and people of color, of course, were originally outside the protection of those founding documents. But on Wednesday, the most diverse Congress in history declared that even the most powerful white man in the world should be bound by them. When Republicans act as if that’s a sacrilege, they show us what they worship. Read more

Twenty-five Jewish Democratic members of Congress are calling on President Donald Trump to remove senior White House adviser Stephen Miller from the administration based on leaked emails that showed he promoted stories from white nationalist and fringe media organizations. The lawmakers are the latest to call for Miller to be fired after hundreds of the Trump adviser’s emails during the lead-up to the 2016 election were leaked by a former white nationalist who was working for Breitbart News at the time. Read more

Justin Clark, one of President Donald Trump’s top reelection aides, was caught on tape telling powerful Republicans in Wisconsin that though the Republican party has “traditionally” used voter suppression tactics to win in swing states, this year, the party will go on the offensive due to relaxed Election Day rules. Read more

When Native Americans Are Told To ‘Go Back’ To Where They Came From. By Christopher Mathias / HuffPost

Native Americans reported being told different variations of the phrase: “Go back to your country,” “go back to Mexico,” “go home,” “get out of our country,” and “go back to the reservation.” For a white person — and it’s almost always a white person — to say “go back” to a Native American, whose ancestors were here long before European settlers colonized this continent, betrays the real, white supremacist meaning of the phrase: We don’t want you anywhere at all. President Donald Trump speaks at the White House in front of a portrait of former President Andrew Jackson, who started a campaign of ethnic cleansing targeting Native Americans.   Read more

Five professors say the 1619 Project should be amended. ‘We disagree,’ says the New York Times. By Katie Mettler / Wash Post

Five historians recently wrote to the New York Times Magazine, asking the architects of its comprehensive 1619 Project, which tells the founding narrative of America through the lens of slavery, to issue several corrections. They argued that assertions in the 1619 package about the motivations that sparked the Revolutionary War and President Abraham Lincoln’s views on black equality were misleading. Read more

Why Are the Democratic Candidates Talking Past Latinx Voters? By Fernanda Echavarri / Mother Jones

Latinos were mentioned just once in November’s debate. It hasn’t gone unnoticed. A record 32 million people who identify as Hispanic will be eligible to vote in the next elections, according the Pew Research Center. That’s about 13 percent of the electorate, making it the largest non-white voting group in the United States, just slightly surpassing the number of eligible Black voters. Read more

This weekend, one of the most high-profile Latinas in Congress, Rep. Alexandria Ocasio-Cortez, is campaigning for Bernie Sanders in Nevada and California. Recent polls by the Los Angeles Times, The New York Times and Latino Decisions all show Sanders as the top Democratic presidential candidate choice among Latino Democrats. He has a particular strength with young Latinos. Read more

‘Later, but not late:’ Deval Patrick on his presidential bid. By Yamiche Alcindor / PBS NewsHour

Former Massachusetts Gov. Deval Patrick, one of several presidential candidates who did not qualify for the latest Democratic debate, spoke with NewsHour Weekend about the issues driving his decision to enter the 2020 race “later, but not late.” He joins Yamiche Alcindor from the campaign trail. Read more

How Andrew Yang’s Ideas Could Outlast the 2020 Campaign. By Elaine Godfrey / The Atlantic

Yang, a 44-year-old businessman and father of two from New York, launched a presidential campaign in November 2017 fixated on preparing the country’s workforce for coming technological shifts—a so-called fourth industrial revolution that he believes will lead to the culling of millions of American jobs. Yang has argued that the election of Donald Trump was largely due to job displacement spurred by automation. Read more

Federal researchers have found widespread evidence of racial bias in nearly 200 facial recognition algorithms in an extensive government study, highlighting the technology’s shortcomings and potential for misuse. Racial minorities were far more likely than whites to be misidentified in the US government’s testing, the study found, raising fresh concerns about the software’s impartiality even as more government agencies at the city, state and federal level clamor to use it. Read more

She’s shouting it out, for sure. Like no one else can, Jennifer Hudson is bringing her signature powerhouse vocals to the forefront in the new teaser for the trailer for Respect, the upcoming Aretha Franklin biopic. Read more

The best acting in a movie this year is in Clemency. Alfre Woodard gives a towering, career-defining performance as a prison warden struggling with the burden of overseeing death row executions, especially after becoming close to an inmate desperately pursuing a clemency appeal and pleading his innocence. And then there’s Aldis Hodge as Anthony Woods, the inmate on death row. Hodge creates a portrait of devastating humanity in the face of injustice, a man war-torn by the battles between hopelessness and resilience, resignation and faith, and anger and peace. Read more

Herman Boone, the high school football coach who inspired the Denzel Washington film Remember the Titans, has died, according to Alexandria City Public Schools in Virginia. Boone, who was 84, died just seven months after the death of Bill Yoast, his fellow coach at T.C. Williams High School. In 1971, Boone, who was black, and Yoast, who was white, formed a new community around football, attempting to heal the wounds of segregation with a newly integrated team – and winning a state championship in the process. Read more

Both Milwaukee and Los Angeles had league-best records of 24–4 heading into Thursday’s game, so the stakes were about as high as you’ll find in a mid-December affair. The Lakers’ Anthony Davis should, in theory, be the perfect defensive foil for Giannis. He’s built like a redwood and has the agility of a hummingbird, but Antetokounmpo still managed to put up 34 points in Milwaukee’s win. It didn’t matter who was guarding him, and the key to his offensive effectiveness was his performance from beyond the arc. Read more