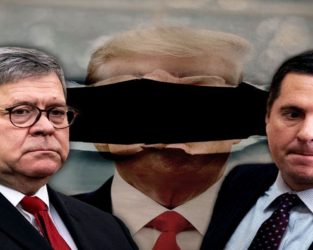 Featured – Will Republicans be able to wipe Trump’s crimes from the history books? By Amanda Marcotte / Salon

One of the oldest and most egregious examples of this is the decades spent by conservatives seeding the myth that the Civil War was about an abstract debate over “states’ rights,” when, in fact, the Confederacy clearly and undeniably sought to secede in order to protect the institution of slavery. It’s a lie that is up there with Holocaust denialism, in terms of its immorality. Sadly, it has had far more mainstream acceptance, and even more of a widespread social and political impact, than Holocaust denialism. The ongoing fights over the Confederate war memorials — largely erected in the 20th century to intimidate black people, but justified with the same “states’ rights” nonsense — is a testament to the way that a politically convenient lie can persist for decades, even in the face of overwhelming evidence contradicting it . Read more

With Kamala Harris Out, Democrats’ Leading Presidential Candidates Are All White. By Alanna Vagianos / HuffPost

What started out as the most diverse field of Democratic presidential candidates in history is quickly becoming a glaringly white one. The five candidates of color left — Cory Booker, Andrew Yang, Julian Castro, Tulsi Gabbard and Deval Patrick — have yet to qualify for the December debate stage. Read more

The visit with Barber’s racially diverse congregation held dual value for Buttigieg, illustrating his ability to tackle racial justice issues critically important to African-Americans and giving him a chance to portray his agenda as bigger than appealing to one specific voting bloc. He also hoped to introduce himself to black voters and lay out his plans for their community through their shared Christian faith and values. Read more

Senator Cory Booker of New Jersey on Tuesday proposed investing $100 billion in historically black colleges and universities and other minority-serving institutions, a broad proposal in a Democratic field that has offered varying plans to prop up this longstanding yet struggling arm of the educational system. Read more

To win the Democratic presidential nomination, a candidate needs to secure 1,990 pledged delegates. A significant number of delegates are at stake in states with large shares of black Democratic voters. Read more

Despite weeks of fallout over an email scandal that revealed the senior White House adviser Stephen Miller’s white nationalist views, Donald Trump’s administration has made clear it is standing by its man. Read more

“E pluribus unum” — out of many, one — is one of America’s traditional mottos. And you might think it would be reflected in reality. We aren’t, after all, just united politically. We share a common language; the unrestricted movement of goods, services and people is guaranteed by the Constitution. Shouldn’t this lead to convergence in the way we live and think? Read more

The sordid history of housing discrimination in America. By Sean Illing / Vox

As of 2016, the median wealth for black families in America was $17,600, while the median wealth for white families was $171,000. One of the biggest factors driving these disparities is housing. A home is the most valuable thing many people will own. And buying a nicer home in a nicer neighborhood has always been the easiest way to climb up the socioeconomic ladder. But that option hasn’t always been available to everyone, especially black families. Read more

It is well-established that the lower a family’s income, the more that family will pay for lighting and heating the house, running appliances, and keeping the wi-fi on. Such outcomes would suggest that this is a class problem or a function of rational markets. But according to a new study, all low-income households are not equally yoked: Residents of poorer, predominately white neighborhoods are less energy-cost burdened than people in predominately minority neighborhoods of similar economic status. Race matters. Read more

When it comes to access to clean water, ‘race is still strongest determinant,’ report says. By Nicole Acevedo / NBC News

When it comes to access to safe potable water, “race is still the strongest determinant,” according to a recent report that found that more than 2 million people in the U.S. and Puerto Rico don’t have access to running water and basic indoor plumbing. The human rights nonprofit Dig Deep alongside the U.S. Water Alliance, a nonprofit dedicated to promoting investment in water infrastructure, released the new estimate in a report this month, “Closing the Water Access Gap in The United States.” Read more

What’s Lost When Black Children Are Socialized Into a White World. By Dani McCleain / The Atlantic

I interviewed dozens of black mothers about how they help their kids navigate schools where they might be perceived as threats or made to feel unwelcome. Read more

Ralph Ellison’s Slow-Burning Art. Sixty years of the writer’s letters chart his evolution from iconoclast to icon. By Kevin Young / The New Yorker

“Selected Letters” is wisely divided by decade, starting with the nineteen-thirties, and Ellison’s voice is urgent from the start. The volume begins with letters home to Oklahoma, to his mother, Ida Bell, whom Ellison, newly matriculated at the Tuskegee Institute, in 1933, variously begs and bosses around for things he needs. The letters are concerned with money, or, rather, its absence. Read more

The Black Athlete in the Freedom Struggle. By AAIHS Editors

For our upcoming conversation, we’ll be talking about the Black athlete in the freedom struggle. We’re lucky to have not only scholars and authors with us, but Olympic athlete Wyomia Tyus, who made history. Can you each tell us a bit about your books and how you came to write these histories? Read more

Black Scholars Are Not ‘Rare Creatures. ‘When Purdue’s president said this, I had to respond because this myth is so pervasive. By G. Gabrielle Starr / NYT

In late November, the president of Purdue University, Mitch Daniels, told students that he will soon “be recruiting one of the rarest creatures in America — a leading, I mean a really leading, African-American scholar.” “Creatures?” a student asked. “Come on.” “It’s a figure of speech. You must have taken some literature,” Mr. Daniels said. “One of the rarest, let me say, rarest birds, rarest, rarest, rarest phenomena.” Read more

Looking for Frederick Douglass in Savannah. By Siddhartha Mitter / NYT

Frederick Douglass passed through this elegant Southern city only once, for the briefest of visits — a half-hour whistle-stop on his rail journey to a speaking engagement in Jacksonville, Fla. Today, however, Savannah is a pilgrimage site for Douglass researchers. The reason is a remarkable archive of letters, manuscripts, and other documents, by Douglass and by members of his family, in the possession of Walter O. Evans, a retired surgeon here and a major collector of African-American art and letters. Read more