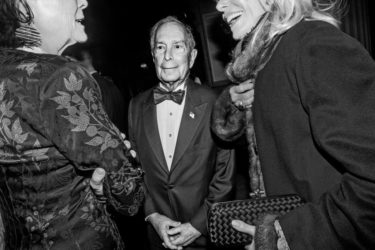 To choose Bloomberg as the alternative to Trump, then, is to bet that a chaotic, corrupt populist is a graver danger to what remains of the Republic than a grimly-competent plutocrat with a history of executive overreach and strong natural support in all our major power centers. Read more   Also see, The Notorious Michael R. Bloomberg And also see, Let’s Talk About That Time Mike Bloomberg Blamed Congress for the Financial Crisis

“In Black and brown communities, we’ve always seen … people promise us the world, then take office and give us nothing,” said Salaam, who was wrongfully imprisoned in the 1989 Central Park jogger case. Read more

Two kindergartners in Utah told a Latino boy that President Trump would send him back to Mexico, and teenagers in Maine sneered “Ban Muslims” at a classmate wearing a hijab. In Tennessee, a group of middle-schoolers linked arms, imitating the president’s proposed border wall as they refused to let nonwhite students pass. In Ohio, another group of middle-schoolers surrounded a mixed-race sixth-grader and, as she confided to her mother, told the girl: “This is Trump country.” Read more

Today’s Republicans Are Like Lincoln in Only One Way. By Megan Kate Nelson / NYT

Republicans in the 1850s and 1860s created a coalition dedicated to preventing the expansion of slavery and using federal power to promote public welfare. Historians know that Abraham Lincoln would not recognize his party or its values today. But today’s Republicans are Lincoln’s heirs in one significant way: They, like him, are determined to undermine the land rights of Native peoples. Read more

Latinos gave over $23M in 2019 to Democrats in presidential race; Sanders got the most. By Suzanee Gamboa / NBC News

According to the data, Sanders, an independent senator from Vermont, dominates in the race for Latinos’ dollars, snagging $8.3 million in 2019, or 36 percent of all contributions. Sanders leads in just about every state, except Sen. Amy Klobuchar’s home state, Minnesota, where she beats him by about $3,000. He also leads in most major cities. Read more

Asian Americans are a growing force in Nevada and ‘they want to be courted.’ By Fredreka Schouten / CNN

Asian Americans and Pacific Islanders now account for roughly 10% of the 3 million people who live in Nevada, census figures show, and Filipino Americans make up about half of that community. The number of eligible Asian Americans and Pacific Islanders eligible to vote in the state grew 35% from 2010 to 2016, zooming past the 13% growth rate for all eligible voters statewide, according to APIAVote, which tracks demographic and voting data. Read more

Los Angeles County is currently responsible for almost one-third of California’s incarcerated population. Black residents in the county are incarcerated at 13 times the rate of white residents, and LA County jails house more inmates than any other jail system in the country. More than 5,000 of those inmates are struggling with mental illness, making Los Angeles’ jail system the “largest in-patient mental health center” in the nation. Read more

Trump Doesn’t Hate Welfare When It Goes to Wealthy White Farmers. By Bryce Covert / The Nation

Donald Trump has never hidden his disdain for people who need government assistance. As far back as the 1970s, he grumbled that the Department of Justice was forcing him and his father to rent to “welfare cases” after it sued the Trumps for racial discrimination. Decades later, he called Barack Obama “our Welfare & Food Stamp President.” But one of his administration’s signature policies has laid bare the racial and class implications of this disdain. It’s not that Trump hates all welfare. He just hates it when it appears to be going to poor black people.  Read more

Appalachia Gets Special Funding. The Black Rural South Deserves It Too. By Greg Kaufman / The Nation

The question of whether Black History Month is still relevant, LaGarrett King, an associate professor of social studies education at the University of Missouri, Columbia, answers, “Absolutely yes.” King, whose research focuses on K-12 black history education, says the criticism, much of it from conservative historians, ignores that most Americans are not learning the nation’s real history when it comes to slavery and the trajectory of the black experience in America. Read more

Enslaved people were bought and sold in America for centuries. Today most of the sites of this trade are forgotten. Sarah Elizabeth Adams was around 5 when her mother was sold to a slave dealer in Lynchburg, Va. The auction took place in the mid-1840s, in the town of Marion, Va. Sallie, as she was called, was herself sold that day, but not with her mother: A man named Thomas Thurman purchased Sallie to take care of his sick wife. She would never see her mother again.   View here

Racist language is still woven into home deeds across America. Erasing it isn’t easy, and some don’t want to. By Nick Watt and Jack Hannah / CNN

Buried deep in the small print of deeds to a home that sold recently in this ritzy city lurks this stunning caveat: “Said premises shall not be rented, leased, or conveyed to, or occupied by, any person other than of the white or Caucasian race.” That is known as a racial covenant. And though now illegal, language like it still exists in the deeds to homes all across the United States. Read more

Graduates of historically black colleges and universities and Hispanic-serving institutions may be paying more to borrow and refinance their education loans, according to a report released this week by a group that works to alleviate student debt. Read more

There’s so little genuine, starry eyed you-had-me-at-hello romance in American movies today that when a new love story pops up, it’s hard not to root for it. That’s the case with “The Photograph,” about parallel affairs of the heart. One is hindered by ambition and miscommunication while the other suffers from familiar fears of commitment. Read more

Here’s one thing historians know to be true about Harriet Wilson: Some indomitable part of her spirit allowed her to survive a life on the margins of American society. In 1859, Wilson published a book that she gave a provocative title: Our Nig. That name is a derivative of a racist nickname given to the book’s protagonist, a little girl of mixed race who grows up as an indentured servant to a white family. The girl is tortured by the family matriarch, beaten and forced to sleep in a frigid crawl space. Even the kindest members of the family call her “nig.” Read more

There Have Been 10 Black Senators Since Emancipation. By Eric Foner / NYT

A few days ago, 300 people gathered in the Old State Capitol in Jackson, Miss., to celebrate the 150th anniversary of the election of Hiram Revels as the nation’s first African-American member of Congress. Shown is Senator Hiram Rhodes Revels, elected from Mississippi during Reconstruction. Read more

Mary Ellen Pleasant, one of the first black self-made millionaires, used an ingenious trick to build her fortune. By Tom Huddleston Jr. / CNBC

Mary Ellen Pleasant may not be a household name, but her story rivals that of any great American entrepreneur. In the 1800s, Pleasant became one of the first African-American female self-made millionaires in the U.S. despite the significant obstacles she faced as black woman. Read more

Where did the love go? In today’s black pop music, love songs are harder to find. By Jesse Washington / The Undefeated

The number of love songs by black artists on the Hot 100 has fallen from one or two dozen per year in decades past to an average of five per year since 2015. In 2017, there was only one black love song, Rihanna’s “Love on the Brain,” a painful lament with hints of domestic violence. The overall number of songs by black artists has increased on America’s most influential pop chart. But the proportion of black songs that are about love has fallen from two-thirds in 1969, to half in 1999, to roughly one-sixth over the past five years. Read more

The former president sits down with NBA stars to discuss leadership and engaging communities. View here
Visit our home page for more articles, book/podcast and video favorites. And at the top of this page register your email to receive notification of new editions of Race Inquiry Digest. Click here for earlier Digests.