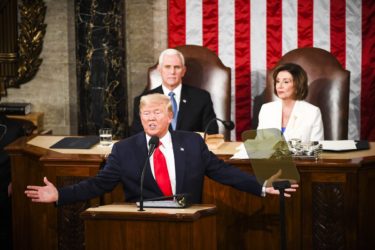 In his retelling of history, the president not only erased the millions of Native peoples prior to Columbus’s arrival in 1492, but suggested that their lands, livelihoods, and existence were something to be tamed and conquered. “Our ancestors,” as Trump referred to, were these settlers — white people from England and Europe. More recent immigrants were denigrated as “wicked human traffickers” and “illegals” in other parts of Trump’s speech. The nearly 40 percent of Americans who are not white apparently did not bear mentioning in Trump’s history. Read more  Also see, One of America’s most prominent racists just received the Presidential Medal of Freedom

The Simple Reason Trump Does What He Does. By David Leonhardt / NYT

It wasn’t the most notorious part of the “Access Hollywood” tape, but it was the most revealing: “And when you’re a star, they let you do it. You can do anything.” In the more than three years since the tape emerged, it’s become clear that the you-can-do-anything line wasn’t only describing Trump’s attitude toward women. It was describing his attitude toward everything: If you’re rich, famous or powerful, you can get away with much more than most people understand. Read more

Trump asks Alice Marie Johnson, “Are you sure?,” after she thanked the press during a White House celebration of the First Step Act in April 2019  A centerpiece of the president’s reelection pitch to black voters is the First Step Act, a bipartisan criminal-justice-reform bill he signed in 2018. He’s cited it repeatedly, including in Sunday’s ad, to cast himself as uniquely committed to making the criminal-legal system less punitive and thereby alleviating injustices tolerated for too long by his predecessors. Read more

The Racism at the Heart of Trump’s ‘Travel Ban.’ By Jamelle Bouie / NYT

In 2017, The New York Times reported on a meeting between Trump and several members of his cabinet in which he raged against foreign visitors to the United States. Citing a memo from Stephen Miller, the president’s chief immigration hard-liner, Trump complained about the pending arrival of thousands of people from Muslim and predominantly African nations. They “all have AIDS,” Trump reportedly said, about immigrants from Haiti. As for Nigerians? Once they saw America, they would never “go back to their huts.” Read more

Our Racist Presidents: New Book Pulls Back the Veil. By Kiki Monifa / The Progressive

Prejudential: Black America and the Presidents, a new book released Feb. 4, is the first title published by Steerforth Press’s T2P (Truth to Power) Books. It is written by Margaret Kimberley, a New York-based writer and activist for peace and justice issues. She is also an editor and columnist for the website Black Agenda Report.  “Prejudential” examines all forty-five U.S. Presidents and their attitudes toward black folk, and separates the myths from the truths. Read more

This Oscar-nominated Brazil documentary is a warning for democracies around the world. By Shasta Darlington / CNN

Brazilian director Petra Costa says her Netflix documentary should serve as a cautionary tale for the United States and the world at large. “It talks about the global phenomenon of how democracy dies today. Not with tanks, not with the military taking over,” she said in an interview with CNN. “But with the erosion of institutions, the spread of fake news, huge social media campaigns perpetrated and maybe paid for by corporations interested in the demise of democracy.” Her Oscar-nominated film, “The Edge of Democracy,” chronicles Brazil’s recent political upheaval, and follows the impeachment of a president, the imprisonment of a historical leader and the rise of a right-wing populist. Read more

States across the country have, in the wake of the Supreme Court’s 2013 decision striking down part of the Voting Rights Act, moved swiftly and repeatedly to reshape almost every element of voting. Lawmakers are using a variety of race and age-neutral measures with explanations as pragmatic as cost and as prudent as election security. “They can do it electronically, they can do it digitally and in ways we never thought about when I was coming along,” said Rep. James Clyburn, D-S.C. Read more

What Are the Democratic Candidates’ Climate Proposals for Black America? By Julia Craven / Slate

It’s a straightforward statement of fact that climate change is among the biggest imminent threats to humankind—and Black communities such as those in South Carolina are going to take a disproportionate hit. Contamination, sweltering days, and rising sea levels that drown out the low country are among the issues that have made South Carolina “somewhat of a hot spot in terms of environmental issues,” said Brenda Murphy, the president of the state’s chapter of the NAACP. Read more

Nearly four decades since the birth of the environmental justice movement in the 1980s, we face a new Goliath of ecological injustice. The Atlantic Coast Pipeline — a project that starts in West Virginia and cuts through Virginia and North Carolina — is poised to threaten poor, rural, black and indigenous communities across those states, forcing us to recognize and respond to the fact that marginalized communities still bear the bulk of our nation’s environmental burden. Read more

The Long History of the Anti-Abortion Movement’s Links to White Supremacists. By Alex DiBranco

Nearly a century after a race massacre left as many as 300 people dead, the city plans to dig for suspected mass graves that may have been used to dispose of African American bodies. Archaeologists searching for mass graves connected to the 1921 Tulsa Race Massacre agreed Monday night that Tulsa will conduct “limited excavations” in a city-owned cemetery to determine whether a “large anomaly” detected by ground-penetrating radar contains human remains. Read more

What 102 million Americans saw at the Super Bowl halftime show Sunday night was not just a musical showcase by two Latina superstars; it was not even close to the allegedly morally indecent display decried by Franklin Graham and other pearl-clutchers offended by the athleticism and artistry on display by two women of color. What they witnessed was the real face, and growing power, of America in 2020: There are 60 million Latinos in the United States — and growing — a powerful voting block that could impact Trump’s re-election this year. Read more

This Woman’s Work : Black Gold By Nina Simone. A live album that captured the rage and hope of the civil rights movement. By Studio 360 with Kurt Andersen / Slate

Black Gold displays Nina Simone’s talents at interpreting a song, not to mention her range, moving from soul and gospel to showtunes and folk music. Through it all, her distinctive voice soars into moments of defiance and uplift. Listen here

Young Black Americans who want to explore their roots can take a free birthright trip to Africa. Here’s how. By Alaa Elassar / CNN

There are a lot of things that make up who we are as people. Our physical features, our pet peeves, our passions — and our roots. It’s a puzzle we spend our entire lives trying to finish. As human beings, we are complex and difficult to understand. But sometimes, looking back at where we came from and discovering the successes, struggles and sacrifices of our ancestors can make that puzzle a bit more complete. For young black people, that discovery can mean the world. Read more

In an effort to rectify decades of prosecutions targeting LGBTQ Californians, Gov. Gavin Newsom on Wednesday announced a new clemency initiative to pardon people prosecuted under discriminatory laws. Newsom said the decision was inspired by calls from several state lawmakers to pardon black civil rights leader Bayard Rustin, a principal organizer of the 1963 March on Washington and a top adviser to the Rev. Martin Luther King Jr. Rustin was arrested in Pasadena on a “morals charge” in 1953 for having sex in a parked car with another man and spent nearly two months in jail. On Wednesday, Newsom announced he granted Rustin, who died in 1987, a posthumous pardon. Read more

When Tom Joyner, once dubbed “the hardest working man in radio,” turned off his mic in December and headed into semi-retirement, it set off a scramble for who would inherit his activist audience. Listeners by the thousands have been known to respond to the entreaties of the first African American to have a nationally syndicated radio program to vote, go to the doctor or show their economic muscle. Joyner often has been described as the voice of the black community, a perennial stop for candidates on the stump or celebrities plugging their latest venture. Read more

How Ballerinas Of Color Are Changing The Palette Of Dance. By Rohina Katoch Sehra / HuffPost

Despite its historical impassivity to race politics, ballet has shown that it can rise to the ask of representation. While it’s now well-known that Misty Copeland became the first female African-American principal dancer at American Ballet Theater in 2015, other examples abound. Read more

Patrick Mahomes ushers in Era of the Black Quarterback. By Jason Reid / The Undefeated

On sports’ biggest stage here Sunday night, Mahomes emphatically punctuated the NFL’s 100th season – the one in which African American passers shined brighter than at any time previously in NFL history – leading the Kansas City Chiefs to a 31-20 victory over the San Francisco 49ers in Super Bowl LIV at Hard Rock Stadium. Read more