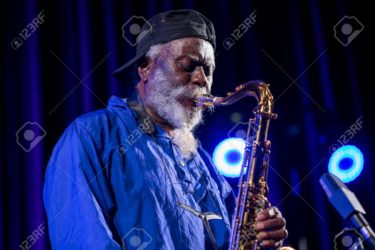 Featured – “If You’re in the Song, Keep on Playing”: An Interview With The Legendary Saxophonist Pharoah Sanders. By Nathaniel Friedman / The New Yorker

Jazz musicians have always placed a premium on “saying something.” Technique, training, and theory will only get you so far, and may even lead you in the wrong direction; what matters is the ability to hit on an emotion or an idea that feels at once familiar and revelatory—to speak a common language in a decidedly uncommon way. From this standpoint, few musicians have said more than the saxophonist Pharoah Sanders. Born in Little Rock, Arkansas, the son of a school-cafeteria cook and a city employee, Sanders moved to New York in 1962, at the height of jazz’s postwar avant-garde. We talked about his beginnings as a musician, his approach to recording over the years, and his collaborations with jazz legends. Read more

This upcoming Martin Luther King Jr. Day promises to be an especially sad one. As evinced by the deteriorating social circumstances both at home and around the world, we have done a poor job living up to his legacy. And while we still have Dr. King’s prophetic voice as a beacon, it feels like we somehow went into reverse, deep into a dystopian wilderness since he died. By my calculation, we are about as far from the clearing of his “promised land” as we have been at any point in my 64 years. Read more

Biden Continues to Churn, Steyer’s Got Money to Burn and Buttigieg’s Got a Lot to Learn: 2020 Presidential Black Power Rankings, Week 24. By Jason Johnson / The Root

Older black folks are watching, they’re engaged and they want Trump out of office by impeachment, election or God’s plan. Any way will work. Which got the committee thinking, why not dedicate one week of The Root Presidential Black Power Rankings to a committee of older black folks? Thus Senior Week was born. This week, the entire rotating ranking committee is composed of black folks over 60, from activists to retired folks and everything in between. Read more Also see, Biden leading Democratic 2020 field among black voters, poll shows

The Wisconsin Institute for Law and Liberty (WILL), a conservative think tank, is suing the state of Wisconsin to demand that it continue the practice, begun under former Governor Scott Walker, of purging voter registrations in cases where the state believes registered voters have changed addresses. Because long lines to vote only happen in urban areas where most non-whites live, the result of the voter purges is that  fewer people of color will vote. Read more

Latino Voters Will Decide the 2020 Election. By Jorge Ramos / NYT

This year, for the first time in history, Hispanics will be the largest minority group of potential voters in the United States. According to the Pew Research Center, 32 million Latinos will be eligible to vote in 2020, compared with 30 million African-Americans. For Hispanics, it all comes down to economic opportunity, the fight against discrimination and the right to be treated as American citizens. Read more

The United States has made progress in residential desegregation since the passage of the Fair Housing Act in 1968. Segregation between whites and blacks, as measured by demographers, declined by roughly a third between 1970 and 2010, according to statistical analysis by University of Michigan sociologist William H. Frey. Nevertheless, there is still a long way to go toward the ideal of discrimination-free housing. On Tuesday the Trump administration released a draft rule that waters down the definition of “affirmatively furthering fair housing.” Read more

Children of color already make up the majority of kids in many US states. By Rogelio Saenz and Dudley L. Poston, Jr / The Conversation

Demographers project that whites will become a minority in the U.S. in around 2045, dropping below 50% of the population. That’s a quarter-century from now – still a long way away, right? Not if you focus on children. White children right now are on the eve of becoming a numerical minority. The U.S. Census Bureau projects that, by the middle of 2020, nonwhites will account for the majority of the nation’s 74 million children. Read more

In her new book, Franchise, Marcia Chatelain explains how black franchise owners became the backbone of the industry. According to Chatelain’s account, McDonald’s particularly flourished, snapping up property nationwide and setting off cycles of simultaneous investment and divestment. Those cycles would prove both a curse and benefit to the first black franchise holders in the 1960s. Read more

The pleasure is all Chelsea’s. “Hello, Privilege. It’s Me, Chelsea” follows comedian Chelsea Handler as she confronts and explores her personal and cultural impacts around white privilege. Handler travels around the country speaking with a wide range of people on the topic of race including fellow comedians Kevin Hart, Tiffany Haddish, and W. Kamau Bell, anti-racism writer and activist Tim Wise, a Republican women’s group in Orange County, CA, college students at an open mic night, and her former high school boyfriend in New Jersey. Watch here

Coming or going, Meghan gets the blame — and it’s because of her race. By Lisa Respers France / CNN

From the moment Prince Harry and Meghan Markle made their relationship known to the public in 2016, the message many Britons sent to her was clear: You aren’t one of us, and you aren’t welcome. Meghan, a biracial, divorced American actress, was far from what many envisioned as a fairy-tale match for a beloved member of the British royal family. While many in the UK welcomed her, the British tabloid media and a large swath of the Twitterverse were not kind. Read more Also see, Black Britons Know Why Meghan Markle Wants Out

At 16, She’s a Pioneer in the Fight to Cure Sickle Cell Disease. By Gina Kolata / NYT

Helen Obando, a shy slip of a girl, lay curled in a hospital bed in June waiting for a bag of stem cells from her bone marrow, modified by gene therapy, to start dripping into her chest. The hope was that the treatment would cure her of sickle cell disease, an inherited blood disorder that can cause excruciating pain, organ damage and early death. Read more

“The 2020 census could leave communities across the country undercounted, underrepresented and underfunded,” Maloney said. “When the administration proposed to add the citizenship question without any testing, we knew right away we had a five-alarm fire … like any fire, the damage that has been done takes time to repair,” Yang told the committee. Read more

Mississippi prisons are in crisis. On Tuesday, a congressman called for a federal investigation after at least five people incarcerated in the state were stabbed or beaten to death during a week at the start of the year. A county coroner, overwhelmed with bodies, said prison gangs “are at war.” After rioting, the corrections department began a statewide lockdown, but two inmates at Mississippi State Penitentiary at Parchman, the state’s highest security lockup, escaped. They were later caught, and the lockdown has been lifted at some facilities. Read more

Kim Novak was Harry Cohn’s revenge on Rita Hayworth. Sammy Davis Jr. was Kim Novak’s revenge on Harry Cohn. What began as a boldface item in Dorothy Kilgallen’s gossip column in the New York Journal-American threatened to become a national scandal on the eve of America’s long struggle for civil rights. It started in 1957 at Chicago’s most famous nightclub, Chez Paree. The man known as “the greatest entertainer in the world” was onstage, the smoke from his cigarette trellising the air. You had to see him: the gorgeous shirt, the cuff links, the way everything billowed. He was in the dark and suddenly the spotlight picked him up—he was electric, he was hot, it was almost a sexual thing. He was singing to Kim Novak. Read more

The week before the Oscar nominations on Jan. 13 was meant to be the most exciting phase of awards season yet: After a glittery Golden Globes ceremony on Sunday, many of the most important industry guilds and groups weighed in with their own nominations during the next two days, helping to clarify the Oscar race and winnow down the ultimate list of contenders. That narrowing list has begun to exclude not just some of the most exciting performances and films of the season, but also many of the movies directed by women or featuring people of color. Read more

NFL Owners Have a Problem With Coaches of Color. by Jemele Hill / The Atlantic

Last month, a nonprofit think tank published a study about the black experience in corporate America, and the results were what one might expect. Black professionals largely feel invisible, receive less support from upper management than their white counterparts do, often experience subtle and overt racism on the job, and are discouraged by the lack of opportunities for advancement. Had the Center for Talent Innovation surveyed black coaches who hope to be head coaches in professional football someday, the researchers would probably find the exact same problems. Read more Also see, Black coaches are losing patience with the NFL’s hiring process: ‘You know you have no shot’