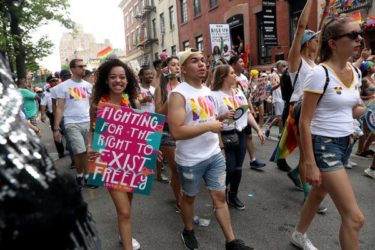 Featured – The Decade We Changed Our Minds. By Charles M. Blow / NYT

America is always in a state of flux. The country is an eternal experiment, aiming at evolution, betting on its own betterment. It has its dark sides — racism, sexism, xenophobia, homophobia — but it clings to the idea, the fairy tale, that change and progress are not only possible, but they are intrinsic to the dream that is this nation. And, every so often, a period arises in which some of that dream manifests and change is clear and indisputable, a leap forward for a people. The 2010s were just such a decade. Read more

The Decade in Asian America. By Jenn Fang / NBC News

Asian Americans underwent a profound coming of age over the last decade. The community became the fastest-growing racial or ethnic group in America, experiencing the pride, pain and progress that come with growth. Once a group stereotyped as perpetually foreign and too small to have diverse political opinions, Asian Americans — thanks to rapid expansion, coupled with a rise in grassroots activism — paved the way for a renaissance in media representation and reached historic milestones for political engagement. Read more

In “Their Eyes Were Watching God,” author Zora Neale Hurston wrote, “There are years that ask questions and years that answer.” The last decade did much of both for my generation — Black millennials who are determined to live our lives with dignity and shape a new future for ourselves and our communities free of oppression. Read more

Fifty Years After the Police Murders of Black Panthers Fred Hampton and Mark Clark. By Norman Stockwell and Frances Madeson / The Progressive

Early in the morning of December 4, 1969, fourteen police officers executed a search warrant on a Chicago flat rented by the Black Panther Party. They were supposedly looking for illegal weapons. Instead, they shot and killed two people, and left four others wounded. Fred Hampton, chair of the Black Panther Party of Illinois, died of two gunshots to the head. His murder, along with that of fellow Panther Mark Clark, sent waves of shock and outrage through their community. Read more

The New York Times added a lengthy editor’s note and removed a racist study from a column by conservative opinion writer Bret Stephens explaining why “Jews are smart.” Stephens’ Saturday column, titled “The Secrets of Jewish Genius,” immediately came under fire after he was accused of “using eugenics talking points” in his piece discussing the alleged superior intelligence of Ashkenazi Jews. (That term refers to Jewish people of predominantly European ancestry.) Read more

After five people were stabbed at a rabbi’s home during a Hanukkah celebration over the weekend, the Jewish community in New York and around the United States is grappling with how to stem growing anti-Semitic violence. “There are radical questions to be asked about the state of Jewish people in America, but we aren’t at any point” where there are answers, said Kelsen, of Yeshivat Chovevei Torah. Read more

“The number of congressional hearings on these topics in 2019 was significant, and an important metric of the seriousness of these threats at the national level,” Selim said. “And many members of Congress, both Democrats and Republicans, have used their public profiles to condemn these lethal forms of violent extremism, but more still needs to be done to appropriately resource these threats at the federal, state and local levels.” Read more

Though you may not know Trump as I once did, you do know that only a weak man speaks endlessly of his strength and only an ignorant man brags incessantly of his wisdom. Despite these debilitating flaws, or perhaps because of them, Adm. William McRaven — the man who oversaw the raid that killed Osama bin Laden — believes Donald Trump is the greatest threat facing American democracy. How voters respond to that danger in the new year may well determine the arc of our future for a generation to come. Read more

Gerrymandering is alive and well. The coming battle will be bigger than ever. By Jane C. Timm / NBC News

The Supreme Court has declined to outlaw partisan gerrymandering — saying only states can police that — but it also removed a key safeguard against the practice by gutting the Voting Rights Act in 2013. That ruling means states with a history of racial discrimination, including Texas, Florida and North Carolina, no longer have to clear their redistricting maps with the Department of Justice before putting them in place. That ruling, along with the growing populations, changing demographics and mostly single-party control, sets up Southern states as the most likely territory for partisan gerrymandering, experts said. Read more  Also see, The decade Republicans hijacked our democracy, via the gerrymander

First there was ‘diversity.’ Then ‘inclusion.’ Now H.R. wants everyone to feel like they ‘belong.’ By Jena McGregor / Wash Post

Move over, “diversity.” Make room, “inclusion.” Today, the hot corporate buzzword in the diversity field is “belonging.” The word is popping up everywhere. LinkedIn, Nordstrom, HubSpot, DoorDash and other companies all now have executives with job titles such as manager of “diversity, inclusion and belonging” or vice president of “global culture, belonging, and people growth.” Read more

In a Homecoming Video Meant to Unite Campus, Almost Everyone Was White. By Julie Bosman, Emily Shetler and Natalie Yahr / NYT

The video was created to show off the University of Wisconsin. Instead, it set off a furor, and a reckoning over what it means to be a black student on campus. The video was just two minutes long: a sunny montage of life at the University of Wisconsin’s flagship campus in Madison. Here were hundreds of young men and women cheering at a football game, dancing in unison, riding bicycles in a sleek line, “throwing the W” for the camera, singing a cappella, leaping into a lake. Read more

A mother’s warning: If you have white teen sons, listen up. By Sara Sidner / CNN

Joanna Schroeder has a warning for parents of teen and tween white boys: If you don’t pay attention to their online lives, the white supremacists will. “They’ve studied the way that our young men interact online, and they have looked at what these boys need,” she said. “And they have learned how to fill those needs in order to entice them into propaganda.” That’s what she found when she asked her own teenager if they could go through some of his social media together. Read more

The citizenship question the Trump administration wanted to add to the 2020 census would have likely been especially sensitive in areas with higher shares of Latinx residents and noncitizens. That’s among the Census Bureau’s final conclusions from its recent experiment testing public reaction to the question. If courts had not blocked the question from appearing on census forms, it would have also likely lowered self-response rates in parts of the U.S. where Asian residents make up between 5% and 20% of the population, according to the Census Bureau’s final report on the national experiment conducted earlier this year. Read more

Why We Need A Teacher Workforce That’s Both Diverse And Knowledgeable. By Natalie Wexler / Forbes

Low-income minority students benefit from having teachers who look like them, studies show. But qualified minority teachers are in short supply, leading some to advocate relaxing the qualifications. The problem is, that risks putting disadvantaged kids even further behind. Only about 50% of American students in kindergarten through 12th grade are white;16% are black and 25% Hispanic. For teachers, the proportions are different: 80% are white; only 7% are black and 9% Hispanic. Read more

The Ongoing Struggle of John Lewis. By David Remnick / The New Yorker

It was January, 2009, and I don’t think I’d ever seen someone so full of hope: on the Sunday before Barack Obama’s first inauguration, John Lewis arrived at Shiloh Baptist, an African-American church in Washington founded just after the Emancipation Proclamation was issued, to preach “the King message.” Lewis told me that, for days, he had been walking around the capital in a “state of unreality.” Lewis, who announced this Sunday that he will soon begin treatment for Stage IV pancreatic cancer, is seventy-nine, and he has represented Georgia’s fifth congressional district since 1987. Read more