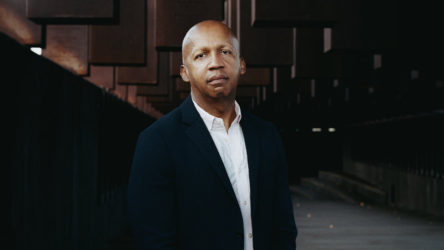 Featured – ‘Just Mercy’ Attorney Asks U.S. To Reckon With Its Racist Past And Present. By Terry Gross / NPR

Public interest lawyer Bryan Stevenson lives in Alabama and is the founder of the Equal Justice Initiative, which works to combat injustice in the U.S. legal system. The new movie, Just Mercy, is an adaptation of his 2014 memoir of the same name. He says that the fact that his state honors Lee at all — let alone on the same day as King — is a sign that America has not acknowledged the evils of its past. “In the American South, where I live, the landscape is littered with the iconography of the Confederacy,” Stevenson says. “We actually celebrate the architects and defenders of enslavement. For me, that has to change if we’re going to get to the kind of healthy place I think we need to get to.” Listen and read here  Also see, Alabama lynching memorial expands to cover the stories of 2,000 more people

The Southern Poverty Law Center obtained approximately 900 emails sent in 2015 and 2016 between Miller — who at the time was an aide to Sen. Jeff Sessions — and his contacts at Breitbart News, the right-wing propaganda site then run by Steve Bannon, the future Trump campaign CEO and White House strategist. In these emails, Miller defends white supremacist neo-Confederates and traffics in eugenics and other forms of white supremacist pseudoscience that purports to prove the inferiority of black people and other nonwhites. Read more

The Agitated M.L.K. I Came to Love. By Charles M. Blow / NYT

That evolution, toward a more “solid realism,” toward the more rational King, toward the more radical King, is why I happen to believe that one of King’s most consequential speeches is a little-discussed address he gave in 1967 at Stanford University. It was called “The Other America.” In it, King blasted “large segments of white society” for being “more concerned about tranquillity and the status quo than about justice, equality, and humanity.” Read more

I do not say this hyperbolically, but Trump’s election felt like a repudiation of a half century of black assimilation and aspiration to integration, of lifetimes of relationships, and of strategies and choices to better navigate the maze of white America. It didn’t feel personal. It was personal. Something was dying, though at first I could scarcely pinpoint what, since I did not possess previously any great belief in this country’s commitment to black equality, either on a state or personal level. In other words, I was already down following the election but I did not have far to fall. Read more

Why Trump Persists. By Thomas B. Edsall / NYT

The failure of the American electorate to rise up in opposition to President Trump — whose outrages are well-documented — suggests that voters are less tolerant, less empathetic and less insistent on integrity than many believe. The election of Trump and his first three years in office have revealed a nation deeply ambivalent about immigration, race, equality, fairness — even about the ground rules of democracy itself. Read more

CNN’s Melissa Bell speaks with Holocaust survivors for the 75th anniversary of the liberation of Auschwitz-Birkenau concentration camp. Watch here  Also see, Why Anti-Semitism Is on the Rise in the United States

The Neighborhoods We Will Not Share. By Richard Rothstein / NYT

In the mid-20th century, federal, state and local governments pursued explicit racial policies to create, enforce and sustain residential segregation. The policies were so powerful that, as a result, even today blacks and whites rarely live in the same communities and have little interracial contact or friendships outside the workplace. Read more

Her political activism began in Harlem in the 1930s. She worked with the cooperative movement during the Great Depression; supported the campaign against Italy’s invasion of Ethiopia; and opposed the racist conviction of the famed Scottsboro boys. Baker was a field secretary and director of branches for the N.A.A.C.P. in the 1940s, and she traveled throughout the Jim Crow South, organizing against discrimination and recruiting people to the Civil Rights Movement. Read more

Prison officials in Mississippi said on Tuesday that two inmates were beaten to death at the state penitentiary in Parchman, coming after a burst of violence across the state that left five inmates dead and underscored the troubles facing a correctional system the new governor has called a “catastrophe.” Parchman, a maximum-security prison notorious for its harsh conditions, has been on lockdown since a gang-fueled spate of violence and disorder several weeks ago. Read more

Rural Montana Had Already Lost Too Many Native Women. Then Selena Disappeared. By Jack Healy / NYT

For decades, with little public notice, Native women have gone missing or been found murdered. The search for Selena Not Afraid showed how much things had changed. Last year, 5,590 Indigenous women were reported missing to the F.B.I.’s National Crime Information Center, but advocates say the staggeringly high rates of violence suffered by Indigenous people are still not fully reflected in official accounting. Read more

The Necessity of the Indian Child Welfare Act. By Leah Litman and Matthew L M. Fletcher / The Atlantic

Charles Fuller’s ‘A Soldier’s Play’ Is a Brilliant, Searing Indictment of Racism on Broadway. By Tim Teeman / Daily Beast

World War II rumbles on, overseas and unseen in Charles Fuller’s A Soldier’s Play, which won the Pulitzer Prize for Drama in 1982. Within the play, another war on bodies and minds—still as corrosive today as it was then—plays out, as the poison of racism and oppression turns both inward and outward on a group of black soldiers. This Roundabout Theatre Production (opening Tuesday night to March 15 at the American Airlines Theatre), almost 40 long years since the play’s creation, is also its Broadway debut: an indictment of prejudice in and of itself. Read more

Although the NFL season is almost over, there is unfinished business and a bad taste left in many of our mouths by a hiring cycle in which not one black head coach was hired. What was striking about this round of nonhires was the brazenly unrepentant nature of the hiring. The tone was one of: “We don’t have to hire African Americans and you can’t make us.”Shown is the new Miami Dolphins head coach Brian Flores.   Read more