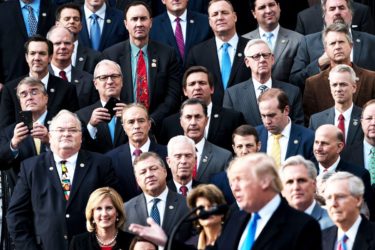 Featured – How Republicans made millions on the tax cuts they pushed through Congress. By Peter Cary / Center for Public Integrity and Vox

Cutting tax rates for companies like Apple and hundreds of other stocks they own was one of many ways Republican lawmakers enriched themselves after they passed the tax law, according to a Center for Public Integrity analysis of the 186-page law and members’ financial disclosure forms. Democrats also stood to gain from the tax bill, though not one voted for it; all but 12 Republicans voted for the tax bill. The tax law’s centerpiece is its record cut in the corporate tax rate, from 35 percent to 21 percent. At the time of its passage, most of the bill’s Republican supporters said the cut would result in higher wages, factory expansions, and more jobs. Instead, it was mainly exploited by corporations, which bought back stock and raised dividends. Read more

The former New York City mayor spoke out against racial income inequality and outlined an economic proposal aimed at increasing the number of black-owned homes and businesses. The plan includes a $70 billion investment in the nation’s most disadvantaged neighborhoods. Read more

Listen to Ari Berman talk with President Barack Obama’s attorney general Eric Holder, about some of the most insidious voter suppression tactics across the country, in a wide-ranging conversation moderated by Broad City star Ilana Glazer, on this episode of the Mother Jones Podcast. Read more

The complicated beauty of student debt forgiveness, according to the CEO who cleared the loans of nearly 400 Morehouse grads. By Abigail Jhess / CNBC

In May 2019, Robert F. Smith, founder and CEO of private-equity firm Vista Equity Partners, gave a commencement speech to Morehouse College’s graduating class. Then, the billionaire announced that he and his family would pay off the roughly 400 graduating seniors’ student loans — as well as loans taken out by students’ parents and guardians. At the 50th World Economic Forum in Davos, Switzerland, Smith spoke with CNBC about the economic and philosophical principals behind his decision. Listen and read more

Anita Hill, the law professor who accused Justice Clarence Thomas of sexually harassing her during his Supreme Court confirmation hearing in 1991, told an audience at the University of Iowa on Thursday that she would not accept an apology from former Vice President Joe Biden for his treatment of her at the time. Biden has been a consistent frontrunner in the 2020 Democratic presidential campaign. Read more

After Our Reporting, Connecticut Officials Are Taking On Housing Segregation. By Jacqueline Rabe Thomas and Jenna Carlesso / Propublica

Supreme Court Could Be Headed To A Major Unraveling Of Public School Funding. By Nina Totenberg / NPR

In a case with potentially profound implications, the U.S. Supreme Court’s conservative majority seemed ready to invalidate a provision of the Montana state constitution that bars aid to religious schools. A decision like that would work a sea change in constitutional law, significantly removing the longstanding high wall of separation between church and state. Read more

A New Face of White Supremacy: Plots Expose Danger of the ‘Base.’ By Neil MacFarquhar and Adam Goldman / NYT

The plans were as sweeping as they were chilling: “Derail some trains, kill some people, and poison some water supplies.” It was the blunt, bloody prescription for sparking a race war by a member of the Base, a white supremacist group that has come under intense scrutiny amid a series of stunning recent arrests. Read more

The Long War Against Slavery. A new book argues that many seemingly isolated rebellions are better understood as a single protracted struggle.  By Casey Cep / The New Yorker

In a new book, the historian Vincent Brown argues that these rebellions did more to end the slave trade than any actions taken by white abolitionists . “Tacky’s Revolt: The Story of an Atlantic Slave War” (Belknap) focusses on one of the largest slave uprisings of the eighteenth century, when a thousand enslaved men and women in Jamaica, led by a man named Tacky, rebelled, causing tens of thousands of pounds of property damage, leaving sixty whites dead, and leading to the deaths of five hundred of those who had participated or were accused of having done so. Read more

Slavery, and American Racism, Were Born in Genocide. By Greg Grandin / The Nation

LeBron James opens up and reflects on Kobe Bryant after passing him on NBA scoring list. By Jeff Zillgitt / USA Today

“I believe I was playing (a high school game) in New Jersey and the All-Star Game, if I’m not mistaken, and you all can correct me, was in Philly,” James said. “That Saturday, me and Maverick (Carter) drove to the Intercontinental (hotel) in downtown Philadelphia, and he gave me a pair of his shoes which I ended up wearing that following night. It was the red, white and blue Kobes. I was a (size) 15 and he was a 14 and I wore them anyways. On Sunday Kobe Bryant was killed in a helicopter accident. Read more

The Joy of Lizzo. By Brittany Spanos / Rolling Stone

She has become, at 31, a new kind of superstar: a plus-size black singer and rapper dominating the largely white and skinny pop space, all while being relentlessly uplifting and openly sexual on her own terms. Her story is just as remarkable and radical as her stardom: years of self-doubt and struggle, followed by an unorthodox but swift ascent jump-started by “Truth Hurts,” a two-year-old song that wasn’t even on her new album. Read more

Diddy calls out Grammys for not respecting black music ‘to the point that it should be.’ By Mesfin Fekadu and The Associated Press

Sean “Diddy” Combs called out the Grammy Awards for dissing rap and R&B stars in its major categories in a blazing speech that earned him a standing ovation from Beyoncé, Jay-Z and several other music industry players. At the end of his 50-minute speech Saturday night at Clive Davis’ white-hot pre-Grammys gala, where Combs was honored, the music mogul demanded change and said he was happy to be involved in making a difference. Read more

How the Grammys Descended Into Behind-the-Scenes Chaos. By Andrew R. Chow / Time

In an interview on Good Morning America on Thursday, Dugan claimed that the Grammy awards are often rigged by board members: “There are incidents of conflict of interest that taint the results,” she said—sparking a denial from the Academy. Shown is former Recording Academy president and CEO Deborah Dugan and interim president Harvey Mason Jr.   Read more

#OscarsSoWhite meets #OscarsSoConservative. The Academy has overlooked some of this year’s most progressive films. By Ed Rampell / The Progressive

The Motion Picture Academy has come under attack again for the lack of diversity in its annual Oscar nominations. Similar to 2016, when the #OscarsSoWhite hashtag emerged, only one out of 2020’s twenty lead and supporting acting nominees is a thespian of color. None of the five best director contenders are women—as actor and writer Issa Rae pointedly noted when co-announcing the noms, offering “congratulations to those men.” Read more