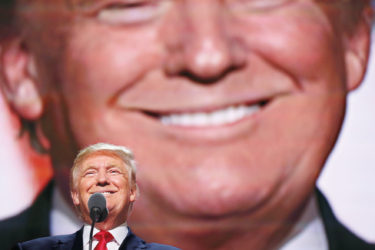 Featured – Donald Trump and his demons: Why the assault on democracy will get worse. By Chauncey DeVega / Salon

Donald Trump is an authoritarian and an autocrat. For him and others of such ilk, violence is political currency in the form of raw power. Autocrats and authoritarians such as Trump are de facto crime bosses who just happen to be leaders of their respective countries. As such, Donald Trump uses violence in an effort to intimidate his enemies and control the public. Trump also uses violence to control his allies, servants and other supporters. After Trump’s acquittal, his political chorus will continue to sing his praises. Powered by a mix of self-righteousness, white male rage, and right-wing victimhood, entitlement and grievance, Trump will likely seek revenge, launching a fully unrestrained attack on the Constitution, the rule of law, American democracy, the Democrats, liberals, progressives and any person or group who dares to try to hold him accountable. Read more

America, the Idea, Is Lost. By Charles M. Blow / NYT

The idea of America that most of us have come to embrace — that of a functioning democracy responsible and responsive to its citizens who are entitled to vote and whose votes are equal — is lost. In fact, it may never have existed in that way at all. And the trends in society are now toward the worse rather than the better. Read more

Trump. If Christopher Caldwell’s new book, The Age Of Entitlement,  is any indicator, the conservative movement is only headed deeper into gloom, resentment and white identity politics. The real heart of Caldwell’s story is race and civil rights. A more descriptive subtitle might be: “How the Civil Rights Revolution Overturned the Constitution, Divided America and Victimized Whites.” Read more

Trump’s backers and apologists have put both their white privilege and white fragility  on parade. Whether in the form of a rigged trial or an armed demonstration, groups that primarily represent the interests of white Americans have behaved as if the end times are coming. They aren’t under any real threat, yet they have reacted with the kind of fervor and extremism that nonwhite groups with valid grievances couldn’t dream of displaying. Read more

Val Demings has an American dream. The impeachment trial is testing it. By Ellen McCarthy / Wash Post

In 1968, Florida sixth-grader Val Demings was chosen for a coveted role: safety patrol. It was a big deal. For the first six years of her education, Demings had been bused across Jacksonville to a school for black children. Now, as one of the few black members of her new school’s first integrated class, she had impressed her teachers enough to be elevated to a position of authority. The Senate trial marks a test both for the congresswoman and the country, and Demings sees their stories as closely intertwined. Read more

Editorial: Trump’s tax cuts are exploding the deficit. The poor are going to wind up paying the tab. By The Editorial Board/ LA Times

The CBO projects that the fastest growing part of the federal budget will be interest payments on the rising debt — spending that delivers no tangible benefit for taxpayers while leaving less money for programs that do. We’ve seen this movie before. Some supposed fiscal conservatives will demand more tax cuts to try to jump-start faster growth (in fact, Trump and House Republicans floated just such an idea before the 2018 election and again last year). Others will blame the problem on federal spending and demand cuts — not to the military and security programs that Trump has vastly expanded, not to the vast tax giveaways and subsidies, but to the safety net programs the administration is already trying to restrain. Read more

Trump allies are handing out cash to black voters. By Ben Schreckinger / Politico

Allies of Donald Trump have begun holding events in black communities where organizers lavish praise on the president as they hand out tens of thousands of dollars to lucky attendees. Read more

Mississippi’s governor is shutting down a unit inside the prison where 9 inmates have died. By Christina Maxouris / CNN

Mississippi’s newly sworn-in governor vowed Monday to help “turn the page” for the state’s prison system following the deaths of multiple inmates within the past month and a lawsuit filed on behalf of inmates over prison conditions. Read more

Even as Chief Justice John Roberts presided over the Senate’s trial of President Trump on Monday, the Supreme Court gifted senior White House adviser and documented white nationalist Stephen Miller by lifting a lower court’s nationwide injunction against discriminatory new rules that represent the strongest effort to restrict legal immigration into the U.S. in more than a century. Read more

The sporting world and beyond is mourning the death of Kobe Bryant, aged 41. The NBA legend and his 13-year-old daughter Gianna were among nine on board a helicopter that crashed on Sunday. CNN looks back at 24 defining moments in the career of an NBA great, who mesmerized, broke records and transcended his sport. Read more Also see, Why the death of Kobe Bryant hits us so hard — and how to cope. And also see, Investor, author, filmmaker: The entrepreneurial second act of Kobe Bryant

Coming of Age in Jim Crow DC: A New Book About Navigating the Politics of Everyday Life. By Paula C. Austin / AAIHS

Coming of Age in Jim Crow DC offers a complex narrative of the everyday lives of Black young people in a racially, spatially, economically, and politically restricted Washington, DC, during the 1930s. In contrast to the ways in which young people have been portrayed by researchers, policy makers, law enforcement, and the media, Paula C. Austin draws on previously unstudied archival material to present Black poor and working class young people as thinkers, theorists, critics, and commentators as they reckon with the boundaries imposed on them in a Jim Crow city that was also the American emblem of equality. Read more

Racism Is Not Dead in Sports. By Dave Zirin / The Nation Podcast

This week we speak to Professor Kenneth Shropshire about a host of issues pervading sports and how today’s students are taking them in. Listen here