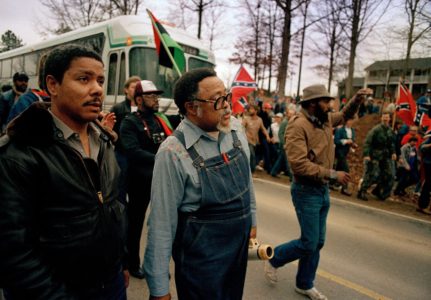 Featured – “Do You Think You’re Not Involved?” The Racial Reckoning of “Blood at the Root.” By Casey Cep / The New Yorker

“Blood at the Root” likewise reads like an archetype: not only of how a memoir can transcend the personal to become a study of politics and place but also how a scrupulous account of the past might prepare us to look more honestly at the present. A national reckoning cannot only involve looking elsewhere, any more than it can only involve looking at others. It must necessarily include looking at where we live, especially for those of us who are white, and considering more carefully the question that Natasha Trethewey asked Patrick Phillips more than a decade ago: “Do you think you’re not involved?” Read more

Putting Heroes, and Traitors, Where They Belong. By The Editorial Board / NYT

African-Americans were nonpersons in the eyes of the state when the federal government started to name U.S. Army installations for Confederate officers. Black people in the South were being lynched with impunity for such offenses as seeking the vote, competing with white people in business or simply failing to give way on the sidewalk. Shown is Robert E. lee. Read more

Related: Arthur Ashe, who stood for so much, might be the last statue standing in Richmond. By Chuck Culpepper / Wash Post

Related: Woodrow Wilson Was Even Worse Than You Think. By Colin Woodard / TPM

Why Trump’s White Grievance Message Strikes a Sour Note in the Suburbs. By Katie Glueck / NYT

As the president casts himself as a bulwark against “angry mobs,” there are signs that he is alienating voters in bedroom communities who view him as a deeply flawed messenger on issues of race. Read more

Related: Majority of Americans say race discrimination is a big problem in the U.S. By Eugene Scott / Wash Post

Related: As coronavirus surges in Republican territory, so does rage over masks. By Gus Garcia-Roberts / USA Today

The Case for Elizabeth Warren. The former front-runner is still the best candidate for Black Americans. By Julia Craven / Slate

Where most of the Democratic presidential field supported racial justice and progressive ideals in general terms, palatable to a mainstream audience, Warren offered a platform specifically and explicitly designed to aid Black Americans in overcoming the consequences of racism. Alleviating inequality, particularly as experienced by Black people, was at the root of Warren’s policy proposals, in a way few of her well-meaning opponents could match. Read more

Related: The woman Biden should pick to lead us to calmer days. By George Will / Wash Post

The number of young people of color living in the Midwest has surged over the past decade, as the older white population has nearly stalled. Forty percent of the nation’s counties are experiencing such demographic transformations — a phenomenon fueling the Black Lives Matter protests that have swept the country and forced racial reckonings in communities, colleges and corporations nationwide. Read more

Racism in care leads to health disparities, doctors and other experts say as they push for change. By Tonya Russell / Wash Post

The protests over the deaths of black men and women at the hands of police have turned attention to other American institutions, including health care, where some members of the profession are calling for transformation of a system they say results in poorer health for black Americans because of deep-rooted racism. “Racism is a public health emergency of global concern,” a recent editorial in the Lancet said. “It is the root cause of continued disparities in death and disease between Black and white people in the USA.” Read more

Related: CDC: Covid-19 death toll is twice as high among people of color under age 65 as for white Americans. By Lena H. Sun / Wash Post

Who were those people who served in the riskiest studies for the first vaccine against a new virus? Sociologist Jill A. Fisher does ask, in her new book, Adverse Events, and the answers she gets from first-in-human test subjects show how systemic anti-Black racism in the United States maintains the clinical trials industry and how the industry circles back to hold people of color disproportionately in positions of economic precarity. Read more

In-depth look at the lack of diversity in mental health professionals. By Kate Snow / NBC News

Could This City Hold the Key to the Future of Policing in America? By Joseph Goldstein and Kevin Armstrong / NYT

As officials across the United States face demands to transform policing, many have turned to a small New Jersey city that did what some activists are calling for elsewhere: dismantled its police force and built a new one that stresses a less confrontational approach toward residents who are mostly Black and Latino. Read more

What the ‘black-on-black crime’ fallacy misses about race and gun deaths. By Shirley Carswell / Wash Post

My social media timelines of late have been filled with outrage over the police killings of unarmed black citizens, but after a violent Fourth of July weekend around the nation that left several children dead, I noticed an uptick in snarky posts asking: “What about black-on-black crime? Why aren’t you protesting about that?” Read more

McGirt asks whether a significant swath of land covering the eastern half of the state of Oklahoma is part of what federal law anachronistically refers to as “Indian country” — that is, Native American reservations where tribal governments retain considerable sovereign authority. The holding of McGirt is that this land, which has 1.8 million residents, most of whom are not Native American, is reserved land. Oklahoma must honor a treaty from nearly two centuries ago setting aside this land for Native peoples. Read more

A racial reckoning arrived at West Point, where being black is a ‘beautifully painful experience.’ By Alex Horton / Wash Post

More times than she can count, Mary Tobin walked the verdant grounds of the U.S. Military Academy past Lee Barracks dormitory, named in honor of Robert E. Lee, the Confederate general who killed thousands of U.S. soldiers. But the traitor symbology didn’t end there, or at the paintings and names etched on plazas. Tobin, who is black, was assigned to inspect the living quarters of fellow cadets during her junior year, a responsibility given to rising leaders. In one dorm room, a white male classmate hung a Confederate flag on a wall to get a reaction. She yanked it down and handed it back without showing emotion, she recounted. Read more

I’m a black CEO. I’ve been discounted on Wall Street because of my skin color. By Eddie C Brown / Wash Post

I was raised in the Jim Crow South, when the railroad tracks separated whites from blacks and African Americans were considered second-class citizens.  I began my investment career as the first African American portfolio manager at T. Rowe Price in 1973, not because of some quota or the good graces of white executives, but because the meritocratic model made me visible and managers were supportive. After 10 years in the business, I became an entrepreneur. Read more

Joy Reid, who rose to television fame as a sharp critic of President Trump and commentator on liberal politics and race, will become the host of a new nightly show on MSNBC, the network announced on Thursday, placing her among a handful of Black women to anchor an American evening news program. Read more

The Kennedy Center and its resident opera and orchestra will commission composers and librettists from around the country to respond to local racial crimes and violence as part of an effort to promote anti-racism. Read more

Lots of people, especially many Native Americans, loathe the name of the Washington, D.C., NFL team, the Redskins. “The origin of that name is rooted in murder and violence and genocide and hate,” says Crystal Echo Hawk, the founder and CEO of the advocacy group IllumiNative. “It’s a dictionary-defined racial slur, full-stop.” Read and listen here