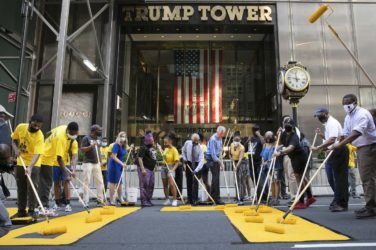 Featured – How Black Lives Matter Could Reshape the 2020 Elections. By Charlotte Alter / Time

The last few weeks have illustrated the power of the rising racial-justice movement in the wake of Floyd’s death. In less than a month, the protests have shifted public opinion on systemic racism, toppled high-profile executives and gathered momentum in their quest to defund police departments. The next few weeks and months will test whether the movement can translate its social and cultural might into political power. New York Mayor De Blasio joins protesters in painting giant ‘Black Lives Matter’ mural in front of Trump Tower. Read more

First Comes Police Reform. Then Comes Everything Else. By Adam Harris / The Atlantic

People protest to signal that they are fed up with the status quo. But protest is rarely singularly focused. People are in the streets this summer over the murder of George Floyd, but the current racial reckoning in America goes far beyond lethal policing. People are in the streets because Black students are five times more likely than white students to attend highly segregated schools. Because Black unemployment is regularly twice the white unemployment rate. Because racist housing policies have locked Black families into unequal neighborhoods and out of the prospect of building wealth. Read more

Trump Snaps ‘So Are White People’ When Asked Why Black People Are Killed By Cops. By David Moye / HuffPost

Related: ‘Trump is a singular danger’: The president faces unprecedented opposition — from his own party. By Seema Mehta / LA Times

Pandemic, Protests Cause Racism to Resonate as a Public Health Issue. By Joseph P. Williams / US News

SPURRED BY WEEKS OF street protests sparked by the killing of George Floyd – and amid the fast-moving, potentially deadly coronavirus pandemic that has ravaged Black and Hispanic communities – officials across the country are calling out racism as a public health crisis. In Wisconsin, for example, Gov. Tony Evers last month declared that “inaction, indifference and institutional racism has harmed generations of black and brown Wisconsinites.” In Maryland, the Montgomery County Council followed suit, adopting a resolution stating that racism – “a root cause of disparities and inequities” – is a public health problem warranting action. Read more

Related: The Return of Jane Elliott: Before anti-racist reading lists and Instagram allyship, white people were presented with the “Blue Eyes, Brown Eyes” exercise. Its 86-year-old creator can’t believe she’s still being asked about it. By Brianna Holt / NYT

The office of Georgia Republican Gov. Brian Kemp released a statement Monday instructing Atlanta residents to ignore “confusing” new restrictions put in place over the weekend by Mayor Keisha Lance Bottoms amid record-high COVID-19 infections in the city and across the state. Citing Kemp’s “reckless” reopening, Bottoms, who recently tested positive for COVID-19, had directed the city to return to Phase 1, or the most restrictive measures. Read more

Jeff Sessions Ends His Political Career in a Blaze of Racism. By Pema levy / Mother Jones

Racism defined Sessions’ entire career, but racism is not what ended it. In fact, it was Trump’s patronage that put Sessions and the white grievance he long embodied at the center of American politics. Sessions’ political career is over now because he realized too late that Trumpism isn’t just about the worldview; it’s also about Trump himself, a cult of loyalty that Sessions ran afoul of before it was clear how easily Trump cast people aside. Read more

The University of Mississippi began taking down a 30-foot Confederate statue Tuesday, more than a year after students, faculty and staff elected to remove the monument from the heart of the school’s campus. Read more

As Washington’s professional football team retires a team name, a curator at the National Museum of the American Indian talks about our attachment to Native American imagery. “It’s spooky, weird and subversive,” Paul Chaat Smith, a curator who created the exhibition with Cécile R. Ganteaume, said of the profusion of Native imagery. “We wanted to make the point that this is part of American life, going back 300 years, since before the founding,” he said. “From Paul Revere to Kanye West, why does this never go out of style?” Read more

Related: From the Aunt Jemima rebrand to the Redskins name change, how sports teams and companies are leaving their racist branding behind. By Allegra Frank / Vox

In an extraordinary move, the Asheville City Council has apologized for the North Carolina city’s historic role in slavery, discrimination and denial of basic liberties to Black residents and voted to provide reparations to them and their descendants. The 7-0 vote came the night of July 14. “Hundreds of years of Black blood spilled that basically fills the cup we drink from today,” said Councilman Keith Young, one of two African American members of the body and the measure’s chief proponent. “It is simply not enough to remove statutes. Black people in this country are dealing with issues that are systemic in nature.” Read more

Black deaths matter: The centuries-old struggle to memorialize slaves and victims of racism. By Vicki Daniel / The Conversation

The fight to remember those killed by violence has roots in the history of slave cemeteries and burial practices. The enslaved were often limited in their choice of burial grounds, especially on rural Southern plantations. White owners relegated their cemeteries to marginal land that could not be cultivated. Many burials were marked only with a wooden post. Read more

Revisiting “A Time for Burning” and the Spiritual Crisis of Racism. By Richard Brody / The New Yorker

The film, shot in 1965, is centered on William Youngdahl, the minister of Augustana Lutheran Church, in Omaha, Nebraska, which has an all-white congregation. Youngdahl seeks to facilitate contact between his congregation and local Black churchgoers. He invites teen-agers from the nearby, all-black Calvin Memorial Presbyterian Church to join one of his services. Read more

The flurry of Black Lives Matter statements from Hollywood studios, networks and media conglomerates has attracted criticism from people within and outside the industry pointing to the dismal track record many of these companies have with regard to honestly valuing inclusion. Audiences can see the lack of diversity in front of the camera for themselves, but it doesn’t take much digging to discover an overall lack of people of color in decision-making positions behind the camera, whether on set or in executive offices. Among the major networks CBS has long been perceived as a top offender in this regard. But on Monday morning the network publicly stated its commitment to changing that image. Read more

The Revolutionary Life of Paul Robeson: Scholar Gerald Horne on the Great Antifascist Singer, Artist and Rebel. By Jeremy Scahell / The Intercept Podcast

This week on Intercepted: As Trump vows to smash leftist movements, we take a comprehensive look at the life of the revolutionary Black socialist, anti-fascist, and artist Paul Robeson. University of Houston historian Gerald Horne, author of “Paul Robeson: The Artist as Revolutionary,” discusses Robeson’s life from his early years to his time in Europe on the brink of a fascist war. The son of an escaped slave, Robeson rose to international fame as a singer and actor, but committed himself to the liberation of oppressed people across the globe and was a tenacious fighter for the freedom of Black people in the U.S. Read and Listen here

When Marian Anderson Defied the Nazis. By Kira Thurman / The New Yorker

If Americans know one fact about the legendary African-American contralto Marian Anderson, it’s that she sang in defiance on the steps of the Lincoln Memorial, in 1939. But that performance was not Anderson’s first time confronting anti-Black racism in such a spectacular manner that she made international news. Throughout the nineteen-thirties, Anderson stared down opposition in Nazi Germany and Fascist Austria. Read more

NBA legend Kareem Abdul-Jabbar addressed anti-Semitism in the sports world and Hollywood in a new column for The Hollywood Reporter. In his piece, he questioned why in the midst of the Black Lives Matters movement, there has not appeared to be much outrage against anti-Semitic messages that several prominent celebrities have shared online. Instead, running contrary to social justice, he described the response to anti-Semitism as “meh-rage.” Read more

Related: The Anti-Semitism We Didn’t See. By Jemele Hill / The Atlantic

From the time Biles began training in Houston with her longtime coach, Aimee Boorman, as an 8-year-old, she and her family took a different path. Biles’ story is proof that, contrary to the Karolyis’ dictates, there is another way to win. Now, in partnership with the 30 for 30 podcast “Heavy Medals: Inside the Karolyi Gymnastics Empire,” we present an oral history of how Biles’ unique journey to becoming the world’s greatest gymnast helped her claim her power, find her voice and change the sport. Read more

Tina Turner comes out of retirement with a remix of ‘What’s Love Got To Do With It?’ By Marianne Garvey / CNN

Tina Turner is back with a remix of her classic hit, “What’s Love Got To Do With It?” Turner worked with Norwegian producer DJ Kygo on a remix of the song. Kygo last year made a remix of Whitney Houston’s cover of “Higher Love,” which hit the Billboard Hot 100 chart. Kygo announced the news on Instagram, including a picture of himself with Turner, writing that the song will be available on Friday. Read more