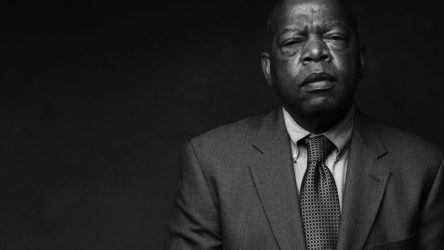 Featured – The Essential and Enduring Strength of John Lewis. By Jelani Cobb / The New Yorker

By the time John Lewis made his exit from this realm, on Friday, his life had been bound so tightly and for so long to the mythos of the movement for democracy in America that it was difficult to separate him from it. Read more

Related: How We Remember a Prophet. By Rev. Dr. William J. Barber II / The nation

For the Rev. C.T. Vivian, a jail cell was about as familiar as a police officer’s fist. For his work during the height of the civil rights movement, the minister and activist was arrested more times than he cared to count and suffered several brutal beatings at the hands of officers throughout the South. All the while, he held fast to one principle: “In no way would we allow nonviolence to be destroyed by violence,” he recalled in an oral history recorded in 2011. Read more

Who Were the Freedom Riders? By Derrick Bryson Taylor / NYT

Representative John Lewis was among the 13 original Freedom Riders, who encountered violence and resistance as they rode buses across the South, challenging the nation’s segregation laws. The Freedom Rides took place as the Civil Rights movement was gathering momentum, and during a period in which African-Americans were routinely harassed and subjected to segregation in the Jim Crow South. Read more

We Need to Begin Again. In the midst of a moral reckoning, America needs a third founding. By Eddie S. Glaude, Jr. / The Atlantic

The United States has confronted two crucial moments of moral reckoning where we faced the daunting challenge of beginning again; both times we failed. The first was during the Civil War and Reconstruction, which constituted a second founding for the country. The second was the Black-freedom struggle of the mid-20th century. What we need now is a third American founding. We need an America where “becoming white” is no longer the price of the ticket. Instead, we should set out to imagine the country in the full light of its diversity and with an honest recognition of our sins. Read more

Donald Trump is what you get when childhood is a zero-sum competition for the approval of “a high-functioning sociopath” whose values are expressible in dollars and cents. He is what happens when a boy is allowed to bluff, brag and bully his way through life, no one ever tells him No and everyone acts as if his waste products are without odor. He is what’s left when you subtract compassion, accountability, humility and the ability to laugh at yourself. Read more

Donald Trump has unified America – against him. By Robert Reich / The Guardian

Donald Trump is on the verge of accomplishing what no American president has ever achieved – a truly multi-racial, multi-class, bipartisan political coalition so encompassing it could realign US politics for years to come. Unfortunately for Trump, that coalition has come into existence to prevent him from having another term in office. Read more

Related: Desperate, Trump and the Republicans will try to win by declaring war on the cities. By Amanda Marcotte / Salon

At least six investigations into discriminatory mortgage loan “redlining” have been halted or stalled — against staff recommendations — under the Trump administration’s Office of the Comptroller of the Currency. Read more

The Pentagon, without once mentioning the word “Confederate,” announced a policy on Friday that essentially banned displays of the Confederate flag on military installations around the world. Read more

Joe Biden’s VP Could Be the Most Powerful Ever. By Christian Paz / The Atlantic

If Joe biden wins in november, his running mate could become the most consequential vice president in modern American history. The woman Biden picks could be seen as a potential president-in-waiting, a signal for the Democratic Party’s agenda in the years to come, and perhaps the most significant player trying to help Biden manage a country—and a federal government—in crisis. Read more

After George Floyd’s death, protests in Louisville, Ky., erupted as they did in the rest of the country. But in Louisville, people were mostly chanting a different name – Breonna Taylor, the 26-year-old emergency medical technician who was shot and killed at her home in the city by the police during a no-knock warrant. Read more

Related: I’m a Black Police Officer. Here’s How to Change the System. By David Hughes / NYT

A black man accused of rape, a white officer in the Klan, and a 1936 lynching that went unpunished. By Michael S. Rosenwald / Wash Post

The lynching began with a knock on the door. It was 3 a.m. on Sept. 12, 1936, a steamy late summer morning in Atlanta. Thomas Finch and his family were sound asleep. Then, the knocking. When Finch’s father opened the front door, he found five white men standing there: two police officers and three other burly men the family had never seen before. “We want your son Tom,” an officer said. Finch got dressed and went with the officers. An hour later, he was dumped outside Grady Hospital, where he worked as an orderly. His face was pummeled. He was shot multiple times. Read more

What is ‘Strike for Black Lives’ and when is it? By Jonathan Vanian / Fortune

Thousands of union workers on July 20 are expected to participate in Strike for Black Lives, a protest intended to put a spotlight on racism and police brutality. The strike is being organized by Service Employees International Union (SEIU), which represents nearly 2 million service workers. Mary Kay Henry, the international president of the SEIU, told Fortune that the strike is intended to highlight the economic plight of service workers, many of whom are people of color. Read more

When I spoke out about systematic oppression, the Republican response was vicious. By Illhan Omar / Wash Post

This past week, I met with community members and state lawmakers to push for more change in the wake of George Floyd’s killing in Minneapolis. Floyd was killed in my Minnesota district — and his death was the catalyst for conversations around police brutality and structural racism that have begun to transform the nation. Read more

The Supreme Court all but guaranteed that nearly 1 million Floridians will be unable to vote in the 2020 election because of unpaid court debts in a shattering order handed down on Thursday. Its decision will throw Florida’s voter registration into chaos, placing a huge number of would-be voters in legal limbo and even opening them up to prosecution for casting a ballot. The justices have effectively permitted Florida Republicans to impose a poll tax in November. Read more

MSNBC’s Zerlina Maxwell on “The End of White Politics.” By Dean Obeidallah / Salon

Zerlina Maxwell wants “white politics” to be a thing of the past. Before some people get upset by that, Maxwell doesn’t mean that white people won’t be elected to high office in the future. As Maxwell explains in her new book, “The End of White Politics,” it simply means with our nation’s changing demographics, politics will increasingly reflect what America looks like today—not the 1950s. Read more

Why racism can have long-term effects on children’s health. By A. Pawlowski / Today

Dr. Nia Heard-Garris was startled when her 4-year-old son came home from preschool one day and declared, “Mommy, sometimes I’m white.” As a pediatrician who studies the impact of racism on children’s health and the mother of a Black boy with caramel skin, she carefully inquired further. He told her one of his friends said he only played with white kids. “He just told the boy, ‘OK, I’m white today then.’ This kid was fine with that answer and let him play,” Heard-Garris, a pediatrics researcher at the Feinberg School of Medicine at Northwestern University in Chicago, told TODAY. Read more

Sylvia’s, a soul food restaurant on Malcolm X Boulevard in Harlem, New York, saw a welcome bump in donations and revenue from new customers in early June following calls to “buy Black” after the death of George Floyd. But the increase didn’t help the 58-year-old landmark restaurant turn a profit. The coronavirus pandemic has limited its operations, forcing the Harlem staple to lay off most of its staff and slash revenues. Read more

A federal judge has denied Netflix’s second motion to dismiss a race and gender discrimination lawsuit from comedian Mo’Nique, who alleges in the suit that the $500,000 the streaming service offered her in 2017 for a standup special “wreaked of discrimination” and “perpetuated the pay gap suffered by Black women” and that her business dealings with Netflix “ended with a blacklisting act of retaliation.” Read more

Black Artists on How to Change Classical Music. By Zachary Wolfe and Joshua Barone / NYT

With their major institutions founded on white European models and obstinately focused on the distant past, classical music and opera have been even slower than American society at large to confront racial inequity. Black players make up less than 2 percent of the nation’s orchestras; the Metropolitan Opera still has yet to put on a work by a Black composer. Read more