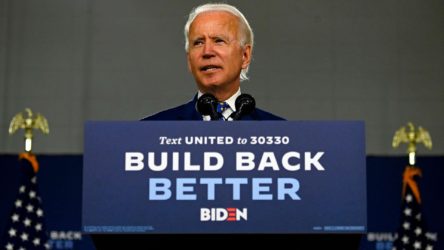 Joe Biden on Tuesday unveiled an ambitious plan to combat racial inequality in the United States that focuses on providing assistance to minority small-business owners and making housing more affordable for families of color, while also lambasting President Donald Trump for “intentionally stoking the flames of division of racism.” Read more

Related: A young mayor takes on inequality in HBO’s ‘Stockton On My Mind.’ By Soraya Nadia McDonald / The Undefeated

John Lewis remembered in his own words / NBC News

As his body lies in state inside the U.S. Capitol, audio is played of John Lewis’ 2014 Emory commencement speech where he spoke about his upbringing in Alabama and leadership in the civil rights movement. Listen here

The Christian denomination in which I grew up was founded on the proposition that slavery could flourish alongside the gospel of Jesus Christ. Its founders believed that this arrangement was not just possible, but divinely mandated. Yet many white Christians, like myself, came of age in churches and communities where we seldom heard anything substantive or serious about the white-supremacist roots of our faith. Read more

Related: Finding the women of the White nationalist movement. By Brandon Tensley / CNN

Related: America’s national greatness myths are shattering. Can they survive? Should they? By David Rothkopf / USA Today

Politics at the point of a gun. Conservative armed groups move into politics as backlash builds against protests, stay-at-home orders. By Joshua Partlow / Wash Post

Unlike the old image of militiamen as fringe elements motivated by a desire to overthrow the federal government, these groups often rally in defense of the president and see themselves as pro-government allies of local law enforcement. Read more

Why Cornel West is hopeful during the pandemic and anti-racism protests. By Sigal Samuel / Vox

West and I talked about some potential tools for dealing with white supremacy and Covid-19. We discussed Black liberation theology, which took off in the 1960s and emphasized that God’s primary concern is for people who are being oppressed. West is a Christian who’s steeped in that theology. But West is also steeped in a bunch of secular philosophical traditions — from Marxism to existentialism to pragmatism — so I asked him what those traditions can teach us about how to handle our current crises. We covered questions like: Is the pandemic weakening or strengthening white supremacy? What’s the difference between optimism and hope — and why does West say he’s not optimistic but is hopeful? Listen here

We Should Have a Handle on This by Now.’ As Inner-City Neighborhoods See a Surge in Gun Violence, These Are the Changes Community Leaders Say They Need. By Josiah Bates / Time

Historically, inner-city neighborhoods and marginalized urban communities across the United States face gun violence rates much higher than statistical norms. In many of these communities, gun violence has increased in the aftermath of George Floyd’s killing in Minneapolis, and the widespread protests against police brutality and racial injustice that followed. Since Memorial Day — the day Floyd was killed — more than 113 people have been shot in Minneapolis. New York City has had over 800 shooting victims in 2020, compared to 481 in the same period last year. Read more

Urban planning as a tool of white supremacy – the other lesson from Minneapolis. By Julian Agyeman / The Conversation

The legacy of structural racism in Minneapolis was laid bare to the world at the intersection of Chicago Avenue and East 38th Street, the location where George Floyd’s neck was pinned to the ground by a police officer’s knee. But it is also imprinted in streets, parks and neighborhoods across the city – the result of urban planning that utilized segregation as a tool of white supremacy. Read more

Kentucky Attorney General Daniel Cameron is set to make history twice in less than a year. The first time came in November 2019, when he became the first Black person to be elected to statewide office in Kentucky as a stand-alone candidate. The second time is likely just around the corner, when he decides whether to prosecute the Louisville police officers who killed Breonna Taylor, a 26 year old medical worker who was shot during a no knock police raid. Mitch McConnell helped guide his career. President Donald Trump had taken to calling him a “star.” Read more

Jaime Harrison is chasing Lindsey Graham like a cheetah running down an impala. By Jonathan Capehart / Wash Post

In American politics, some candidates give their opponents a real run for their money. And then there are those candidates who lay chase like a cheetah running down an impala on the Serengeti. Two polls out of South Carolina show that Sen. Lindsey O. Graham (R) is the impala to the cheetah that is Democratic challenger Jaime Harrison. Read more

Trevor Noah on Monday took aim at Sen. Tom Cotton (R-Ark.) for his “possibly stupidest” argument against teaching about America’s history of slavery in schools. Cotton has been the subject of fierce criticism over his attempts to prevent schools from teaching the 1619 Project, a New York Times-based curriculum that seeks to reframe American history around 1619 ― the year slaves first arrived on America’s shores. Watch here

House votes to approve the creation of a National Latino Museum. By Patricia Guadalupe / NBC News

Many Americans may not know there are Hispanic families in the Southwest who trace their roots to the 16th century—or that before Brown vs. Board of Education, a Mexican-American family challenged school segregation in Méndez vs. Westminster. Having a place where visitors can learn about U.S. Latino history—and how it’s a part of American history—may be one step closer to happening. The U.S. House of Representatives voted Monday to approve legislation that would create a national Latino museum in the nation’s capital. The initiative had wide bipartisan support and passed unanimously by voice vote. Read more

Related: Latinos can be racist too. My community shows how. By Lizette Alvarez / Wash Post

When it comes to congressional oversight of our military, the U.S. has a serious diversity problem. By Brian Greer / Wash Post

As protests continue in cities across the U.S., people have hit the streets to protest systemic racism and police brutality. Many Asian Americans have joined in that action, but are also trying to figure out how they fit into the larger national conversation about racism. Some are protesting for the first time ever. Others are confronting their own anti-Blackness and that within their communities. (On this episode, we spoke to a young Korean American man who falls into that category.) Then, of course, there are the people who have been organizing and demonstrating for years. Listen here

Leaders of historically Black colleges and universities are grappling with a challenge others in higher education don’t fully share: how to reopen their campuses to a population that has proven especially vulnerable to Covid-19. Black people are dying at 2.5 times the rate of white people, according to the Covid Racial Data Tracker. And nearly a third of deaths among nonwhite Americans were in people younger than 65, according to data from the Centers for Disease Control and Prevention, compared with 13 percent among white people under that age. Read more

‘Watchmen’ leads all Emmy nominees with 26. By Lynn Elber / PBS

“Watchmen,” cloaked in superhero mythology and grounded in real-world racism, received a leading 26 nominations Tuesday for the prime-time Emmy Awards. The series, which captured America’s unease as it faces racial clashes amid a pandemic, was nominated as best limited series and received bids for cast members including Regina King and Jeremy Irons. Read more

If you’re hoping to watch Beyoncé’s Black Is King visual album online, there’s only one place to do it. The new film premieres this Friday, July 31st and is streaming exclusively on Disney+. Black Is King is based on the music of The Lion King: The Gift, Beyonce’s album inspired by Disney’s live-action version of The Lion King, which featured the singer as the voice of Nala. One of the most highly-anticipated releases of the summer, Black Is King arrives just over a year after The Lion King premiered in theaters. Watch here

Bubba Wallace is By Himself, Again. By Jamil Smith / Rolling Stone

Despite his support for the Black Lives Matter movement, Wallace insisted to me that he didn’t see this as him entering the left-right political fray. “I still don’t see it as being political,” he says. “I just see it as basically right versus wrong.” Here, watch Wallace and I discuss the noose, Arbery, heavy metal, and the NASCAR fans who now feel welcome at the races. Listen here

As part of the NFL’s ongoing commitment to social justice programs, the messages “It Takes All of Us” and “End Racism” will be stenciled on all end zone borders for home openers, the league office informed clubs on Monday in a memo obtained by ESPN. The two messages of inclusion, which will be stenciled on opposite end zones during kickoff week, are key elements of the league’s broader, multifaceted rollout intended to highlight efforts to support diversity and inclusion when the new season begins. Read more

With the NBA focused on social justice, White coaches say they’re stepping off the sidelines. By Candace Buckner / Wash Post

As the NBA returns more than four months after it was dramatically shut down by the novel coronavirus pandemic, its attention is firmly on racial inequality. The courts are painted with the message “Black Lives Matter.” Many players will wear social justice messages on the back of their jerseys. Miami Heat all-star Jimmy Butler said he doesn’t want his last name on his jersey, to show he is “no different than any person of color.” Meanwhile, at Pierce’s urging, previously reluctant White coaches are considering how to pace the sidelines as allies. Read more

John Donaldson, a Black Baseball Great, Still Not in the Hall of Fame. By Mary Pilon and Travon Free. NYT

Most baseball fans have probably never heard of John Donaldson, a hard-throwing pitcher who drew sold-out crowds around the country for an astonishing three decades before he hung up his glove in 1941. His statistics establish him as one of the greatest to ever play America’s pastime. Yet he died in obscurity. Now, Donaldson’s towering contributions to the Negro Leagues are being slowly resurrected after decades of racial injustice and institutional neglect. Read more