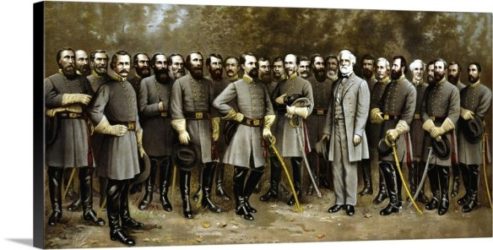 In November, 1989, when the Berlin Wall suddenly began to crumble and then fall, much of the world watched in awe. Could it be true that Communism was about to collapse? Confederate monuments in America likewise reduced to pieces, relics of the collapse, after a hundred and fifty-five years, of the public vestiges of the Lost Cause tradition. The summer of 2020, like the autumn of 1989, could mark the death of a specific vision of history. If so, it has taken a long, long night—to borrow from Robbie Robertson and the Band—to drive old Dixie down. Read more

Related: The Story Behind the Lee Statue in Richmond, Virginia. By Peter Rachleff  / The Progressive

Related: Both namesakes of Washington and Lee University perpetrated racial terror. The school should be renamed. By Brandon Hasbrouck / Wash Post

As the 21st century dawned, liberal democracy seemed virtually unassailable, at least as an idea. Then, two decades later, authoritarians were looking like the trend-setters and democrats the holdouts. “The liberal idea has become obsolete,” declared Russian President Vladimir Putin as leaders gathered for the 2019 G-20 summit in Japan. Then came the murder of George Floyd. In the wake of other high-profile killings of Black Americans by the police, the tragedy ignited the most significant social uprising in the United States since the 1960s and sparked kindred protests around the world. Read more

As Donald Trump gave his race-baiting speeches over the Fourth of July weekend, hoping to rile his base and jump-start his flagging campaign for re-election, I was forced to recall the ranting of a Columbia University sophomore that caught the nation’s attention in 2018. In the video, a student named Julian von Abele exclaims, “We built the modern world!” When someone asks who, he responds, “Europeans.” Read more

Related: Donald Trump Listens to His Gut. And It’s the Gut of a Racist. David Corn / Mother Jones

Nine out of 10 Americans say racism and police brutality are problems, poll finds. By David Smith / The Guardian

The US president has been criticised for relentlessly stoking white fear and grievance in recent weeks, putting him at odds with Black Lives Matter anti-racism protests that have swept the nation following the police killing of George Floyd in Minneapolis in May. But the Opinium survey of 2,000 US adults, conducted for the Guardian between 19 and 24 June, suggests that Trump is out of sync with the mood across the political spectrum. Read more

Related: Is This The Beginning Of The End Of White-Centric Identity Politics In America? By Emma Gray / HuffPost

Related: Say Her Name: How The Fight For Racial Justice Can Be More Inclusive Of Black Women. By Mary Louise Kelly and Heidi Glenn / NPR

The fight to unseat Sen. Lindsey Graham (R-S.C.) is still an uphill battle—but it is also, at least, an incredibly well-funded one. Jaime Harrison, Graham’s Democratic challenger, announced Tuesday morning that he had raised $13.9 million dollars between April 1 and June 30. It is the most money any Senate candidate in South Carolina, of either party, has raised in a single quarter—breaking a record Harrison set himself just last quarter with his $7.3 million haul. Read more

Civil rights leaders are still fed up with Facebook over hate speech. By Shirin Ghaffary / Vox

Civil rights leaders are fed up with Facebook. They say the company still allows too much racist, hateful, and violent content to spread on its social media network — and that company executives gave PR “spin” rather than meaningful solutions in a meeting on Tuesday about these issues. Read more

The Fullest Look Yet at the Racial Inequity of Coronavirus. By Richard A. Oppel Jr., Robert Gebeloff, K.K. Rebecca Lai, Will Wright and Mitch Smith / NYT

Early numbers had shown that Black and Latino people were being harmed by the virus at higher rates. But the new federal data — made available after The New York Times sued the Centers for Disease Control and Prevention — reveals a clearer and more complete picture: Black and Latino people have been disproportionately affected by the coronavirus in a widespread manner that spans the country, throughout hundreds of counties in urban, suburban and rural areas, and across all age groups. Read more

With the November election four months away, polling shows Biden’s support with younger Black voters trailing significantly behind that of older Black voters. And while polls show the majority of young Black voters support Biden over President Donald Trump, many are unenthusiastic at best or hesitant at worst. Read more

Why U.S. Schools Are Still Segregated — And One Idea To Help Change That. By Alisa Chang and Jonaki Mehta / NPR

In 1954, the Supreme Court ruled in Brown v. Board of Education that racial segregation in schools was unconstitutional. The decision is often framed as a landmark decision that transformed education for Black students, allowing them equal access to integrated classrooms. But more than six decades later, segregation in American schools is still very much a reality, says Rebecca Sibilia, founder of EdBuild, a nonprofit that investigated school funding inequities in America. Her team found that predominantly white school districts get collectively $23 billion more per year than predominantly nonwhite school districts.  Read more

What to read, listen to and watch to learn about institutional racism. By Isabella Isaacs-Thomas / PBS

Talking with some of the voices featured on the PBS NewsHour, as well as sharing some of our own recommendations, we’ve compiled a list of things for you to read, listen to and watch that might illuminate your understanding. This list is just a starting point. Read more

Related: ‘The 1619 Project’ to Be Adapted for Film and TV Content. By Tonja Renee Stidhum / The Root

University Of California Will Have Its First Black President. By Sarah Ruiz-Grossman / HuffPost

To review, on the off chance that you, New York reader, are not up on your NASCAR: Bubba Wallace is the only Black full-time driver in the notoriously good ol’ boy world of American auto racing.  Wallace is the best thing they have going right now. Wallace isn’t standing against his league’s wishes and values: He’s representing them. That Trump does not realize this — that he thinks Wallace can in fact be his new Kaepernick — shows how truly lost he is right now, how little skill he apparently has to read a room anymore. Read more

Super Bowl-winning quarterback Patrick Mahomes has agreed to a historic $500 million contract extension with the Kansas City Chiefs, his agency announced Monday.Steinberg Sports announced the 10-year, half-billion-dollar deal on Twitter. Mahomes’ agreement is worth $503 million, with $477 million in guarantee mechanisms and a no-trade clause. Mahomes is now “the first half billion dollar player in sports history,” according to the agency. Read more

Isiah Thomas Discusses His Journey From NBA Champion To Champagne To Cannabis. By Javier Hasse / Forbes

NBA champion, Hall of Famer and cannabis entrepreneur Isiah Thomas was recently appointed CEO and Vice Chairman of the Board of Directors of the publicly traded, Colombian hemp and cannabis producer One World Pharma, replacing the company’s founder, Craig Ellins. Read more