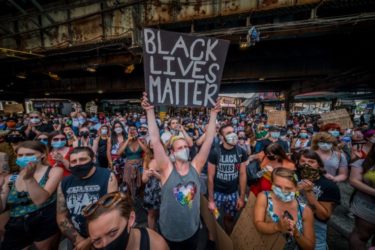 For all that’s good about America, something is rotten. The protesters in Lafayette Park on June 1 may have been galvanized by the disturbing video of the murder of George Floyd, suffocated to death beneath the knee of a Minneapolis police officer just a week prior. But at the core of their movement is much more than the outrage over the latest instances of police brutality. Centuries of racist policy, both explicit and implicit, have left black Americans in the dust, physically, emotionally and economically. Read more

Related: Will This Be The Moment Of Reckoning On Race That Lasts? By Ron Elving / NPR

I thought I understood issues of race. I was wrong. By David Axelrod / Wash Post

I used to think I was aware and sensitive on matters of race. I was wrong. Despite my work, I was too often oblivious — or at least inattentive — to the everyday mistreatment of people of color, including friends and colleagues, in ways large and small. Read more

American apartheid: This country still treats too many of its black citizens like slaves. By Lucian K. Truscott IV / Salon

Related: The Civil Rights Act of 2020. Feel-good gestures from politicians and the police shift no power. Real change lies within a system overhaul. By Charles M. Blow / Wash Post

Trump stokes division with racism and rage – and the American oligarchy purrs. By Robert Reich / The Guardian

Trump is the best thing ever to have happened to the new American oligarchy, and not just because he has given them tax cuts and regulatory rollbacks. He has also stoked division and racism so that most Americans don’t see CEOs getting exorbitant pay while slicing the pay of average workers, won’t notice giant tax cuts and bailouts for big corporations and the wealthy while most people make do with inadequate schools and unaffordable healthcare, and don’t pay attention to the bribery of public officials through unlimited campaign donations. The only way systemic injustices can be remedied is if power is redistributed. Power will be redistributed only if the vast majority – white, black and brown – join together to secure it. Which is what the oligarchy fears most. Read more

Related: Trump might go down in history as the last president of the Confederacy. By Eugene Robinson / Wash Post

As the people rise up, Trump regime moves to criminalize dissent. By Chauncey DeVega / Salon

Trump and the right wing’s lies about antifa legitimates violence against Trump’s political enemies. The logic is simple: To support Donald Trump is to love America. Anyone who stands against Donald Trump or otherwise opposes him is, by definition, a member of antifa and a “terrorist.” It is good and right that terrorists are to be subjected to violence and ultimately destroyed to keep America “safe.” Read more

The diabolical irony of Trump in Tulsa. By Michele L. Norris / Wash Post

Perhaps a better date, but still the wrong venue. But he is still plowing ahead with a rally in Tulsa, the wrong city for a “Make America Great Again” event in this incendiary moment for our country. Tulsa was the site of one of the most vicious acts of racial violence in U.S. history. In 1921, an angry white mob attacked homes and businesses in a thriving community known as “Black Wall Street,” killing some 300 people and leaving thousands homeless. Read more

The Rev. Lenny Duncan is a black preacher in the Evangelical Lutheran Church in America, one of the nation’s whitest Christian denominations. As nationwide protests have forced white Americans to talk about race, Duncan’s longtime advocacy within the church has become all the more relevant. In his book Dear Church: A Love Letter From a Black Preacher to the Whitest Denomination in the US, Duncan writes: “Jesus is Trayvon Martin, armed only with a bag of Skittles and an iced tea against an entire world that would rather hang him from a tree than love him. Until we see this, we are lost.” Read more

Amid a worldwide uprising against police brutality and racism, we discuss the historic moment with legendary scholar and activist Angela Davis. She also responds to the destruction and removal of racist monuments in cities across the United States; President Trump’s upcoming rally on Juneteenth in Tulsa, the site of a white mob’s massacre of Black people; and the 2020 election, in which two parties “connected to corporate capitalism” will compete for the presidency and people will have to be persuaded to vote “so the current occupant of the White House is forever ousted.” Listen here

Related: This city disbanded its police department 7 years ago. Here’s what happened next. By Scottie Andrew / CNN

Related: Instead of ‘defund’ the police, imagine a broader role for them with public health. By Leana S. Wen / Wash Post

The Fulton County District Attorney criticized the police officers’ handling of the fatal shooting of Rayshard Brooks in Atlanta on Friday and said that a decision on whether to bring charges could come around Wednesday. “(Brooks) did not seem to present any kind of threat to anyone, and so the fact that it would escalate to his death just seems unreasonable,” DA Paul Howard told CNN’s Fredricka Whitfield on Sunday. “It just seems like this is not the kind of conversation and incident that should have led to someone’s death.” Read more

In late May, director Ava DuVernay tweeted a clip of Tye Anders, a 21-year-old black man in Texas, lying on the ground, terrified and in tears, as police stood over him with guns drawn. He had allegedly run a stop sign. “Can anyone identify these cops for me?” she asked. “I’m starting a new project.” Now DuVernay, whose acclaimed 2019 “When They See Us” miniseries documented the lives of the five teenagers wrongly imprisoned in the 1989 Central Park jogger case, is revealing that project, meant to spotlight police officers who have abused and murdered black people. Read more

Mayor Marty Walsh on Friday declared racism a public health crisis in Boston. To tackle the emergency, Walsh said he will reallocate $3 million of the department’s overtime budget to public health. Walsh said the decision comes after he listened to Black people — both in the Black Lives Matter movement and in his life — who shared with him “how racism shapes lives and hurts communities.” Read more

How the First Black Mayor of St. Paul, Minnesota, Is Thinking About This Moment. By Joel Anderson / Slate

“I think it is just absolutely clear beyond a shadow of a doubt that a public safety framework that is just police, prisons, and prosecutors doesn’t work.”  On Wednesday afternoon, I talked to Carter on the phone. During our conversation, which has been edited for length and clarity, we discussed his earlier efforts at police reform in St. Paul, his family history with the police, and his group text with black mayors across the country. Read more

Take the Confederate Names Off Our Army Bases. By David Petraeus / The Atlantic

It is time to remove the names of traitors like Benning and Bragg from our country’s most important military installations. As I have watched Confederate monuments being removed by state and local governments, and sometimes by the forceful will of the American people, the fact that 10 U.S. Army installations are named for Confederate officers has weighed on me. That number includes the Army’s largest base, one very special to many in uniform: Fort Bragg, in North Carolina. Read more

Related: Trump may not be ready to take Confederate names off Army bases, but the Army is. By Fred Kaplan / Salte

House Speaker Nancy Pelosi on Wednesday called for the removal of statues of Confederate soldiers and officials from the U.S. Capitol as reignited conversations about the nation’s treatment of racial minorities have once again brought the monuments’ history into question. In an open letter to the Joint Committee on the Library, Pelosi asked Congress to “lead by example” and remove 11 Confederate statues from the Capitol. Read more

Related: A Flag for All in Mississippi. What if the state could create a new heritage? By Beth Ann Fennelly / NYT

As protests continued in the nation’s capital on Wednesday, preparations are underway for an estimated 100,000 people to converge on Washington in late August to push for criminal justice reform. The family of George Floyd, who was killed in the custody of Minneapolis police last month, and the Rev. Al Sharpton outlined plans for the event — to coincide with the 57th anniversary of the March on Washington — in a permit application filed with the National Park Service. Read more

Among the candidates who have progressed to the point of more comprehensive vetting or have the potential to do so are Sen. Kamala D. Harris (D-Calif.), Rep. Val Demings (D-Fla.), former national security adviser Susan E. Rice and Atlanta Mayor Keisha Lance Bottoms, all of whom are black. Sen. Elizabeth Warren (D-Mass.), who is white, is also in that group, as is New Mexico Gov. Michelle Lujan Grisham, who is Latina. Read more

Despite massive problems at the voting booth, Democratic turnout in Georgia’s primaries skyrocketed — with three times as many votes cast in the Senate primary as in 2016. The Democratic turnout was also higher than it was in the gubernatorial primary in 2018, which saw 550,000 ballots cast. Read more

Related: LeBron James Is Fighting For Black Voting Rights With ‘More Than A Vote’ Initiative. By Dominique Mosbergen / HuffPost

Dave Chappelle released a sober reflection on racist police brutality in America Thursday night via Netflix’s comedy hub on YouTube. The half-hour performance marked one of Chappelle’s first filmed public appearances since winning a Grammy for the album of his controversial 2019 Netflix special Sticks and Stones.  Watch here