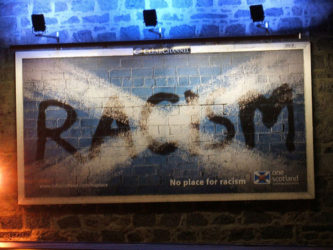 Featured – The Psychology of Racism: Racism is a sign of a lack of psychological maturity and integration. By Steve Taylor / Psychology Today

Racism is a symptom of psychological ill-health. It is a sign of a lack of psychological integration, a lack of self-esteem and inner security. Psychologically healthy people with a stable sense of self and strong inner security are not racist, because they have no need to strengthen their sense of self through group identity. They have no need to define themselves in distinction to — and in conflict with — others. Read more

Related: America’s psychologists want you to understand how racism holds our country back. By Melissa Healy / LA Times

Related: How 2 Lives Collided in Central Park, Rattling the Nation. The inside story of the black birder and the white woman who called the police on him. Their encounter stirred wrenching conversations about racism and white privilege. By Sarah Maslin Nir / NYT

A brief history of the “Lost Cause”: Why this toxic myth still appeals to so many white Americans. By Bob Cesca / Salon

One of the most dominant prongs of the Lost Cause was the characterization of Blacks as a common enemy of both northern and southern whites. Mythologists believed that if white people were fighting Black people, then white people wouldn’t fight each other again. The goal of smearing African Americans as the enemy of white America involved the whole-cloth fabrication of cultural myths about African Americans, emerging at the dawn of the 20th century and beyond. Architects of the mythology felt that Black people didn’t possess a cultural identity and therefore identities could be entirely invented for them by white supremacists. Read more

What the Bible Has to Say About Black Anger. The Psalms are not silent about the rage of the oppressed. By Esau McCaulley / NYT

The videos are a reminder that the issue was never about a lack of evidence. They reveal the lengths to which those in power will go to avoid facing the truth. What is happening in those videos is a manifestation of systemic racism — and to acknowledge that would call into question the system that benefits the powerful. When these videos stack one upon another and are added to our personal slights, a deep unsettling anger rises in the soul of a disinherited and beleaguered people. James Baldwin said, “To be a Negro in this country and to be relatively conscious is to be in a rage almost all the time.” Read more

Related: An Insatiable Rage. It is an everyday struggle to neither fall into despair nor explode in anger. By Charles M. Blow / NYT

Donald Trump has preyed on the American psyche like a demon. At last the exorcism has begun. By Dan Froomkin / Salon

You can almost hear Americans saying: “This is not who we are.” And that is hopeful. Breathtakingly hopeful. Black Lives Matter has gone from being a radical slogan to being a simple fact. And the protests are about more than just police violence, as New York Times opinion columnist Jamelle Bouie wrote last week: Read more

One of America’s worst acts of racial violence was in Tulsa. Now, it’s the site of Trump’s first rally in months. By Emily Stewart / Vox

Mass demonstrations have erupted across the country in reaction to George Floyd’s death and in protest of systemic racism and police violence. During this period of unrest, America just marked the anniversary of one of its worst incidents of racial violence — and President Donald Trump is headed to the site of the incident for his first campaign rally in the midst of the coronavirus pandemic. Read more

Related: Watchmen’ Writer on Trump in Tulsa, Racism, and Police Brutality. Cord Jefferson discusses how the HBO series predicted our country’s ugly current moment by mining its past. By Alan Sepinwall / Rolling Stone

The new report, released Tuesday, focuses just on the dozen years of Reconstruction itself. The organization has documented more than 2,000 lynching victims in that time, a rate of killing far higher than the decades that followed, and a toll that the report itself acknowledges is likely thousands below the true figure. Many of the lynchings differed from those in the Jim Crow years, when jeering white crowds would gather for public hangings. But the violence was as grotesque, the pretexts as absurd and the motive — the assertion of white supremacy — just as clear. Read more

Trevor Noah tried to make sense of the fatal police shooting of Rayshard Brooks on “The Daily Show” Monday. He distilled what he said was one truth about the circumstances in the high-profile police killings of Brooks and numerous other Black people. Watch here

The swift decision on Sunday to fire the white Atlanta police officer who shot and killed a black motorist intensified the growing re-examination of the use of deadly force by the police, challenging longstanding principles that have given law enforcement officers wide latitude in cases in which an encounter ends with a death. Read more

5 years after Charleston was rocked by the Mother Emanuel church shooting, the pain lingers. By Marco della Cava / USA Today

“Black fatigue with all this is very real, because in truth that forgiveness they showed was a deep spirituality borne out of the ancestral legacy of slavery that was necessary to navigate white America,” says Starks, whose firm BCS & Associates consults with companies and law enforcement on social justice matters. “The bottom line is, we haven’t yet changed the policies or practices or procedures for Black people to feel comfortable,” he says. “But the country is now listening. There’s a different ear to the ground.” Read more

The End of Black Politics. Black leaders regularly fail to rise to the challenges that confront young people. By Keeanga-Yamahtta Taylor / NYT

Young black people have exploded in rebellion over the grotesque killing of George Floyd. We are now witnessing the broadest protest movement in American history. And yet the response of black elected officials has been cautious and uninspired. The Congressional Black Caucus offered a familiar list of the kind of police reforms that have failed for decades to end police violence. Read more

Related: Biden and Trump Are Fighting Each Other in a Changed World. Neither man anticipated the leftward tilt of the electorate in 2020. By Thomas B. Edsall / NYT

University of California votes to restore affirmative action nearly 24 years after it was outlawed. By Alaa Elassar / CNN

The University of California has voted to restore affirmative action in hopes of diversifying its student body. The unanimous decision was reached by the school’s Board of Regents on Monday, nearly 24 years after it was outlawed by Proposition 209, which banned the consideration of race and gender in admissions in California. Read more

Related: Harvard students of color: Removing affirmative action would be a loss for everyone.  By Kimmy Yam / NBC News

Related: A School Admissions Process That Caused Segregation Fell Apart in Weeks. The coronavirus has led to the collapse of New York’s usual admissions system, and protests against racism have highlighted entrenched division.  By Eliza Shapiro / NYT

Reed Hastings, the founder of Netflix, is giving $120 million to black colleges like Spelman and Morehouse. By Theodore Schleifer / Vox

Netflix founder Reed Hastings is making the single biggest donation, by a couple or an individual, to racial justice in the aftermath of the killing of George Floyd, putting $120 million into America’s historically black colleges and universities (HBCUs). Read more

Marvin Gaye’s “What’s Going On” is one of the most famous songs of all time, but those who watch Spike Lee’s new war film Da 5 Bloods will hear it in an entirely new way: stripped of soothing and soulful orchestration, leaving only the late singer’s pristine voice, echoing slightly. It’s almost ghost-like, singing of bygone pain renewed—and that’s exactly why the filmmaker chose it for his Netflix war drama. Read more