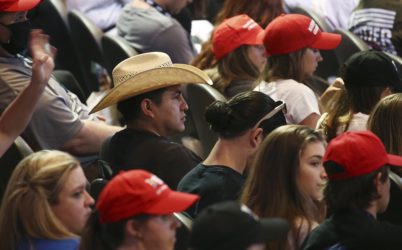 President Trump, who ostentatiously refuses to wear a mask himself, is actively defying public health experts — holding his political rallies in Phoenix and Tulsa, inside arenas, subverting the importance of testing and saying that Americans who cover their faces do so to spite him. In framing mask-wearing as a culture-war issue, Mr. Trump obscures and impugns what should be a straightforward and responsible act of personal protection and public hygiene. Read more

Trump Is Promising Four More Years of Strife. He can’t run on accomplishments. So he’s running on violence and fear. By William Saletan / Slate

On Saturday night in Tulsa, Oklahoma, President Donald Trump tried to relaunch his reelection campaign. This was his chance, after the onslaught of the novel coronavirus and three months without a campaign rally, to tell Americans what he would do in a second term. The election, he argued, was about defeating an array of enemies: anarchists, journalists, Democrats, and “millions and millions of illegal aliens.” But the common theme was enmity itself. Trump can’t run on four more years of prosperity. So he’s running on four more years of strife. Read more

Related: Trump wanted a packed house in Tulsa and street violence outside — 0 for 2. By Amanda Marcotte / Salon

Dr. Martin Luther King’s daughter, Bernice King,  delivered a powerful speech at Rayshard’s funeral —  this after friends and family delivered remarks as well — and she says his death will NOT be in vain, going on to call on protests for Black Lives Matter to continue until the movement’s demands are met and true justice is achieved. Watch here

On the worst day of her life, Samaria Rice made lunch – turkey sandwiches and fruit cups – for her two youngest children. She gave her son Tamir and daughter Tajai money to walk to the neighborhood store for snacks. Rice, a mother of four, got dressed to go to the grocery store. She planned to buy the ingredients to cook lasagna that night. Then a knock came at her door. A group of neighborhood children were saying 12-year-old Tamir had been shot by a police officer at the park across the street. “I told them boys they didn’t know what they were talking about,” Rice said. At the park, at least 10 police officers were surrounding Tamir, who was lying on the ground. They stopped her from going near her son. She could see his body only through their legs. Read more

On June 23, 1982, a Chinese-American engineer named Vincent Chin died in a Detroit hospital. Four nights earlier, Chin, 27, had been celebrating his bachelor party at a topless bar when two white autoworkers mistook him for being Japanese and accused him of stealing their jobs. “It’s because of you motherf—— that we’re out of work,” they reportedly told him before bludgeoning his skull with a baseball bat. His last words, according to witnesses, were: “It’s not fair.” Read more

White Southerners, our souls are at stake. We must speak up now. By Joanna Adams / CNN

As a child growing up in Mississippi in the 1950s, I thought nothing about race. I knew no Black people, other than the janitor at my school and our maid, Omera, whom I loved but whose last name I never knew. One day, Omera told my mother that she and her family were moving to Detroit. It sounded like Mars to me. I cried. Omera and I hugged as we said goodbye. As we watched her walk to the bus stop down the street, Mother turned me around and said, “Jo, I know you love Omera, but I don’t want you ever again to hug a ‘Negra’. It’s just not done.” Read more

Related: White Americans Say They Are Waking Up to Racism. What Will It Add Up To? By Amy Harmon and Audra D. S. Burch / NYT

The argument began as soon as Charlie Mai and his brother, Henry, announced their plans to attend a Black Lives Matter protest that evening in D.C. Their father was not having it. Glenn Mai, a retired FBI agent, had been raised in Dallas by Chinese immigrants who had taught him that he would succeed if he just worked hard. “Chinese culture is very much about working within the system,” Glenn, 54, said, and during decades in law enforcement, he’d come to believe the system worked. Read more

Monuments, statues and a national reckoning on racial injustice. By Judy Woodruff / NPR

Related: There is no earthly reason this nation should be defiled by Confederate statues.  Tear them all down .By Eugene Robinson / Wash Post

Related: Theodore Roosevelt statue will be removed from the front steps of the Museum of Natural History. By Ganesh Setty and Hollie Silverman CNN

Related: A monumental shift. Memorials to white supremacy are falling. What will replace them? By Christine Emba / Wash Post

COVID-19 on the Rise in 29 States; Immigrant and Communities of Color Carry Brunt of Devastation. By Democracy Now

A new study out of Harvard confirms the virus continues to disproportionately hit Black and Latinx communities, highlighting the risk to younger people. Latinx people aged 35 to 44 have a mortality rate nearly eight times higher than white people, while Black people in the same age group have a mortality rate nine times higher than white people. This comes as another study on the economic impacts of the coronavirus reveals around half of New York City’s immigrants are now unemployed due to the pandemic. Read more

Related: The U.S. is falling behind its peers. Americans — if not their leaders — are starting to notice. By Catherine Rampell / Wash Post

Related: Protests on race and injustice should make us look at how the Ivy League enables inequality.  By Gayle Tzemach lemmon / NBC News

America’s segregated schools: We can’t live together until we learn together. By Stefan Lallinger / USA Today

Would George Floyd be alive today had he and Derek Chauvin grown up together and attended the same schools? It’s an impossible question to answer, but it’s an important one to ask — in part because it’s about more than George Floyd and Chauvin, the Minneapolis police officer who knelt on Floyd’s neck for nearly nine minutes as he pleaded for his life, or even the criminal justice system. It’s a question at the heart of race relations in America today. Read more

Ben Crump has become the go-to attorney for racial justice: ‘I feel like I’m running out of time.’ By Karen Heller / Wash Post

Crump is an attorney of our times, as much a creature of the green room as the courtroom. In a nation lousy with lawyers, he has become the go-to advocate for families whohavelost relatives to police brutality, as though his is the only name on the list. He accomplished this by being fluent in the language of the church, tort law, racial inequality and what he deems “the mediasphere,” paired with an indefatigable drive to be everywhere. Read more

How Recommendations Of An Obama Task Force Have, And Haven’t, Changed U.S. Policing. By Becky Sullivan / NPR

The police killings of George Floyd, Breonna Taylor and others — and the wave of protests that followed — have sparked a national conversation about how to prevent police killings and improve relationships between law enforcement and the communities they police. Six years ago, police shot and killed Michael Brown in Ferguson, Mo., sparking a similar conversation. As a result, President Obama convened a panel of experts, activists, authors and academics to rethink policing in America. Read more

The State Department Was Designed to Keep African-Americans Out. By Christopher Richardson / NYT

Since the protests over the killing of George Floyd, the State Department has been rocked by internal debates, Zoom calls and discussions on how to tackle its lack of diversity. It is no secret that the American foreign service has long been dominated by white males. Most diplomats dismiss this as a regrettable consequence of a difficult examination process or a lack of interest from members of minority groups. But the State Department’s failure to attract black applicants is not by chance. It is by design. U.S. diplomats today inherit a racist system that was designed to keep African-Americans out. Read more

The Black Female Battalion That Stood Up to a White Male Army. By Christina Brown Fisher / NYT

The unit was set up to determine the value black women brought to the military. They ultimately ran the fastest mail service in the European Theater during World War II. As the newly created 6888th Central Postal Directory Battalion, their mission was neither glamorous nor particularly thrilling. The work would be grueling, the hours long, and what little sleep they were allotted would be prone to interruption by air raids. Progress would be measured by the depletion of undelivered mail they had been summoned to England to sort out. With the war now at its bloody peak, mail was indispensable for morale, but delivering it had become a towering logistical challenge. . Read more

The mighty swings NASCAR took this week — a moment of pause for the African American community at Atlanta Motor Speedway, the announcement of its participation in the You Can Play Pride Auction benefiting LGBTQ+ communities and the prohibiting of the Confederate flag at all events — were, collectively, a tremendous first step toward a more inclusive product. Though some could suggest it smacks of profitable virtue signaling, it’s a truly bold move, given the sport’s predominately white audience. Read more

LeBron James’s Business Partner Now Wants to Get Out the Vote. By David Gelles / NYT

When LeBron James began building his business empire, he didn’t turn to a professional talent agency or an established Hollywood manager. He went to his childhood friend Maverick Carter. The two grew up together in Akron, Ohio, and were basketball and football teammates in high school. Mr. Carter interned at Nike after college, and began looking after Mr. James’s business interests in 2006. This month, Mr. James and Mr. Carter announced the formation of a political organization, More Than a Vote, which is focused on turning out the vote and combating voter suppression. Read more

Mattis, along with Urooj Rahman, 31, was arrested in New York City on May 30 during protests against racism and police brutality following the death of George Floyd at the hands of Minneapolis police officers. The two were charged with attempting to burn an unoccupied, already damaged New York City Police Department vehicle. Nobody was injured in the incident. Now Mattis and Rahman face additional federal charges that carry a 45-year mandatory minimum sentence, and up to life in prison — for what essentially amounts to property damage. Read more

Hal Singer was a toddler when a white mob descended on Tulsa’s all-black community of Greenwood and burned his home to the ground. Now 100 and ailing after a stroke, Singer, a renowned jazz band leader and saxophonist, is among the last survivors of the 1921 Tulsa race massacre, one of the worst episodes of racial violence in American history. Read more