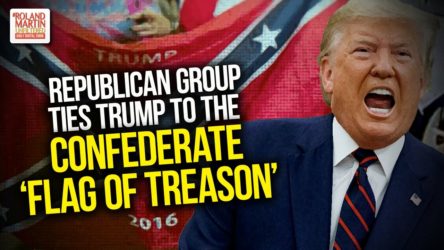 The anti-Trump Republican group, The Lincoln Project, is planning to air a new attack ad blasting President Donald Trump’s record on race relations in the US (Read more). The TV spot, backed by a $500,000 ad buy, will air in the key battleground states of Florida, Wisconsin and Michigan as well as in Washington, DC. The ad, entitled “Flag of Treason,” targets the support Trump has received from white nationalist groups. Watch here

The Question Isn’t Whether Trump Will Go Full Authoritarian—It’s How We’ll Respond. By Elie Mystal / The Nation

Yesterday evening, President Donald Trump ordered mounted units of the National Guard and US Park Police to march on a peaceful gathering of his fellow citizens. Those units, unprovoked, launched tear gas at the retreating protesters. The assault was carried out live on television. As we learned shortly after, the constitutional rights of the citizens and press were violated so the president could pose for a picture while waving a Bible outside St. John’s Episcopal Church. Read more

Related: What Is the Insurrection Act That Donald Trump Wants to Invoke? By David Cohen / Rolling Stone

Related: A nationwide police riot: Is our outrage about “violence” pointed at the real perpetrators? By Andrew O’Hehir / Salon

Novelist and screenwriter Aleksandar Hemon on the “magnitude of catastrophe” facing America. By Chauncey DeVega / Salon

In a recent article for the Intercept, Bosnian-born novelist Aleksandar Hemon — also the co-writer of the forthcoming “Matrix” sequel — warns that the United States is careening towards ethnic violence, civil war and self-destruction under Donald Trump. The “most important and troubling symptom,” he writes, is the rising atmosphere of conflict “meant to culminate in transformative, cathartic violence; this marks the beginning of collective self-actualization.” Hemon continues: Read more

Related: Destructive Power of Despair. The protests are not necessarily about Floyd’s killing in particular, but about the savagery and carnage that his death represents. By Charles M. Blow / NYT

Related: Trump Takes Us to the Brink. Will weaponized racism destroy America? By Paul Krugman / NYT

We are the governed. We no longer consent to let the police kill us. By Eugene Robinson / Wash Post

This coast-to-coast uprising is not about terrorism, foreign or domestic. It’s not about arson, looting or carpeting streets with broken glass. It’s about a powerful phrase in the Declaration of Independence: “the consent of the governed.” Police in this country no longer have our consent to kill African Americans unjustly and with impunity. Is that clear now? Read more

Related: Bryan Stevenson on the Frustration Behind the George Floyd Protests. By Isaac Chotiner / The New Yorker

U.S. protesters rallying against the killing of George Floyd and countless other black Americans are being heard around the world as demonstrators launched their own protests in the countries such as the United Kingdom, Germany, Canada, Iran and New Zealand. Read more

Robin DiAngelo, the author of “White Fragility: Why It’s So Hard for White People to Talk About Racism,” doesn’t mince words. “I actually don’t think that most white people care about racial injustice. I really don’t,” she says. Listen Here

Related: How Minneapolis, One of America’s Most Liberal Cities, Struggles With Racism. By John Eligon and Julie Bosman / NYT

‘I Believe That Better Is Possible’: A Conversation With Stacey Abrams. By Gabriel Debenedetti / New York Magazine

Stacey Abrams expects more from our elected leaders, immediately. Abrams, the former Georgia House minority leader, 2018 Democratic gubernatorial candidate, and voting-rights advocate, wants to take on qualified immunity and repeal “stand your ground” laws and for officials to create space for the “unfettered rage that needs to be met and addressed,” not condemned. And Abrams, who is under consideration to be former vice-president Joe Biden’s running mate, also wants you to understand that Donald Trump “does not care about black people and does not care about American values,” she tells New York. Read more

The American Nightmare. To be black and conscious of anti-black racism is to stare into the mirror of your own extinction. By Ibram X. Kendi / The Atlantic

“Nothing is more clearly shown from this investigation than that the southern black man at the time of emancipation was healthy in body and cheerful in mind,” Frederick Hoffman wrote in Race Traits and Tendencies of the American Negro. “What are the conditions thirty years after?” Hoffman concluded from “the plain language of the facts” that black Americans were better off enslaved. They are now “on the downward grade,” he wrote, headed toward “gradual extinction.” Hoffman’s Race Traits helped legitimize two nascent fields that are now converging on black lives: public health and criminology. Read more

Related: The Price We Have Paid for Not Confronting Racism. We will remain trapped in a cycle of anger and hopelessness until more white Americans come to grips with our past. By Mitch Landrieu / NYT

White instigators to blame for mayhem in some protests, local officials say. By Stanley-Baker / Wash Post

“What did I tell you?” a voice cried out as the camera recording mayhem in downtown Pittsburgh settled on a white man, clad in all black, smashing the windows of a police vehicle. “It is not black people,” the onlooker called to the crowd before addressing the vandal directly: “What are you doing?” Read more

US racial inequality in 6 stark charts. By Tami Luhby / CNN

The nationwide protests following the death of a black man, George Floyd, at the hands of white police officers has once again shone a spotlight on the long-standing racial divide in the US. This, along with the coronavirus pandemic that has disproportionately killed black Americans, has drawn renewed attention to the persistent inequities in wealth, health and opportunity between blacks and whites despite economic prosperity of recent years. Read more

Related: Black workers losing jobs at twice the rate of white workers during the pandemic, according to new Fortune data. By Lance Lambert / Fortune

The George Floyd Election. How the protests come to be viewed may determine who the next president is. The way that will play out could surprise us. By Thomas B. Edsall / NYT

Could the demonstrations that have devolved into mayhem, looting and assault lead to victory for President Trump? Will they empower Republicans in the way that Richard Nixon used his “silent majority” and Ronald Reagan invoked the idea that “the jungle is always there, waiting to take us over” to propel themselves politically in the wake of the riots and rebellion in Watts, Newark and Detroit in the 1960s? Read more

The civil unrest rocking the country in the wake of George Floyd’s death under the knee of a Minneapolis police officer has many catalysts. Among the more immediate is President Donald Trump and his first attorney general, Jeff Sessions, who freed local police departments from federal oversight and signaled that police brutality was no longer a problem that the federal government had an interest in solving. For police officers and departments with histories of terrorizing people rather than building relationships with communities they are supposed to protect, that message was heard loud and clear. Read more

Related: Justice Is About More Than the Killing of George Floyd. Police must take collective responsibility for the failings within their ranks. By Brandon del Pozo / NYT

Obama urges young black people to ‘feel hopeful even as you may feel angry’ after George Floyd’s death. By MJ Lee and Dan Merica / CNN

Former President Barack Obama on Wednesday personally thanked protesters in the streets across the nation following the death of George Floyd, and urged young African Americans to “feel hopeful even as you may feel angry” because he feels change is coming. In a hopeful speech, Obama said that the significant events over the last months, including the protests over the killing of Floyd and the ongoing coronavirus pandemic, represent “the kinds of epic changes … in our country that are as profound as anything I have seen in my lifetime.” Read more

The NFL’s Amnesia Is Just Like America’s.  When the league had the opportunity to be on the right side of history, it chose the coward’s path. By Jemele Hill / The Atlantic

On Saturday, National Football League Commissioner Roger Goodell had the nerve to put out a statement extending condolences to the families of George Floyd, Breonna Taylor, and Ahmaud Arbery—three African Americans who were killed by people who claimed to be enforcing the law. The league, Goodell insisted, was “committed to continuing the important work to address these systemic issues together with our players, clubs and partners.” Read more

Spike lee has premiered a new short film amid the nationwide protests over the death of George Floyd. The short, titled “3 Brothers — Radio Raheem, Eric Garner, and George Floyd,” cuts together climactic footage from Lee’s 1989 masterpiece “Do the Right Thing” with real-life viral footage capturing the deaths of Eric Garner and George Floyd. Lee uses the scene from “Do the Right Thing” in which Radio Raheem (Bill Nunn) is strangled to death by white police officers. Read more and watch here