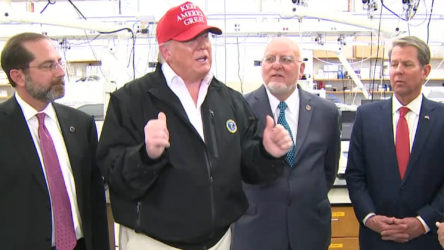 Do you have a nagging medical concern? A rash that won’t go away? Unexplained hearing loss? Are you currently bleeding out from a severed femoral artery? Well, fret no more. America now has a leading medical expert — some say the best — who will dispense diagnoses and prognoses to all — for free! This bold new telemedicine initiative, “Ask Dr. Trump,” will be offered on an unpredictable but highly frequent basis to all Americans (whether they like it or not). Read more

With Coronavirus, ‘Health Care for Some’ Is a Recipe for Disaster. By The Editorial Board / NYT

Proponents of closed borders and small social safety nets have a tendency to highlight the tension between citizen and noncitizen, to imply or explicitly state that the only way to help one group is to deprive the other. But the truth is, people on both sides are hanging by a thread. Infectious diseases, especially those like Covid-19, have a knack for penetrating and exposing such false dichotomies. Read more

Black voters know what they want. On Tuesday, it was Joe Biden. Here’s why. By Janell Ross and Dartunorro Clark / NBC News

Tyson, 58, was one of millions of black Super Tuesday voters key to former Vice President Joe Biden’s victory in 10 of the 14 states holding primaries that day. Tuesday’s sweeping win mirrored Biden’s strong showing just days earlier in South Carolina’s primary, in which many black voters described him as the practical choice, not necessarily their first choice. “I think he has direct knowledge of the president’s seat,” Tyson said. “We don’t need anyone going into the White House behind this mess that Trump has created, practicing and trying to get it together. It’s like trying to make a cake. There’s a certain kind of cook, like my grandmama, who could come in, taste the mix and tell you exactly what was missing. Biden knows the recipe.”Read more   Also see,  Why Southern Democrats Saved Biden

America’s black billionaires have no place in a Bernie Sanders world. By Colbert I. KIng / Wash Post

Don’t quite know how to break the news to Oprah Winfrey, Michael Jordan, Robert F. Smith, David Steward and Shawn Carter, a.k.a. Jay-Z. But if Bernie Sanders makes it to the White House, they had better pack their bags and head for the hills. That’s because Winfrey, Jordan, Smith, Steward and Jay-Z, the five richest black people in America, are among the 607 Americans who landed on Forbes’s annual billionaires list. The very thought of that list seems to sicken Sanders. “There should be no billionaires,” he flatly declared in a tweet last fall. Read more  Also see, Sanders Is Behind With Black Voters. He Didn’t Fix That in Flint.

How Working-Class Life Is Killing Americans, in Charts. By David leonhardt and Stuart A. Thompson / NYT

When the economists Anne Case and Angus Deaton first published their research on “deaths of despair” five years ago, they focused on middle-aged whites. So many white working-class Americans in their 40s and 50s were dying of suicide, alcoholism and drug abuse that the overall mortality rate for the age group was no longer falling – a rare and shocking pattern in a modern society. But as Case and Deaton continued digging into the data, it became clear that the grim trends didn’t apply only to middle-aged whites. Up and down the age spectrum, deaths of despair have been surging for people without a four-year college degree. Read more

The Candidate Fighting To Save Coal Country From Mitch McConnell. By Travis Waldron / HuffPost

In January, Charles Booker ― a 35-year-old Democratic state legislator from Louisville and one of the youngest Black state lawmakers ever elected in Kentucky ― entered the Democratic primary against Amy McGrath, a retired Marine fighter pilot and former congressional candidate. The winner will face Mitch McConnell, the Senate majority leader who is chasing his seventh term in the upper chamber. Read more

The Census Bureau is rolling out a new algorithm intended to protect respondents’ privacy — but experts warn the change will significantly miscount minority communities and rural areas. Specifically, the Census Bureau plans to use a new “differential privacy” algorithm to obscure respondents’ identities, yet state experts warn that the data could result in population errors of 25 percent or more and misrepresent certain groups by 100 percent or more. This would have dramatic results on redistricting and funding. Read more

The apparent refusal of President Trump’s Justice Department to engage in any meaningful, public enforcement of the Voting Rights Act has taken Republicans’ general hostility to the law to a whole new level. The DOJ has not filed a single new Voting Rights Act case since the Trump administration took over — setting it apart from the last several administrations, Republican and Democratic. Read more

Liverpool council’s decision in January 2020 to contextualise streets named after slave traders shed important light on the town’s infamous history as one of the world’s largest slave trading ports. Between 1696 and 1807 – when Britain abolished its slave trade – Liverpool merchants forcibly transported a phenomenal 1.3 million enslaved Africans across the Atlantic. Of these men, women, and children, 180,000 perished on the deadly Middle Passage – the crossing from Africa to the Americas. Read more

Virginia Confederate monuments: ‘We’re going to hold hands on this journey as brothers and sisters.’ By Laura Vozzella / Wash Post

State Sen. Mamie E. Locke took to her feet, ready to tangle with the freshman Republican who had just called a bill to allow the removal of Confederate monuments “divisive and not healing.” “What was divisive and not healing,” the veteran Hampton Democrat, Black Caucus member and college professor began, “was the erection of monuments that were not necessarily erected immediately following the Civil War. . . . They were erected as symbols of hatred. They were erected as symbols of Jim Crow.” Read more

After 120 years, 200 failed bills and at least 4,742 lives taken between 1882 and 1968, the House of Representatives voted last week, 410 to 4, to pass historic legislation that finally makes lynching a federal crime.  Some people may say better a century too late than never, or they may regard this bill as a necessary act of historical remembrance. But when I think of the dead — especially the untold numbers of child victims, and the two men in my own family lynched at the hands of persons unknown — I can’t see this bill as anything but, at best, an empty symbolic gesture. Read more

Her sister, 14-year-old Addie Mae, and three other black girls died in the explosion, shaming the nation and leading to the passage of the 1964 Civil Rights Act.  26 shards of glass pierced Rudolph’s slight, 12-year-old body, destroying the vision in her right eye and her dreams of becoming a nurse. Now this gentle, indomitable woman became known as the “Fifth Girl,” a survivor of a notorious American hate crime who few knew existed until, at 49, has begun to share her story. Read more

McCoy Tyner, a pianist whose deep resonance, hammering attack and sublime harmonic invention made him a game-changing catalyst in jazz and beyond, died Friday, March 6, at his home in New Jersey. His death was confirmed by his manager. No cause of death was given. He was 81. Tyner was the last surviving member of the John Coltrane Quartet, among the most momentous groups in jazz history. Few musicians have ever exerted as much influence as a sideman. His crucial role in the group’s articulation of modal harmony, from the early 1960s on, will always stand as a defining achievement: The ringing intervals in his left hand, often perfect fourths or fifths, became the cornerstone of a style that endures today. Read more  Also see, When We Celebrate John Coltrane, We Celebrate McCoy Tyner, Too.

Black students say they are being penalized for their hair, and experts say every student is worse off because of it. By Leah Asmelash / CNN