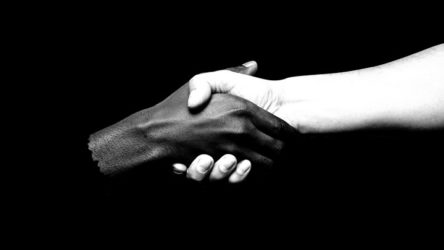 Featured – The Coronavirus Was an Emergency Until Trump Found Out Who Was Dying. By Adam Serwer / The Atlantic

The coronavirus epidemic has rendered the racial contract visible in multiple ways. Once the disproportionate impact of the epidemic was revealed to the American political and financial elite, many began to regard the rising death toll less as a national emergency than as an inconvenience. Temporary measures meant to prevent the spread of the disease by restricting movement, mandating the wearing of masks, or barring large social gatherings have become the foulest tyranny. Read more

Related: Nearly Every Social Distancing Arrest in New York City Has Been a Person of Color. By Elliot Hannon / Slate

White People Are Demanding Their Lives Back In States Where Black People Are Losing Theirs. By Edwin Rios and Sinduja Rangarajan / Mother Jones

Of the 15 states with the widest disparities between the Black share of the population and the Black share of COVID deaths, nine have reopened or are reopening soon: Missouri, Kansas, South Carolina, Alabama, Georgia, Mississippi, Tennessee, and North Carolina. Of those, seven are run by Republican governors. Just one state with a Republican governor, Maryland, has refused to reopen. Read more

Related: For many cautious African Americans, the move to reopen America is not a ‘black friendly’ campaign. By Nick Charles / NBC News

A black lawmaker came to Michigan’s capitol with an escort of armed black citizens on Wednesday, days after white protesters with guns staged a volatile protest inside the state house, comparing the Democratic governor’s public health orders to “tyranny”. The state representative Sarah Anthony, 36, said she wanted to highlight what she saw as the failure of the Michigan capitol police to provide legislators with adequate security during the protest, which saw demonstrators with rifles standing in the legislative chamber above lawmakers. Read more

Related: Watch “Inside the largest African-American gun group: “I’m not goin’ down without a fight”” on YouTube

The staggering job losses sparked by the coronavirus pandemic are rippling across lines of gender, class and race. But it is women, people of color and the young who are bearing the brunt of the crisis. The U.S. shed 20.5 million jobs last month, an unprecedented number that led to a record high unemployment rate of 14.7%. But Friday’s report from the Department of Labor revealed that while the unemployment rate for whites reached 14.2% in April, a historic high, 16.7% of African Americans were out of work and the unemployment rate among Latinos soared to 18.9%, the highest on record. Read more

The pandemic has highlighted the serious health issues that prevail in America’s Latino community — including diabetes, hypertension and obesity — as well as the social inequalities that continue to weigh on Latinos. The disparity in the extent of the damage caused by the virus is a matter of life and death for Latinos. And yet the Trump administration hasn’t appointed a Spanish-speaking official specifically to address the Latino community during the crisis, nor has it created a Spanish-language website about the virus. Read more

Related: Latino communities in the US devastated by Covid-19. By Omar Jimenez / CNN

Former President Barack Obama called the U.S. response to the coronavirus pandemic an “absolute chaotic disaster” and promised to campaign “as hard as I can” for former Vice President Joe Biden in a call Friday with 3,000 people who served in his administration. Read more

Trump’s desperate hours: He was contemptuous of the virus — now it has him trapped. By Lucian K. Truscott IV / Salon

These Are the Voters Who Could Decide the Election. By Stephanie Valencia / NYT

The stars are aligned for 2020 to be a breakout year for the political participation of the Latino community, the largest minority group in the electorate at 32 million. Joe Biden will have a hard time beating Donald Trump without achieving new levels of support. But if Democrats don’t act, we predict nearly 60 percent of eligible Latino voters in battleground states will stay home. Read more

The report examines the Asian American electorate, which is made up of more than 11 million eligible voters. Among the significant findings, the research noted that the number of those voters ballooned by 139 percent in the past 20 years, making Asian Americans the fastest-growing demographic of eligible voters compared to all other major races and ethnicities. In contrast, the white electorate grew by 7 percent in the same period. Read more

“We are strongest when we work together; this includes our battle against Covid-19,” Gov Kristi Noem said. “I request that the tribes immediately cease interfering with or regulating traffic on US and State Highways and remove all travel checkpoints.” In response, Cheyenne River Sioux Tribe Chairman Harold Frazier said in a news release Friday that while he agreed it’s important to work together, “you continuing to interfere in our efforts to do what science and facts dictate seriously undermine our ability to protect everyone on the reservation.” Read more

The Killing of Ahmaud Arbery. By Charles M. Blow / NYT

The similarities here to the Trayvon Martin case are uncanny. These men stalked Arbery, projecting onto him a criminality of which he was not guilty, then used self-defense as justification to gun him down in an altercation that they provoked. Arbery was killed eight years to the month after Martin was killed, just about three hours north. Read more

Related: We Are Living in the Age of the Black-Panic Defense. By Jelani Cobb / The  New Yorker

Justice Thomas has drawn notice for asking more questions during the Supreme Court’s new pandemic-prompted system during oral arguments than he has asked for more than a decade in the courtroom, as the justices broadcast hearings for the first time in their history. Yet the public attention to his baritone-voice presence comes as the 71-year-old justice has been — more significantly — building influence for his brand of conservatism. Read more

He was black, sexually fluid and was playing the devil’s music. Little Richard terrified America in the mid-1950s, but he was the real king of rock ‘n’ roll. He flaunted convention long before The Beatles or the Stones, and redefined showmanship before Jimi Hendrix or Prince had stepped on a stage. Read more

LeVar Burton still loves reading aloud. His storytelling might be what you need right now. By Caitlin Gibson / Wash Post

LeVar Burton has been reading to children for nearly 40 years, but tonight his story is for the grown-ups. On a Friday evening in April, tens of thousands of Burton’s fans — the ones who can still sing every word of the theme song from his beloved public television program, “Reading Rainbow” — are ending another weary week of pandemic isolation. They’ve put their kids to bed, and they’re pulling out their phones or laptops, curling up on couches or crawling into bed, ready for the voice of their childhoods to carry them elsewhere for a little while. Read more

The centerpiece of the work is a grisly crime, yes—one made more compelling by the window through which it is viewed: a Native woman named Lissa Yellow Bird, who is determined to get to the bottom of the disappearance of a white oil worker, Kristopher Clarke, on the reservation. But it’s essential reading not because of the journey to get to the truth behind the crime—rather because it’s a nuanced, careful exploration of a Native community and the impact of generational trauma and violence on a family. Read more

Those familiar with the work of Damien Chazelle won’t be surprised to hear that his latest project centers on a jazz musician. “The Eddy,” a miniseries now streaming on Netflix, follows the Oscar-winning director’s “Whiplash” and “La La Land” in exploring the role music plays in the life of its main character, and how professional ambition affects his relationships, some loving and others fraught. But unlike those films, which take place in the United States, “The Eddy” follows an American in modern-day Paris: fictional pianist Elliot Udo (André Holland), now a struggling jazz club owner who becomes entangled in a crime plot. Read more

Set in the 1940s, the series envisions an alternate history for women of color in the movies. Harrier talked about what she learned from the role — and what it was like to wear those amazing clothes. Laura Harrier was in high school when she first learned about the Oscar-nominated actress Dorothy Dandridge, and she was immediately drawn to her beauty and talent. So when Ryan Murphy cast her in “Hollywood” as Camille, a 1940s starlet inspired by Dandridge, it “felt like a gift had fallen from the sky,” she said. Read more

What Was Saved. Sarah Broom’s New Orleans saga. By Lovia Gyarkye / The Nation

The Yellow House has garnered well-deserved praise; it won a National Book Award and appeared on several “best of the year” lists. More than just a narrative about a family, it is a masterpiece of personal and social history, examining the devastating consequences of decades of government neglect and revealing the very weak foundations on which the American dream rests. Using oral history, forgotten pieces of journalism, photographs, deeds, and other artifacts, The Yellow House helps to fill in those painful “silent leaps,” as Broom puts it, that fragment the history of her family and her home of New Orleans East. Read more