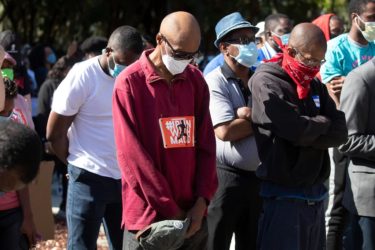 Featured – We must confront the inconsistent laws that allow black lives to be taken with impunity. By Sherrilyn Ifill / Wash Post

In his seminal work about the rise and fall of black reconstruction, W.E.B. Du Bois described in chilling detail the use of lynching two decades after the Civil War’s conclusion to control black citizenship. Black people could expect to be subjected to lynching because “they were radical; they had attempted to hold elections; [and] they were carrying arms,” but also just because, in the mind of Southern whites, “they were ‘damn ni–ers.’ ” In other words, for any reason a white supremacist could fathom. The Feb. 23 killing of 25-year-old Ahmaud Arbery demonstrates that the use of deadly violence to control black citizenship continues. Read more

Related: The Citizen’s Arrest Law Cited in Arbery’s Killing Dates Back to the Civil War. By Frances Robles / NYT

Related: Ahmaud Arbery and the Ghosts of Lynchings Past. By George Yancey / NYT

The family of Breonna Taylor, a decorated Louisville EMT who was fatally shot by police, has hired a prominent civil rights attorney with the Black Lives Matter movement in their lawsuit against three officers. Taylor, 26, was shot eight times by Louisville Metro Police officers who entered her apartment around 1 a.m. March 13. Police have said the officers were serving a search warrant as part of a narcotics investigation, but no drugs were found at the home. Read more

When lawyers in Cedric Hobbs Jr.’s 2014 death penalty trial in Cumberland County, North Carolina, began picking a jury, the pool was 50 percent black. By the time the trial began, there were only two black people on the jury. When the defense accused prosecutors of racial discrimination in the selection process, they acted indignant. “Somehow we’re just racists in this county,” one told the judge. Read more

Racism Is All Trump Has Left. By Jeet Heer / The Nation

In a press briefing on Monday, Washington Post reporter Philip Rucker tried to tease out exactly what the nebulous phrase “Obamagate” meant. “In one of your Mother’s Day tweets, you appeared to accuse President Obama of ‘the biggest political crime in American history, by far’—those were your words,” Rucker noted. “What crime exactly are you accusing President Obama of committing, and do you believe the Justice Department should prosecute him?” Trump’s response didn’t help clear up the matter. “Uh, Obamagate. It’s been going on for a long time,” Trump said. Read more

Related: Trump Is Staking Out His Own Universe of ‘Alternative Facts.’ By Thomas B. Edsall / NYT

The Hunger Pains of a Pandemic. Empty stomachs can lead to a dangerous desperation. By Charles M. Blow / NYT

Have you ever been hungry? Truly hungry? Not the hunger one gets in anticipation of a meal, but the kind that pinches the stomach when you know no food is forthcoming. It is the kind of pang you take to bed with you, the kind that greets you when you rise. It is a bitter physical deprivation that gnaws at not only the gut but the spirit. It makes you sad. It makes you angry. I grew up having to stay one step ahead of hunger. It was like running ahead of tireless hounds through a dark wood. Read more

The 1918 pandemic was linked to a rise in Nazi support. Will this pandemic be similar? By Igor Derysh / Salon

A new study by an economist at the Federal Reserve Bank of New York linked the 1918 flu pandemic to the rise in Nazi support in Germany, a finding that could have significant relevance as the United States and the world grapples with the health and economic devastation wrought by the coronavirus. Read more

Why A Historic Wave Of Latino Prosperity Is Under Threat Now. By Pallavi Gogoi / NPR

It was just a few months ago when things were looking up for Latinos. Wages were rising and unemployment had hit a record low. As the U.S. economy marked its longest expansion on record, Latino families marked better times with milestone purchases. They bought more homes than any ethnic group, including whites. Another positive: a record number of Hispanics started attending college with enrollment nearly tripling in the last two decades. Now, that historic wave of Latino prosperity appears to be at risk from the coronavirus pandemic. Read more

New PBS Series Puts Asian Americans At The Center Of Their Own Stories. By Marina Fang / HuffPost

At least 3,122 cases have been reported on Navajo Nation ― the largest and most populous American Indian reservation in the U.S. According to 2010 census data, about 173,776 people (including both Navajo and non-Navajo) live on the reservation. This means the reservation’s rate of infection is roughly 1,798 per 100,000 people. By comparison, the states with the most known cases ― New York, New Jersey and Massachusetts ― have reported 1,751 cases per 100,000 people, 1,560 cases and 1,129 cases, respectively. Read more

The case for Warren is straightforward. There are at least two major obstacles to broad, ambitious progressive reform. The first is political. You need a president who wants it, a Congress that wants it and a federal judiciary that won’t stand in the way of it. If you can overcome these hurdles — which, as you can imagine, would be incredibly difficult — then you’re left with the next obstacle: implementation. You need, in other words, state capacity — the ability to actually deliver on plans and mandates. And if there’s anyone in the Democratic Party who has thought deeply about the challenges of state capacity, administration and personnel, it’s Warren. Read more

Nicholas Johnson, a Canadian student majoring in operations research and financial engineering, has been named valedictorian of Princeton’s Class of 2020, the university announced in a news release.  “It feels empowering. Being Princeton’s first Black Valedictorian holds special significance to me particularly given Princeton’s historical ties to the institution of slavery,” Johnson told CNN via Facebook message. “I hope that this achievement motivates and inspires younger black students, particularly those interested in STEM fields.” Read more

As Stevie Wonder turns 70, a look at how he wrote the soundtrack for a fragile America. By Justin Tinsley / The Undefeated

Part of what made Wonder’s music so important was how it reflected the rising societal temperature in America, in particular black America. By the start of the 1970s, the Motown of “Baby Love” and “Bernadette” was forced to change because America had changed. The ’60s had been defined by both celebration and tragedy, from the Civil Rights Act of 1964 to the assassinations of Malcolm X and Martin Luther King Jr. But the ’70s commenced with America in recession and still fighting in Vietnam, and a diet of love songs was no longer enough. Black unemployment was nearly double that of whites and incarceration statistics began to grow rapidly, with black people twice as likely to be arrested for drug-related offenses than whites. Read more

Jill vs. Erykah. Babyface vs. Teddy: Inside the Instagram ‘battles’ that are now must-watch quarantine viewing. By Helena Andrews-Dyer / Wash Post

About halfway through the “Verzuz” Instagram contest Saturday night between neo-soul queens Jill Scott and Erykah Badu, one fan complained that the two women were being “too nice.” Wasn’t this supposed to be a battle? Badu, who spun her best-ofs while a black-and-white Bruce Lee classic played in the background, had some characteristically choice words for the disgruntled listener: This is our thing, she said. Go elsewhere if you want some musical catfight. More than 700,000 other listeners like it just fine. Read more

It was a good thing to see Tom Brady among the current and former NFL players, plus others, who signed on with the Players Coalition to demand a federal investigation into the death of Ahmaud Arbery. In the 2 ½ years since it was established, we’ve come to increasingly expect the Coalition, largely consisting of African-American players, to voice resistance to matters that involve social justice. But Brady – like most white players – typically takes a pass. What a message it sends now, however, for the NFL’s most popular figure to signify his support in this case. Read more

Scottie Pippen quit on his team, but that scene would play out differently in today’s NBA. By Ben Golliver / Wash Post

Scottie Pippen was wrong in 1994, he is still wrong today, and he will be wrong forever.Twenty-six years have passed, and the tape tells the same story: Pippen quit on the Chicago Bulls as their season hung by a thread. The Hall of Fame forward, dubbed “Quittin’ Pippen” for sitting out the closing seconds of a playoff game against the New York Knicks, has been haunted by the decision. There is no defending Pippen’s act, but properly framing it requires layers of context and an acknowledgment that the NBA’s power dynamics, financial landscape and media environment have changed dramatically over the past two-plus decades. Read more