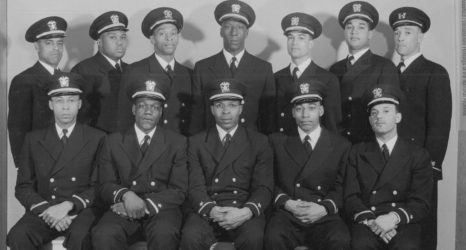 Featured – During World War II, the black press campaigned for a double victory – over tyranny abroad and segregation at home. By Dan C. Goldberg / The Undefeated

Pressure from the black press and political leaders forced the Navy to commission black officers during World War II. Shown here, in February 1944, are the first group. In the first few months following the attack on Pearl Harbor, many African Americans were conflicted about the war. Black men in Detroit were tearing up their draft cards, saying that if they must fight, they’d prefer to die in their hometown fighting the Ku Klux Klan. A new book looks at how the Navy was forced to commission its first black officers. Read more

African-Americans Are Highly Visible in the Military, but Almost Invisible at the Top. By Helene Cooper / NYT

Some 43 percent of the 1.3 million men and women on active duty in the United States military are people of color. But the people making crucial decisions, such as how to respond to the coronavirus crisis and how many troops to send to Afghanistan or Syria, are almost entirely white and male. Read more

I’m a public defender in Manhattan. The Central Park video is all too familiar. By Eliza Orlins / Wash Post

That viral video circulating of a white woman calling the police on a black man in New York’s Central Park on Monday was sadly all too familiar. The privilege that the woman in the video sought to weaponize with her 911 call is real — and the system that enables it is overdue for reform. Read more

Related: How White Women Use Themselves as Instruments of Terror. By Charles M. Blow / NYT

Another unarmed black man has died at the hands of police. When will it end? By Editorial Board / Wash Post

ANOTHER DAY in the United States, another unarmed black man dead following unwarranted, insupportable, outrageous police violence. When will it end? In Minneapolis on Monday evening, a white officer bore down with his knee on the neck of a handcuffed black man who lay sprawled on the street, rasping, “I cannot breathe” and “Don’t kill me.” The man died a short time after. Read more

In Large Texas Cities, Access To Coronavirus Testing May Depend On Where You Live. By Stephanie Adeline / NPR

Related: The virus is worsening the racial wealth gap. Careless rescue policies could, too. By Editorial Board / Wash Post

Related: The coronavirus is threatening diversity in academia. By Gwen Aviles / NBC News

For generations, the federal government has failed to honor its promises to Native American people. Now, covid-19 is ravaging Native communities, killing young people and elders alike, and devastating tribal economies. We are fighting in Congress to ensure that sovereign Native nations have the resources needed to protect the health and well-being of their citizens during this pandemic. Read more

Wendi C. Thomas launched MLK50 in 2017 as a one-year project to make the 50th anniversary of the assassination of the Rev. Dr. Martin Luther King Jr. a time to consider the current state of economic justice in the city where he was murdered while advocating for a living wage. Read more

Related: ‘I Am A Man’: New Orleans Sanitation Workers Strike for Dignity. By Jason Kerzinski / TheProgressive

Jennifer Carroll Foy is jumping into the 2021 gubernatorial race in Virginia, making her the first Black woman to run for the job in 30 years. If elected, she would be the first Black female governor anywhere in the country. “I look forward to being more bold in what we get done here in Virginia, especially dealing with everyday, kitchen table issues,” Carroll Foy, a 38-year-old state delegate, said in an interview with HuffPost. Read more

Civil liberties advocates celebrated after a federal court on Sunday struck down as unconstitutional a Florida law that would have denied the right to vote to nearly a million recently enfranchised state residents with past felony convictions until they paid all outstanding legal fees, fines and restitution. Read more

The New Russell Simmons Documentary Grapples With the Price Black Women Pay When They Accuse Their Own. By Jamilah King / Mother Jones

The most devastating scene in On the Record, HBO Max’s new documentary from Kirby Dick and Amy Ziering detailing sexual assault allegations against hip-hop mogul Russell Simmons, is about a love song, at least at first. And what we lose when women like Drew Dixon are pushed to the side. Shown is Drew Dixon. Read more

Gabrielle Union on diversity in Hollywood: ‘There are so many blind spots.’ By Andrew Nusca / Fortune

The American actress Gabrielle Union graces the cover of Variety magazine this morning with a new interview that sheds light on her unceremonious departure from the hit television series America’s Got Talent as well as the inner workings of NBCUniversal, which has grappled with workplace criticisms ranging from sexual abuse and harassment to inclusion and diversity. Read more

Jimmy Cobb, whose subtle and steady drumming formed the pulse of some of jazz’s most beloved recordings, died at his home in Manhattan on Sunday. He was 91. The cause was lung cancer, says his wife, Eleana Tee Cobb. Cobb was the last surviving member of what’s often called Miles Davis’ First Great Sextet. He held that title for almost three decades, serving as a conduit for many generations of jazz fans into the band that recorded the music’s most iconic and enduring album, Kind of Blue. Read more

Jennifer King has been a cop, a QB and a national champion. Next up: Redskins assistant coach. By Les Carpenter / Wash Post

It was late February, not long before everything shut down, and Washington Redskins Coach Ron Rivera stood at the NFL scouting combine and told a group of women aspiring to careers in football about his newest assistant coach, Jennifer King. “Her résumé is as good as any young male coach,” he said. “She’s learning from the bottom up,” he added. Then this. “She’s not there to be a token,” he said. Read more