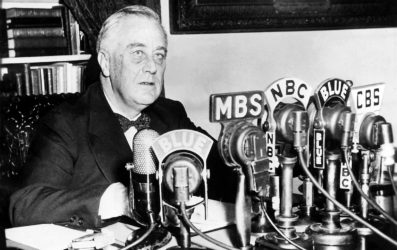 This is FDR’s proposed second Bill of Rights that was filmed after he delivered his State of the Union Address via radio on January 11, 1944. Watch here

America Needs Economic Rights. Now Is the Time to Push for Them. By Andrea Flynn and Susan R. Holmberg / The Nation

Seventy-five years ago today, President Franklin Delano Roosevelt used his State of the Union address to declare that the government should guarantee a basic floor of well-being. Political rights alone could not assure “equality in the pursuit of happiness,” he argued. “True individual freedom cannot exist without security and independence. Necessitous men are not free men.” FDR was calling for a second Bill of Rights—an Economic Bill of Rights—that would include the right to employment, housing, education, health care, and an economy free of unchecked corporate and monopoly power. Read more

Blacks and Hispanics lost their homes at a far higher rate than whites in the 2007 housing crash, forcing many into rental units. Now, in the latest crisis, it’s renters who are the hardest hit — and that’s threatening to widen the country’s already staggering racial wealth gap. Read more

Accordingly, the pandemic has exposed inequalities as education has moved online — work that can’t be performed at home, exposing usually lower-paid adults to greater risk; lack of access to child care and quality early learning; food insecurity; and a digital divide that prevents online learning during the crisis. Schools have stepped up to provide nutritional meals, computer equipment, Internet access and cover for essential workers, but they should not bear the burden alone. Ameliorating the effects of poverty is a citywide problem and responsibility. Read more

As of Friday, White’s ward, which is 89 percent black, had the District’s highest per capita rate of coronavirus-related deaths — six for every 10,000 residents — more evidence that the virus is disproportionately harming African Americans. Read more

As Georgia Gov. Brian Kemp (R) moves to reopen more businesses, a new study underscores the disproportionate toll the virus has taken on the state’s African American population. Surveying eight Georgia ­hospitals, researchers found that in a sample of 305 covid-19 patients, 247 were black — more than 80 percent and more than they expected. Read more

Coronavirus in Chicago: How the mayor of the nation’s 3rd-largest city is waging her biggest fight. By Grace Hauck / USA Today

Mayor Lori Lightfoot on Thursday announced Chicago’s first-ever citywide celebration of graduating seniors via a video of herself dancing posted to TikTok – the most recent in a series of viral social media posts that Lightfoot’s office has used to encourage residents to stay home amid the coronavirus outbreak. More than than 22,000 Chicagoans have been infected; 962 have died. Read more

Trump’s Nationalism Advances on a Predictable Trajectory to Violence. His Supporters Will Kill When They’re Told To. By Aleksandar Hemon / The Intercept

Ever since Donald Trump declared his presidential candidacy and rank racism in 2015, those of us who’d witnessed the nationalist undoing in the Balkans at the end of the last millennium have found the subsequent rise of Trumpism frighteningly familiar. The most important and troubling symptom is the open and ceaseless commitment to conflict meant to culminate in transformative, cathartic violence; this marks the beginning of collective self-actualization. As we bear witness to armed white American militias storming or protesting outside government institutions, it is clear that the chaos and tragedy of Covid-19 are being used by Trump and the GOP to enhance the conflict and accelerate the birth of a new, supposedly greater America. Read more

The Coronavirus Becomes a Battle Cry for U.S. Extremists. By Neil MacFarquhar / NYT

The irony is that the misinformation amplified by Diamond and Silk and others has gained traction in conservative, mostly white social media spaces and black, mostly left-leaning online spaces, too. Concepts similar enough to pass as first cousins on the misinformation family tree have proliferated in social media spaces that do not usually cross or blend. “What you have are the same, often very dangerous, ideas repackaged in a way that makes sense to very different groups of people,” said Shireen Mitchell, a researcher who studies online disinformation and harassment.”  Read more

A black woman is ‘not a must’ for Biden’s running mate, Clyburn says. By Mike Memoli / NBC News

As Biden now takes steps to begin formally vetting potential running mate, there are few voices more influential to the former vice president than Clyburn’s. And while there may be pressure from some in the party to not just choose a woman, but an African American woman, Clyburn is more circumspect. Read more

Two Weapons, a Chase, a Killing and No Charges. By Richard Fausset / NYT

Ahmaud Arbery loved to run. It was how the 25-year-old former high school football standout stayed fit, his friends said, and it was not unusual to see him running around the outskirts of the small coastal Georgia city near where he lived. According to a police report, two white men, Gregory McMichael, 64, called out to his son, Travis McMichael, 34. They grabbed their weapons, a .357 magnum revolver and a shotgun, jumped into a truck and began following Mr. Arbery.“Stop, stop,” they shouted at Mr. Arbery, “we want to talk to you.”Moments later, after a struggle over the shotgun, Mr. Arbery was killed, shot at least twice. Read more

El Paso Community College President William Serrata is working against the clock to convince both new and current Latino students to enroll in the fall despite coronavirus-related uncertainties. Otherwise, they may be less likely to earn a degree. “Higher education will become even more important” for Latinos’ economic recovery since more than 26 million people have filed for unemployment due to coronavirus-related business closures, he said during a media call Wednesday. Read more

Last fall when I wrote Grand for my eight-year-old grandson, Emery, and his generation, we were not living through a global pandemic. He was not doing remote learning with his teachers. I was not going to the grocery store wearing a mask. So the leitmotif of the inevitability of change and loss in the 10 items of grandfatherly wisdom I wanted to share with him is now something he is experiencing palpably. COVID-19 has upended all our lives. The specter of death and disease, and our fragility as well as resilience as human beings is dramatically on display every day. Read more

Stamped: Racism, Antiracism, and You: A Remix of the National Book Award-winning Stamped from the Beginning. By Jason Reynolds and Ibram X. Kendi

Four years ago, Kendi brilliantly documented the origins of racist ideas in his book “Stamped From the Beginning,” identifying racism as the culprit, defining its origin and then following its journey from the 16th century until modern times. On the heels of that book’s success, Kendi recruited Jason Reynolds, a best-selling YA author, to translate it into a version for younger readers, “Stamped,” so that the next generation won’t have to be confused as I was, growing up, about the origins of racism and racist ideas. Listen to an interview here

This revealing biography, W.E.B. Du Bois: A Life in American History, by Charisse Burden-Stelly and Gerald Horne. captures the full life of W.E.B. Du Bois—historian, sociologist, author, editor, and a leader in the fight to bring African Americans more fully into the American landscape as well as a forceful proponent of their leaving America altogether and returning to Africa. Drawing on extensive research and including new primary documents, sidebars, and analysis, Gerald Horne and Charisse Burden-Stelly offer a portrait of this remarkable man, paying special attention to the often-overlooked radical decades at the end of Du Bois’s life. Read more

The NBA G.O.A.T discussion – the greatest of all-time – is tiresome, and “The Last Dance” Michael Jordan documentary has re-ignited this tedious Jordan vs. LeBron James debate. But if we’re going to have this discussion about the greatest of all-time, then one seven-footer with an unstoppable sky hook shot belongs in the conversation. Kareem Abdul-Jabbar. Winner of six NBA titles (five with the Los Angeles Lakers), six MVPs, two Finals MVPs. He’s a 19-time All-Star, 15-time All-NBA performer and the NBA’s all-time leading scorer with 38,387 points. Read more