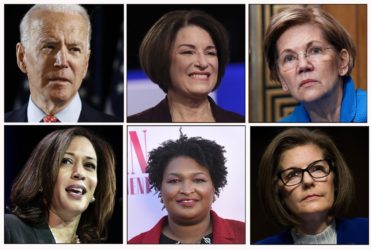 Joe Biden has hinted that he might serve only one term if he wins. That would set up a woman as the front-runner for 2024 and perhaps define the Democratic agenda for the next decade.“I view myself as a transition candidate,” Mr. Biden said during an online fund-raiser last week, likening his would-be presidential appointments to an athletic team stocking its roster with promising talent: “You got to get more people on the bench that are ready to go in — ‘Put me in coach, I’m ready to play.’ Well, there’s a lot of people that are ready to play, women and men.”  Read more

Will Americans Lose Their Right to Vote in the Pandemic? By Emily Bazelon / NYT Mag

The safest way to cast a ballot will very likely be by mail. But with opposition from the president, limited funding and time running out, will that option be available? A successful election will require some Covid-era changes. The main one is enabling tens of millions more people to vote by mail (also called absentee balloting — the terms are synonymous) than have ever done so before. “You’ve heard the election administrator’s prayer, right?” Persily asked me. “Whatever happens, dear Lord, please let it not be close.” Read more

Related: We Should Never Have to Vote in Person Again. By Charlotte Hill, Jacob Grumbach, Adam Bonica and Hakeem Jefferson / NYT

Black communities account for disproportionate number of Covid-19 deaths in the US, study finds. By Shelby Lin Erdman / CNN

There’s new evidence more African Americans may be dying from coronavirus in the United States than whites or other ethnic groups, according to a new study. Black Americans represent 13.4% of the American population, according to the US Census Bureau, but counties with higher black populations account for more than half of all Covid-19 cases and almost 60% of deaths, the study found. Disparities, including access to health care, are likely to blame, researchers concluded in a report released Tuesday. Read more

Related: When Blackness Is a Preexisting Condition. By Kimberle Williams Crenshaw / The Nation

Related:  Black Americans are bearing the brunt of coronavirus recession – this should come as no surprise. William M. Rogers III / The Conversation

The burden has been borne unevenly across gender, racial and socioeconomic lines, according to an Associated Press analysis of census data in the country’s 100 largest cities. They are mostly women, people of color and more likely to be immigrants. Workers deemed “essential” are also more likely to live below the federal poverty line or hover just above it. They are more likely to have children at home, and many live with others who also have front-line jobs. Read more

People — mostly white, sometimes armed, occasionally carrying Confederate flags or hoisting placards emblazoned with a Nazi slogan from the Holocaust — have been loudly protesting to push their state governments to reopen business and spaces before enough progress has been made to contain the coronavirus. This is yet another illustration of the race and class divide this pandemic has illuminated in this country. Read more

We Asked 30,000 Black Americans What They Need to Survive. Here’s What They Said. By Alicia Garza / Time

In 2018, we launched our Black Census Project, polling 30,000 respondents in the largest survey of Black people conducted in the United States since Reconstruction. It was clear from the results that the pain and legacy of slavery and Jim Crow still infect the everyday lives of Black communities. Many of us experience the written and unwritten rules in society that continue to conspire against us—because the rules of the game are, in fact, rigged. Read more

Black women in America are three times more likely to die of pregnancy- and childbirth-related causes than white women are, according to the Centers for Disease Control and Prevention. In Chicago, that tragic disparity doubles, with black women six times more likely than white women to die because of pregnancy and childbirth and even more experiencing injury or trauma. Experts fear that closures will become a trend nationwide because of the coronavirus, devastating an already vulnerable population. Read more

We get an update from two doctors treating patients with the Navajo Nation, the largest Indigenous reservation in the country, which has been hard hit by the coronavirus pandemic. Listen here

On Wednesday, Zia, Walker, Nguyen and other prominent Asian American community leaders spoke about the current climate as part of the Center for Asian American Media’s digital town hall, “Asian Americans in the Time of COVID-19.” The town hall, which was moderated by PBS Newshour correspondent Amna Nawaz, highlighted various moments in Asian American history and culture in an effort to contextualize and understand the experiences of Asian Americans during the pandemic. Listen here

‘Dying of whiteness’ during the coronavirus pandemic. By Jonathan Capehart / Wash Post Podcast

In his book “Dying of Whiteness: How the politics of racial resentment is killing America’s heartland,” Jonathan Metzl, the director of Vanderbilt University’s Center for Medicine, Health and Society, put a human face on the opposition to many policies that would save lives and livelihoods. We talked all about it when I interviewed him back in January. I brought Metzl back because the novel coronavirus is amplifying his argument. Listen here

Larry Wilmore: Trump ‘Was a Lock’ Before the Coronavirus. By Matt Wilstein / The Daily Beast Podcast

Larry Wilmore knew Donald Trump was going to win the 2016 election from the very beginning. “I did not like that prediction,” he tells me on this week’s episode of The Last Laugh podcast. When it actually happened, he adds, “I was still surprised, but not shocked. Most of the people I know were shocked.” “For me, I just want Trump gone,” he says. “I’m a very simple creature. This is one of the rare times I’m voting against someone. I rarely do that.” Listen here

The 2020 Pulitzer Prizes, announced on Monday, included one very important posthumous winner: Ida B. Wells, a Black woman who became one of the most prominent and intrepid investigative journalists in American history. Wells (1862-1931) was honored with the 2020 prize in the Special Citations and Awards category “for her outstanding and courageous reporting on the horrific and vicious violence against African Americans during the era of lynching,” the Pulitzer Prize Board said.  Read more

Related: How Ida B. Wells changed my life. By Roxanne Jones / CNN

Nikole Hannah-Jones was awarded the 2020 Pulitzer Prize for Commentary for The 1619 Project, The New York Times Magazine’s groundbreaking exploration of the legacy of Black Americans starting with the arrival of the first enslaved Africans in 1619. Read more

Related: The ‘1619 Project’ is filled with slovenliness and ideological ax-grinding. By George F. Will / Wash Post

Colson Whitehead has won the 2020 Pulitzer Prize for fiction for his 2019 novel Nickel Boys. The win comes just three years after Whitehead won the Prize for his 2016 novel The Underground Railroad, making Whitehead the fourth writer ever to have won the Pulitzer for fiction twice. Read more

Here’s what happened to the $2 million Michael Jordan donated in 2016. By Martenzie Johnson / The Undefeated

On July 25, 2016, following the police-involved shootings of two black men, Philando Castile and Alton Sterling, and the fatal shooting of five Dallas police officers at a protest, Charlotte Hornets owner Michael Jordan donated $1 million each to two organizations in an effort to “foster greater understanding, positive change and create a more peaceful world for ourselves, our children, our families and our communities,” he wrote in a letter that appeared on The Undefeated. Those donations to the NAACP Legal Defense and Educational Fund, Inc. (LDF) and International Association of Chiefs of Police (IACP) were notable, not just because of the size of the grants, but also because of the notable reputation of Jordan. Read more

Related: 30 Years Later, Michael Jordan Still Can’t Admit He Was Wrong For Not Standing Up When It Counted