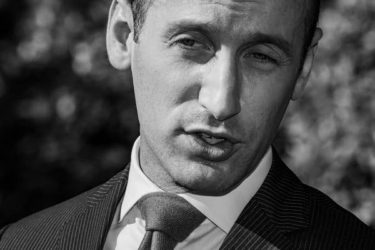 Somewhat lost in the frenzy over impeachment this week was a report from the Southern Poverty Law Center on Stephen Miller, a White House speechwriter and close adviser to the president. An analysis of more than 900 emails from Miller to editors at Breitbart News, the report shows Miller’s single-minded focus on nonwhite immigration and his immersion in an online ecosystem of virulent, unapologetic racism. The Miller of these emails isn’t just an immigration restrictionist, he’s an ideological white nationalist. Read more  Also see, Stephen Miller is no outlier. White supremacy rules the Republican party
Also see, Democrats call for Stephen Miller to resign after leak of xenophobic emails

It has been a year since Pressley became the first black woman that Massachusetts voters have ever elected to the House of Representatives. On Thursday, Rep. Pressley, a Democrat, put forth a new House resolution that uses five principles — shared power, freedom, equality, safety, and dignity — as guides to launch expansive reforms of, as she put in a statement, “a racist, xenophobic, rogue, and fundamentally flawed criminal legal system.” Included among those are lowering the prison population, abolishing the death penalty nationwide, shoring up the American social safety net, and helping those who are confined by improving health care and ensuring their civil rights. Read more

Is a color-blind political system possible under our Constitution? If it is, the Supreme Court’s evisceration of the Voting Rights Act in 2013 did little to help matters. While black people in America today are not experiencing 1950s levels of voter suppression, efforts to keep them and other citizens from participating in elections began within 24 hours of the Shelby County v. Holder ruling and have only increased since then. Read more

The 1619 Project, Live at the Smithsonian. By Nicole Hannah-Jones / NYT

Watch a conversation about how history is defined — and redefined — featuring historians, journalists and policymakers. Shown is Nicole Hannah-Jones at the Smithsonian’s National Museum of African American History and Culture. Watch here

The battle for voting rights in the age of mass incarceration. By Rosemary Westwood / Vox

Ex-prisoners are getting their voting rights back. But the backlash has already started. Shauntelle Mitchell waited in her local polling station in Slidell, Louisiana, and contemplated leaving. The October primary election would be her first time voting in years — her criminal record had prevented her from casting a ballot since 2011. This year, re-registered and finally free to vote, she felt nervous. Read more

Why Virginia’s progress on racism has been slow. By Dusty Horwitt / Wash Post

One of the best sights in my hometown of Arlington this fall is the new name of our oldest high school, once called Washington-Lee, where I played sports in the 1980s. The Arlington School Board’s decision to remove Robert E. Lee’s name from the school and to rename it Washington-Liberty reflected a recognition that Lee’s defense of slavery as leader of the Confederate army made him unacceptable as a symbol of the school system. Read more

Why White Parents Were at the Front of the Line for the School Tour. By Eliza Shapiro / NYT

On a recent Tuesday, there were about a hundred mostly white parents queued up at 2:30 p.m. in the spitting rain outside of Beacon High School, some toting snacks and even a few folding chairs for the long wait. The doors of the highly selective, extremely popular school would not open for another two hours for the tour. The lines that surround Beacon and other elite high schools are a living symbol of the anxiety, competition and inequality that define New York’s segregated public school system. Read more

Pete Buttigieg is struggling with black voters — and not just because he’s gay. By Janell Ross / NBC News

ROCK HILL, S.C. — On a recent Sunday morning, Pete Buttigieg stood before rows of black churchgoers, a group he and the other Democratic 2020 candidates must win over for a reasonable chance of capturing their party’s presidential nomination. “I know what it is to look on the news and see your rights up for debate,” he told the crowd gathered in the sanctuary of an African Methodist Episcopal events center in Rock Hill. “I also know what it is to find acceptance where you least expect it and to find compassion when you most need it.” Read more

Former Massachusetts Gov. Deval Patrick announced Thursday that he will run for the Democratic presidential nomination. His late entry presents big hurdles, both in fundraising and when it comes to building a campaign organization that can keep pace with other candidates who have been running for almost a year. Read more

The economy, jobs and health care will most influence the voting decisions of registered Latino voters in Texas, California and Clark County, Nevada, Telemundo polls released Friday show. Majorities in all three locations supported the impeachment and removal of Trump from office: In California, it was 59 percent, in Clark County, 58 percent and less so in Texas, at 52 percent. Just over 80 percent of Nevada’s Latino voters live in Clark County, which includes Las Vegas. Read more

Put the Vandalized Emmett Till Signs in Museums. By Dave Tell / NYT

Shown is the  bullet-riddled sign near where Emmett Till’s body was found. It’s becoming something of a cycle. Every time a new sign is erected to mark the spot where, in 1955, Emmett Till’s body was pulled from the Tallahatchie River in Mississippi, the sign gets vandalized, it gets replaced and it gets vandalized again. And replaced again. Read more

‘Black Radical’ Remembers a Bold Life and Reclaims It for Our Current Moment. By Jennifer Szalai / NYT

William Monroe Trotter, who edited the Boston-based black weekly newspaper The Guardian in the first three decades of the 20th century, shows up in the biographies of his contemporaries as a gadfly: radical, outspoken and indefatigable. That man comes through in “Black Radical,” Kerri K. Greenidge’s spirited biography, an ardent and mostly approving account of Trotter’s life that nevertheless conveys the more vexing elements of his personality. Read more

The Mysterious Death of Boxing’s Most Fearsome Fighter. By Nick Schager / Daily Beast

There was arguably no more intimidating fighter in boxing history than Sonny Liston. Yet as elucidated by Pariah: The Lives and Deaths of Sonny Liston, that may be the only definitive thing one can say about the former heavyweight champion, who despite his celebrity lived much of his life in the shadows—which is where he also died, alone, in 1970, the victim of any number of possible enemies. The new documentary “Pariah: The Lives and Deaths of Sonny Liston” explores the life and curious death of the boxing legend, including his deep mob ties and dubious losses to Ali. Read more

Oscar-winning actress and comedian Mo’Nique sued Netflix on Thursday, accusing the streaming giant of racial and gender discrimination by trying to drastically underpay her for a stand-up special after offering other stars tens of millions of dollars. Read more

In the past three years, Colin Kaepernick has become one of the most prominent, and influential, public figures in American culture, even if he is rarely seen on a TV screen. Now he has been invited to audition for the N.F.L. on Saturday, despite, or maybe because of, his high profile as a banished athlete. The opportunity, though, has been shrouded in confusion befitting the league’s mishandling of Kaepernick and the player protest movement he inspired. Read more

Darryl Pinckney on Race, Class and Being ‘Busted in New York.’ By Lauretta Charlton / NYT

According to a rumor in New Orleans, an old family restaurant used to give a free ham to any police officer who killed a black person in the line of duty. The restaurant stopped doing this only in the 1980s, the story goes, when a black police officer came in to claim his ham. The lesson: In white America, a black man in a uniform is still just a black man. Observations like this one are at the heart of “Busted in New York,” a new essay collection by the novelist and essayist Darryl Pinckney. Pinckney has written for The New York Review of Books for decades, and most of the 25 essays here appeared there first. Read more