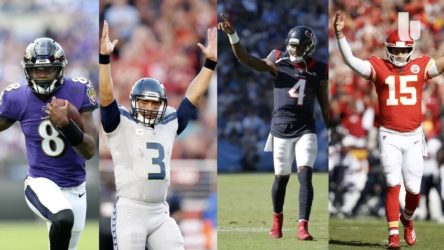 Featured – 2019 is the Year of the Black QB. By Jason Reid / The Undefeated

The Undefeated’s senior writer Jason Reid details how black quarterbacks have taken over the NFL this season, and which ones have the best chance to win MVP. Watch here

The history of black baseball in D.C. includes Frederick Douglass’ sons, Josh Gibson and the fight for equality. By Rhiannon Walker / The Undefeated

Washington, D.C.’s, first two black teams were formed 151 years ago as acts of resistance and to show white people that if given equal opportunity, black people could be just as if not more successful in anything they undertook. Charles Douglass’ objective when he ran the Mutuals, however, was not integration at all costs. Black Washingtonians’ participation in baseball was about “autonomy, equality and opportunity,” historian Ryan Swanson notes. Read more

The Lives That Won’t Ever Matter In Trump’s America. By Jamil Smith / Rolling Stone

The macabre video from the Trump Miami resort, depicting a Kingsman: The Secret Service character with Trump’s head superimposed murdering media entities and political enemies indiscriminately, isn’t in and of itself a death threat. But it displays the kind of sophomoric disregard for the lives of individuals, or those who work at the companies, whom their heroic president so ruthlessly eviscerates. It isn’t some movie-style shoot-em-up. It wishes for state violence against politicians, critics, and the media. Read more

Did Warren Pass the Medicare Test? I Think So. By Paul Krugman / NYT

Experts will argue for months whether she’s being too optimistic — whether her cost estimates are too low and her revenue estimates too high, whether we can really do this without middle-class tax hikes. You might say that time will tell, but it probably won’t: Even if Warren becomes president, and Dems take the Senate too, it’s very unlikely that Medicare for all will happen any time soon. Read more

The Massacre That Spawned the Alt-Right. By Shaun Assael / Politico

“Death to the Klan!” On Saturday, November 3, 1979, that chant swept over Morningside Homes, a mostly black housing project in Greensboro, North Carolina, as dozens of protesters—some donning blue hard hats for protection—hammered placards onto signposts and danced in the morning sun.  What happened next took just 88 seconds, but still reverberates 40 years later. In a confrontation where white supremacists began firing pistols, rifles and shotguns, and with television cameras rolling but police nowhere to be found, five communists were shot dead in broad daylight. Ten others were injured, some left to lie bleeding in the streets. Greensboro was the place where the farthest-right groups of white supremacy learned to kill together. After November 3, 1979, it was suddenly possible to imagine Confederate flags flying alongside swastikas in Charlottesville. Read more

For weeks, Stern had been courting Jeff Schoep, the longtime leader of the National Socialist Movement, in recorded phone calls. His mission: to persuade Schoep, 45, to turn over the country’s largest neo-Nazi group to a black man. His promise: to get Schoep and his organization removed from a federal lawsuit alleging that he and two dozen other hate groups and their leaders had conspired to commit violence while organizing the 2017 Unite the Right rally in Charlottesville. Read more

‘We Need Everybody’: An interview with Black Lives Matter co-founder Alicia Garza. By Alexander Tempus / The Progressive

Over the course of our discussion, we talked more about the issue of mass incarceration and how it’s become a shaky crutch for politicians attempting to take a stand on racial justice. We talked about how the Black Census Project reveals that black communities are broadly misunderstood and misrepresented in the democratic process. And we talked about how, in the year leading up to the 2020 presidential election, black people might not merely be heard but actually be, Garza says, “powerful in politics.” Read more

I watched the Justice Votes 2020 forum held on Oct. 28 in New Jersey’s Eastern State Penitentiary Historic Site, a former prison, sponsored by The Marshall Project and hosted by Voters Organized To Educate—the first presidential town hall hosted by formerly incarcerated leaders, with an audience of formerly incarcerated people and criminal justice organizers and activists. Since this not only was a groundbreaking event, the first of its kind, but was covering the criminal justice (or injustice) system, I made it my business to tune in. Read more

Mississippi governor’s race taking place under Jim Crow-era rules after judge refuses to block them. By Gideon Cohn-Postar / The Conversation

A federal judge ruled on Nov. 1 that he would not stop Mississippi voters from electing a governor on Tuesday under an old, Jim Crow-era election law that a civil rights lawsuit argues perpetuates “white supremacy” and violates the principle of “one-person, one-vote.” U.S. District Judge Daniel Jordan wrote that he had “grave concern” about the unconstitutionality of part of the law. But with the election nearing on Nov. 5, he ruled that time was too short to issue an injunction altering the state’s voting scheme for statewide officers. Read more

As students applying early to college finalize their applications ahead of looming November deadlines, some Asian Americans are wondering how race might affect their chances of admission this year at Harvard, as well as other highly selective schools across the country. It’s a question that comes after a federal judge ruled this fall that Harvard does not discriminate against Asian American applicants. That case, which could end up in the U.S. Supreme Court, has led some high school seniors to rethink how they package themselves, whether through their personal statements or their recommendation letters. Read more

The First Black Mayor Of Talladega, Alabama, Is Poised To Push His City Into The Future. By Phillip Lewis / HuffPost

Tim Ragland is a very busy man. He was recently elected as the first Black mayor of the city of Talladega, Alabama, in a runoff early October, defeating incumbent Jerry Cooper by a mere 24 votes. Ragland will be sworn into office next week, but he’ll soon have more to celebrate — he’ll have graduated from law school come May. Read more

To Fix Racial Gerrymander, North Carolina Republicans Considered a Map That Could Have Elected an All-White Slate. By David Daley / The Intercept

“I propose that we draw the maps to give a partisan advantage to 10 Republicans and three Democrats,” said North Carolina Rep. David Lewis, in 2016 in a legislative committee hearing, “because I do not believe it’s possible to draw a map with 11 Republicans and two Democrats. ”This might be the most infamous gerrymandering confession ever — a rare moment of clarity exposing the GOP’s ambition to control the state’s map through redistricting. Read more

November is National Native American Heritage Month. It’s a time to recognize the many sacrifices, contributions and achievements of Native American people, as well as celebrate their rich and vibrant cultures. In 1990, President George H.W. Bush approved a joint resolution designating November as “National American Indian Heritage Month.” Although the name eventually changed, it started an annual tradition upheld in communities across the United States. For those wanting to participate, here are five ways to honor Native Americans this month — and every month. Read more

How a lawsuit over Detroit schools could have an ‘earth-shattering’ impact. By Erin Einhorn / NBC News

The Detroit case was filed in 2016 on behalf of Hall and other students who attended rodent-infested, crumbling schools that lacked certified teachers and up-to-date textbooks. It argued that appalling conditions, including an eighth grader who taught math to his classmates for a month after his teacher quit, denied students a basic right to literacy. A similar case was filed on behalf of students in Rhode Island last year, asserting that they were denied a basic civics education. If either case succeeds and is ultimately upheld by the Supreme Court, Black said, it would establish for the first time that students have a “fundamental right” to an education that meets minimum standards of quality. “It would lay down a huge marker in terms of how all the states across the nation fund or don’t fund their schools,” Black said. Read more

Black kids go missing at a higher rate than white kids. Here’s why we don’t hear about them. By Harmeet Kaur / CNN

The chilling story of Jayme Closs, the 13-year-old Wisconsin girl who was kidnapped after her parents were killed last year, was national news. But people might be less familiar with the story of Arianna Fitts, a 2-year-old who went missing in 2016 before her mother was found brutally murdered in the San Francisco Bay Area. Each of these cases is compelling, but the two didn’t receive the same amount of media attention. Some experts believe it’s because Closs is white and Fitts is black. Read more

Oprah’s Book Club Changed the Game—and Created a New World for Black Readers Like Me. By Jamilah King / Mother Jones

When Colson Whitehead got the call, he’d just landed in North Carolina to do a reading at Duke. He was still on the plane when, he told the Guardian, “I called [my agent] back and she said, ‘Oprah.’ I said, ‘Shut the front door,’ because I didn’t want to curse. She said, ‘Oprah book club.’ I said, ‘Motherfucker.’” Whitehead’s sixth novel, The Underground Railroad, getting chosen by Oprah was a door opening, or really more one blasting open—and Whitehead clearly knew it. Read more

The Glorious Return of Funk. By Nate Slaoan / NYT

The 2014 single from Bruno Mars went not platinum but diamond and remains the poster child for renewed interest in the sound of funk that’s now half a decade strong. Read and listen here