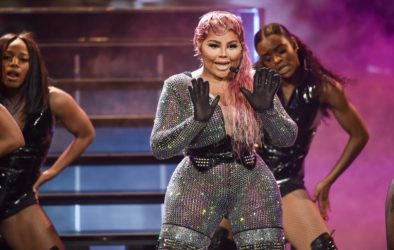 After being awarded the I Am Hip Hop Award by Rick Ross at the 2019 BET Hip Hop Awards, Lil’ Kim closed out the show with a medley of some of her most memorable songs. The rapper was joined by O.T. Gensis, Musiq Soulchild and Junior M.A.F.I.A. In the performance, Lil Kim opens up with “Lighters Up,” from her album The Naked Truth. During the medley, she also takes on Junior M.A.F.I.A.’s “Player’s Anthem” and her verse on Puff Daddy’s “It’s All About the Benjamins.” Watch here

A Wave of Rap Docs Shows the Genre Has Entered Its Classic Rock Phase. By Jack Hamilton / Slate

Netflix, Showtime, and now AMC have all have series chronicling hip-hop history. Which are actually worth watching? Shown are Jay-Z and Kanye West as seen in the first episode of AMC’s Hip Hop: The Songs That Shook America. Hip-hop has long been infatuated with its own history. “You love to hear the story, again and again/ Of how it all got started, way back when” declared the Juice Crew’s MC Shan at the beginning of his 1986 classic “The Bridge,” a song made when recorded rap music was a mere 7 years old. Read more

Montgomery elected its first black mayor in 200 years. This is why it matters. By Faith Karimi and LaRell Reynolds / CNN

In the two centuries since its founding, Alabama’s capital of Montgomery and the birthplace of the civil rights movement has never had a black mayor. That changed Tuesday when Montgomery County probate judge Steven Reed won a runoff election to become the first black mayor of the city founded in 1819. He defeated television station owner David Woods by more than 16,000 votes. Read more

Impeachment is the latest chapter in the battle between democracy and white supremacy. By Carol Anderson / Wash Post

President Trump has called the impeachment inquiry facing him “bullshit” and tweeted furiously that it is nothing less than a coup. He has even warned of a civil war. These claims are as incendiary as his demonization of immigrants, his barely veiled anti-Semitism and his embrace by and of white supremacists, all of which have already led to violence, hate crimes and slaughter. That is the threat he holds over our heads: to “tear our country apart” if Congress holds him accountable, a threat militia groups, including those with ties to white power organizing, are taking seriously. Yet if we bow down to his threats, it will once again be the United States capitulating to extortion, something made possible by Trump’s commitment to a raft of racist policies he promises his base in return for unchecked power. When it comes to a nation held hostage to racism, we have been here before. Read more

Blacks and Latinos in L.A. are over three times more likely to be stopped and searched while driving in comparison to their white counterparts, a recent analysis from the Los Angeles Times has revealed—and yet, whites are more likely to be found carrying illicit goods. Read more

The student loan debt crisis disproportionately affects minorities, and thanks to a recent BET special, students were able to discuss what it means to be Young, Gifted, & Broke. On the special, hosted by political strategist Angela Rye, black graduates from historically black colleges and universities (HBCUs) and predominantly white institutions (PWIs) told stories of how their families are affected by educational debt. Some students revealed the balances owed on their loans and sought solutions. Read more

For Chinese American Conservatives, Race Is a Weapon. By Claire Jean Kim / The Nation

Oprah donated $13 million to Morehouse College. Her endowment is now the largest in the school’s history. By Amir Vera / CNN

Winfrey visited the all men’s historically black college Monday for the 30th anniversary of the Oprah Winfrey Scholars Program, the release said. The program started in 1989 and the fund stands at $12 million. Monday’s donation of $13 million pushed her total investment to $25 million. “Seeing you young Oprah Winfrey scholars here today has moved me deeply,” Winfrey said Monday before announcing her donation. “I am so proud of you, I’m proud of everybody in attendance at this school who is seeking to know more clearly who you are, the value you hold and how you will share that value with the rest of the world.” Read more

Why is the Army Still Honoring Confederate Generals? By James Risen / The Intercept

In the South in the years before the Civil War, it would have been difficult to find a more zealous advocate for slavery than Henry Lewis Benning. He was a firebrand from Georgia and an early advocate of Southern secession. As his public stature rose, Benning became an increasingly ardent voice for the creation of a pro-slavery Southern republic. He helped draft Georgia’s ordinance of secession, which took the state out of the Union just before the Civil War. Today, Benning would be a long-forgotten footnote to the history of Southern white supremacy — if not for the U.S. Army. That’s because the Army honors Benning above almost any other military officer in American history. Fort Benning, in Georgia, one of the most important military installations in the United States, is named for him. Read more

“They’re Using Us as Props for the Show.” By Ruth Graham / Slate

Founded in the early 2000s, Relevant calls itself “the leading platform reaching Christian twenty- and thirtysomethings.” It produces podcasts, a frequently updated website, and a bimonthly print magazine focused on culture, spirituality, and social issues. Within evangelical Christian culture, Relevant is a well-known brand. Andre Henry, who is black, wrote, he was stripped of editorial decision-making power, though he remained a writer and podcast voice. “I’ve come to accept that many young-ish, white, evangelical leaders with large platforms … are simply not committed to being antiracist, but only in appearing non-racist,” he wrote, “and they’re using us as props for the show.” Read more

Nearly 100 years after a race massacre left hundreds of black people dead, Tulsa began searching for evidence that victims of one of the country’s worst episodes of racial violence were buried in mass graves. Read more

What It’s Like to See ‘Slave Play’ as a Black Person. By Aisha Harris / NYT

The show was “Slave Play,” and the demographic that night was not incidental — the playwright Jeremy O. Harris and the show’s producers had given away free tickets to black student organizations and sent out invitations to a group of black artists, performers and journalists. The event was dubbed a “Black Out.” Read more

Online dating, now the most common way for couples to meet, is desegregating America. By Reuben J. Thomas / NBC News

This rise in the pairing off of total strangers is changing the kinds of couples that become families, and that is changing the makeup of the next generation of Americans they raise. Most dramatically, online dating is acting as a desegregating force in the U.S. and creating families that blur social boundaries, which can lead to those boundaries becoming less meaningful over time. Read more

It’s time the NCAA loses its greedy grip on student-athletes. By Etan Thomas / The Undefeated

LeBron James hosted California Gov. Gavin Newsom as he signed into law a bill allowing college athletes to be paid on Sept. 30, 2019. Newsom said on James’ show: “It’s going to change college sports for the better by having now the interests, finally, of the athletes on par with the interests of the institutions.” Read more

We’ve Never Forgiven Haiti for Being Black. By Rann Miller / The Progressive

American public policy surrounding Haiti still contributes to ongoing misery there today—including conditions that have erupted in protests in recent weeks. There has been no formal response from the White House regarding these protests, but it’s plausible to assume what the Trump Administration’s response will be—something similar to Donald Trump’s referral of Haiti as a “shithole” last year. His attitude is hardly unprecedented. It is indicative of American public policy surrounding Haiti since its founding—which continues to influence ongoing misery there today. Read more