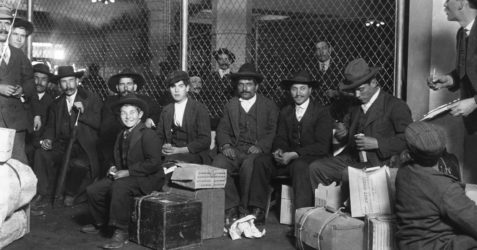 Congress envisioned a white, Protestant and culturally homogeneous America when it declared in 1790 that only “free white persons, who have, or shall migrate into the United States” were eligible to become naturalized citizens. The calculus of racism underwent swift revision when waves of culturally diverse immigrants from the far corners of Europe changed the face of the country. Darker skinned southern Italians endured the penalties of blackness on both sides of the Atlantic. In Italy, Northerners had long held that Southerners — particularly Sicilians — were an “uncivilized” and racially inferior people, too obviously African to be part of Europe. Read more

Steven Spielberg Battles White Supremacy in the Age of Trump. By Nick Schager / The Daily Beast

It will surprise no one that Donald Trump factors heavily into Why We Hate, a six-part Discovery Channel documentary series (executive produced by Steven Spielberg and Alex Gibney) that investigates the many forms and causes of—and possible remedies for—intolerance. Why We Hate premires Sunday, October 13. A six part series. Read more

How ‘White Guilt’ in the Age of Trump Shapes the Democratic Primary. By Astead W. Herndon / NYT

White liberals are thinking more explicitly about race than they did even a decade ago, according to new research and polling. In one survey, an overwhelming majority said that racial discrimination affects the lives of black people. They embrace terms like “structural racism” and “white privilege.” Read more

There were once 3 capitals of the Confederacy. All three cities now have black mayors. By Leah Asmelash / CNN

The tides of history continue to turn. The Confederacy had three capital cities at varying points: Montgomery, Alabama; Richmond, Virginia; and Danville, Virginia. But thanks to the election of Steven Reed on Tuesday in Montgomery, all three cities now have black mayors. Here’s what you need to know about the cities and their mayors. Shown is Richmond Mayor, Levar Stoney. Read more

The Supreme Court May Soon Deal a Final, Fatal Blow to the Voting Rights Act. By Mark Joseph Stern / Slate

The court’s 5–4 decision in Shelby County v. Holder nullified preclearance, a requirement that historically racist states secure approval from the federal government before changing their election laws. Now, the courts are primed to deal another, possibly fatal, blow to the landmark civil rights law. Shelby County did not uproot the VRA entirely. The court left in place Section 2, which prohibits any law that has the purpose or effect of abridging racial minorities’ right to vote. Section 2, the majority noted, “is not at issue in this case,” suggesting that it could still be used to protect the franchise. Now, six years later, Section 2 is in serious trouble. Read more

Biden is creating a generational divide among black voters. By David Love / CNN

While polls suggest Joe Biden leads among black voters, please read the fine print. Although Barack Obama’s vice president touts his African-American support by saying “I think they know me,” in reality that support is conditional, more specifically generational, and therefore flimsy and tenuous. Biden enjoys widespread support among older black adults, leaving some younger black voters to try to convince their parents and grandparents to change their ways and shift their vote for the 2020 election. Read more

This Top Gifted and Talented School Is Integrated. Is It the Future? By Eliza Shapiro / NYT

Every morning, students from each of New York City’s five boroughs pull on red plaid uniforms and head to an unusual school in East Harlem. TAG Young Scholars is one of the highest-performing schools in the city. It is also the only ultra-selective gifted and talented school in New York that is more than a third black and Hispanic, thanks in part to an admissions policy that explicitly encourages diversity. Read more

This trail-blazing suburb has tried for 60 years to tackle race. What if trying isn’t enough? By Laura Meckler / Wash Post

It’s an article of faith in this Cleveland suburb: If any place can navigate the complex issues of race in America, it’s Shaker Heights. Sixty years ago, black and white families came together to create and maintain integrated neighborhoods. The school district began voluntary busing in 1970, and boundary lines were drawn to make schools more integrated. So why, last November, was 16-year-old Olivia McDowell on the stage of Shaker Heights High School, begging the packed auditorium to understand how hard it is to be one of the few black kids in Advanced Placement English? Read more

A historically black college in Maryland is growing — by enrolling Hispanic, white and international students. By Talia Richman / Wash Post

Morgan State University’s enrollment is on the upswing, a trend that’s bolstered by a rising number of non-African American students who are attending the historically black institution. The student body has grown by 15 percent since 2006, from roughly 6,700 students to 7,700. The growth is largely because far more Hispanic, white and international students have chosen to enroll at Morgan, while the number of black students at the Baltimore campus has held relatively steady. Read more

The Penn State hair letter controversy shows how being black and proud is still political. By Anthea Butler / NBC News

Penn State’s football team is on a winning streak, but all one fan noticed recently was star safety Jonathan Sutherland’s locs, describing them in an unsolicited, racist letter to the player as “awful hair,” “disgusting” and “certainly not attractive.” Read more

A VC Fund Backed By Kevin Durant And Diddy Will Donate Its Profits to 11 Charities Improving Diversity In Tech. By Biz Carson / Forbes

On Friday, the fund announced it had selected the 11 organizations it plans to donate its management fees and future carry to, ranging from The Last Mile, which helps incarcerated individuals learn to code, to Management Leadership for Tomorrow, which helps train Black, Latinx and Native American leaders. Read more

Can the Rebirth of a Negro League Stadium Revive a Distressed City? By Kelly Whiteside / NYT

Hinchliffe, vacant since 1997, is one of the few stadiums from the Negro leagues still standing. An architectural gem and a symbol of perseverance amid racial injustice, it became a casualty of this economically distressed city’s more pressing needs. After multiple failed attempts to fund its revival, a ninth-inning save seemed unlikely. Until now. Read more

“When they say it’s not about race and partisanship,” said Virginia Democratic Rep. Gerry Connolly, “you can be sure it’s about race and partisanship.” He was speaking to his Republican opponents in last month’s congressional hearing on whether D.C. should be granted statehood with full representation. But he could have been describing the majority of debates over statehood dating back to the country’s founding. Read more

Parasite Is the Best Movie of the Year So Far. By Dana Stevens / Slate

Parasite maybe the best film the protean South Korean writer-director Bong Joon-ho has yet made. It begins as a social-realist drama about a poor family struggling to find work in modern-day Seoul. By the end of its brisk two hours and 11 minutes, it will have cycled through black comedy, social satire, suspense, and slapstick. Read more

A bronze statue honoring the Columbus, Georgia, native, Eugene Bullard, was finally unveiled on Wednesday before a cheering crowd of descendants, U.S. service members, French officials and other guests, The Atlanta Journal Constitution reported. Bullard, the child of a former slave who fled the Jim Crow South after witnessing the near lynching of his father, would go on to fight for the French Foreign Legion in World War I. He managed to have a little fun along the way, boxing professionally and drumming for a jazz band in Paris. He even rubbed elbows with the likes of trumpeter Louis Armstrong. Read more

Atlanta fans didn’t find a foam tomahawk on their seats at Game 5 of the National League Division Series game against the St. Louis Cardinals, a decision the ballclub announced shortly before the game. The change came days after comments from Cardinals pitcher Ryan Helsley, who is Cherokee. Helsley expressed his surprise and shock at Atlanta fans’ doing the racist and all-too-popular “tomahawk chop” chant, and waving the foam souvenirs as he took the mound during the eighth inning of Game 1. Read more

Larry Bird Q&A: Being a white player in the NBA, trash-talking and today’s game. By Marc J. Spears / The Undefeated

Bird, 62, sat down with The Undefeated during the NBA India Games to talk about his influence on the league, the “Malice in the Palace,” his favorite NBA players, how he would fare in the NBA today, and much more. Read more