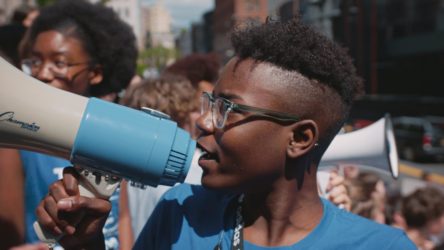 Two teenagers — one black, the other white — growing up a few miles apart have had two very different experiences in the New York City public school system. The gap in the quality of their education has likely put them on unequal paths for the rest of their lives. It wasn’t supposed to be this way in New York, one of the country’s most diverse cities with more than 8 million people and 800 languages. And yet, it has one of the most segregated school systems in the nation. Read more

The Charter-to-Prison Pipeline. By Alexandria Millet / The Progressive

The public school system gets a lot of (well-deserved) heat for the school-to-prison pipeline—for pushing children through disciplinary practices into the juvenile justice system and, eventually to prison. This pipeline disproportionately impacts students of color. Often, privately operated charter schools are exempt from criticism in the unique role they play in the pipeline. Read more

The Net Worth Of Every 2020 Presidential Candidate. By Dan Alexander / Forbes

Rising college costs, the student loan crisis and federal budget cuts have broadly hamstrung higher education. But it’s killing H.B.C.U.s, where nearly three in five attendees are low-income, first-generation students and over 70 percent of students have limited financial resources. Fifteen of them have closed since 1997. Read more

White UConn students were arrested for shouting the n-word. Black students say the incident is part of a larger problem. By P.R. Lockhart / Vox

For more than a week, students at the University of Connecticut have been outraged over a recent video showing a small group of white students walking on campus, yelling the n-word. As anger over the incident has grown, UConn’s black students have stressed that the controversy highlights a long-standing set of problems on their campus: Racist acts are continuing to alienate the school’s black students, and UConn’s administration is not doing enough to punish students for it. Read more

A new survey from the Public Religion Research Institute illustrates how loyal this powerful religious demographic is to Trump ― and how deeply alienated it is from other major American religious groups, particularly Christians of color and the religiously unaffiliated. Eighty-eight percent of white evangelical Protestants said they don’t think Trump should be impeached and removed from office — significantly more than any other major religious group surveyed in PRRI’s 2019 American Values Survey. The majority of other white mainline Protestants and white Catholics shared the same view, but not as strongly. Read more

Senator Lindsey Graham is “a piece of shit,” said former U.N. Ambassador Susan Rice, speaking on a podcast with former fellow Obama deputies. Rice’s comments surfaced the same day Graham, a South Carolina Republican, defended president Trump’s claim that the House’s impeachment inquiry was “a lynching.”  In extended comments, Graham insisted: “This is a lynching, in every sense.” Read more

How Florida Republicans Are Talking About Impeachment. By Darlena Cunha / NYT

Working-class Republicans see Donald Trump as a white businessman who made a lot of money. The investigations only strengthen their kinship with him. Read more

What allows far-right terrorist groups to thrive in the U.S. is a legal double standard that binds the hands of even the most proactive members of law enforcement. Read more

A mob lynching of 4 black sharecroppers in 1946 is focus of court battle over grand jury secrecy. By The Associated Press

A historian’s quest for the truth about a gruesome mob lynching of two black couples is prompting a U.S. appeals court to consider whether federal judges can order grand jury records unsealed in decades-old cases with historical significance. Read more

Cities with more black residents rely more on traffic tickets and fines for revenue. By Akheil Singla / The Conversation

First, policing for profit via civil asset forfeiture and traffic tickets is, unfortunately, a documented phenomenon that alters police behavior. Second, studies persistently find that minority residents and communities of color are more common recipients of law enforcement action and punishment. And third, government agencies that are more representative of their communities along gender and racial dimensions have been demonstrated to reduce unfavorable outcomes for minority groups across many studies. The only thing we did was show that these things are all connected. Read more

NBA salaries have skyrocketed in recent years, but the biggest stars have earned more off the court than on it to this point in their careers. LeBron James, who tops the ranking for the 2019-2020 season, has made more than twice as much from endorsements than his $270 million in playing salary over his first 16 years. Kevin Durant’s on-court earnings of $187 million in 12 seasons is dwarfed by his current ten-year, $275 million Nike deal. Read more

Nicholas Buccola’s “The Fire Is Upon Us” is both a dual biography of Buckley and Baldwin and an acute commentary on a great intellectual prizefight. Baldwin and Buckley were, to put it mildly, from opposite sides of the tracks. Enshrined on YouTube and in countless documentaries, the Baldwin-Buckley debate remains an uncanny exchange. Read more