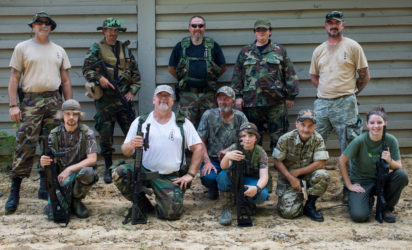 Trump, facing impeachment by the House over the Ukraine-Biden affair, tweeted comments made on Fox News by the evangelical pastor Robert Jeffress that the president’s removal “will cause a Civil War like fracture in this Nation from which our Country will never heal.” Heather Cox Richardson, a history professor at Boston College who is an expert in 19th century America, laid out on Twitter what she described as the “eerily similar” parallels after Trump’s controversial civil war tweets. “The parallels between the consolidation of elite slaveowners’ power from 1830-1860 and the rise of Movement Conservatives from 1954-2019 are eerily similar,” Richardson said, remarking that they both took power by “denigrating black Americans.” Must read Also see, Trump’s Tweet About Civil War Was Just What the Far Right Oath Keepers Wanted to Hear And see, The Far Right’s Apocalyptic Literary Canon And see, Robert Jeffress Goes All In on “Civil War”

Historian Matthew Clavin has written a book about that last aspect of Jackson’s career, “The Battle of Negro Fort: The Rise and Fall of a Fugitive Slave Community.” Salon spoke with him about his thoughts on Jackson’s legacy and what it can tell us about the current president. I started this book a good decade ago. However, as Donald Trump rose to power … actually, when he became president and put the portrait of Andrew Jackson on his wall in the White House, it became very clear to me my audience might be interested in knowing a little more about the guy that Donald Trump put so high on a pedestal. There’s definitely a connection I’ve made as the book has come to fruition. Read more

Rumors of War” is an enormous — 27 feet high, 16 feet wide — statue of, yes, a man on a horse. But this one has his hair in dreadlocks and is dressed in ripped jeans and a hoodie. Created by artist Kehinde Wiley, who painted President Barack Obama’s iconic presidential portrait, the monumental work is meant to serve as an invitation to question our collective history and its heroes. Read more

Jeromy Brown, a 46-year-old teacher in Iowa, considers President Trump a white supremacist. Brown, like many white liberal voters, appreciates that some Democratic presidential candidates have begun explicitly referring to Trump as a white supremacist. His top choice, Warren, told The NPR Politics Podcast in August that “when the white supremacists call Donald Trump one of their own, I tend to believe them.” Read more

How the Fed Is Trying to Fix Its White Male Problem. By Jeanna Smialek / NYT

The Federal Reserve’s research staff is far less diverse than the American population it is meant to serve, a reality that the central bank is trying to change as a reckoning over inclusion sweeps through the economics profession. Three in four Fed economists are men and a majority of those are white. That matters beyond optics: Varied backgrounds can help the Fed better understand the people its policies are meant to help, from working mothers to the underemployed. Read more

The MacArthur Foundation announced its “genius” grant winners Sept. 25. Formally known as MacArthur Fellows, this year’s recipients are artists, writers, scientists and academics who have demonstrated “extraordinary originality and dedication in their creative pursuits and a marked capacity for self-direction.” Out of the 26 fellows in the 2019 class, five are African American: Pictured is Emmauel Pratt an urban designer who lives and works in Chicago. MacArthur Fellows receive $625,000 over five years.  Read more

Warren gets ‘dramatic shift’ in support from black voters. By Maya King / Politico

One element of Elizabeth Warren’s surge in the polls is likely to strike fear in her top Democratic rivals — her rising support among African Americans. After struggling to win over black voters in the early stages of the primary, the Massachusetts senator appears to be gaining ground with a demographic that will play a pivotal role in determining the nomination. Read more

Black Workers Are the Heartbeat of the GM Strike. By Eli Day / Mother Jones

Right now the country’s most high-profile contract negotiations are underway in an iconically working-class profession. Those negotiations are being jammed up over the status of the most vulnerable, disposable class of workers—workers who tend to be Black and Brown. The GM picket line offers a glimpse of the new working-class arrangement, and it calls to mind a different sort of struggle, against a different set of “tiers.” Today’s fight for workplace equality doesn’t look all that different from yesterday’s fight for social equality. Read more

Ex-Dallas Officer Who Killed Man In His Own Apartment Is Found Guilty Of Murder. By Bobby Allyn / NPR

A Dallas jury has found former police Officer Amber Guyger guilty of murder for fatally shooting a neighbor who lived in the apartment directly above hers last year. She had testified that she entered Botham Jean’s unit after a long day at work, thinking it was her own home and that he was an intruder. The jury took five hours to decide Guyger had committed murder, rather than a lesser charge of manslaughter. Read more

If You Are Black and in a Mental Health Crisis, 911 Can Be a Death Sentence. By Shaun King / The Intercept

Over the past five years, I’ve closely studied thousands of police shootings and seen a trend of black families under duress calling 911 during a mental health emergency, only for their loved one to be killed by police as a result. Read more

Harvard Does Not Discriminate Against Asian-Americans in Admissions, Judge Rules. By Anemona Hartocollis / NYT

A federal judge on Tuesday rejected claims that Harvard had intentionally discriminated against Asian-American applicants, in a closely watched case that presented one of the biggest legal challenges to affirmative action in years. Read more Also see, Read: Judge’s ruling in Harvard affirmative action case

The Cult of Rich-Kid Sports. By Derek Thompson / The Atlantic

On Tuesday, a federal judge held that Harvard’s admissions policy does not violate the Civil Rights Act. But a new paper by several economists, including one directly involved in the trial, provides stark evidence that Harvard does give preferential treatment to affluent white applicants through legacy preferences and sports recruitment. Read more

N.C.A.A. Athletes Could Be Paid Under New California Law. By Alan Binder / NYT

It has been a bedrock principle behind college sports: Student-athletes should not be paid beyond the costs of attending a university. California threatened that standard on Monday after Gov. Gavin Newsom signed a bill to allow players to strike endorsement deals and hire agents. Read more

It’s everything he brought to the game,” Rice said of Brown, who earned eight all-pro nods in nine seasons. “He didn’t play as long (as other running backs), but he had the speed and physicality, and it’s just the way he played the game.” Read more

Isaac Hayes’s legacy remains elusive. Even now, over a decade after the singer’s death, there is still no biography of him. Younger fans might remember him chiefly as the voice of Chef on “South Park,” while older ones might picture Hayes in his prime: as the voice of the hypermasculine Shaft, or the sultry Casanova who seduced fans with songs about heartache and fathered fourteen children. Read more

Discovering Cuba, an Island of Music. By Shannon Sims / NYT

Just an hour’s flight from the United States, Cuba is drenched in music. You hear it everywhere, emanating from bars or homes or religious ceremonies. For many visitors, Cuban music is defined by the traditional sounds of the Buena Vista Social Club or Celia Cruz. But Cuban music stretches far beyond those sounds; its roots draw on Africa and Haiti, France and Spain. Genres come together and break apart, like flocks of starlings at dusk, endlessly forming new shapes and sounds. Read more