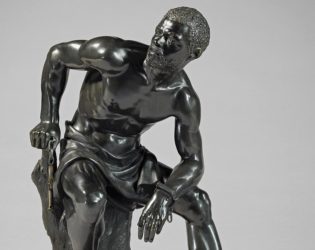 In Rethinking Rufus: Sexual Violations of Enslaved Men, historian Thomas Foster examines how the conditions of slavery gave rise to sexual violence against enslaved men in the Americas during the eighteenth and nineteenth centuries. Drawing from historical studies of sexual violence against enslaved women, Foster uses a range of sources including early American newspapers, enslavers’ journals, court records, visual art, and abolitionist literature to illuminate how various forms of sexual violence, including physical assault and coerced reproduction, affected enslaved men and their communities. Read more

Nearly 75% of African Americans support reparations for slavery. Only 15% of white Americans do, a poll says. By Scottie Andrew / CNN

Slavery is a horrific, irremovable stain on US history. But Americans disagree on how to handle its legacy. While nearly 75% of black respondents in an AP-NORC Center for Public Affairs Research poll said they believe the US government should pay reparations to the descendants of enslaved black people, just 15% of white participants supported the idea. Overall, about 29% of the people questioned support reparations, or payment to African Americans whose family members were slaves, according to the poll conducted in September of nearly 1,300 black, white and Hispanic Americans. Read more

Among elite U.S. universities, Harvard, Yale, Brown, and Georgetown have all admitted in recent years that at one time they benefited financially from the slave trade. But two Protestant seminaries have now gone a step further, saying that in recognition of their own connections to racism they have a Christian duty to pay reparations. Read more

Elijah Cummings: We are in a fight for the soul of our democracy. By Elijah E. Cummings / Wash Post

Elijah E. Cummings, a Democrat, represented Maryland’s 7th Congressional District until his death Oct. 17. This op-ed is adapted from a foreword that Cummings wrote July 17 for the forthcoming book, “In Defense of Public Service: How 22 Million Government Workers Will Save Our Republic,” by Cedric L. Alexander. Read more

Trump has united different Latino generations on one thing — voting him out. By Gwen Aviles / NBC News

Most recent polls find a solid majority of Latinos — about 7 in 10 voters — do not favor Trump. About half of Latinos say the situation for U.S. Hispanics has worsened since Trump took office and almost 60 percent of respondents said they were worried that a family member or a close friend could be deported, according to a 2018 survey by the Pew Research Center. Read more

Democrats Have the Most Racially Diverse Field Ever. The Top Tier Is All White. By Astead W. Herndon and Jonathan Martin / NYT

When the Democratic primary contest began last winter, it featured the most racially diverse field in history, with two black senators, a Latino former cabinet secretary, an Asian-American businessman and the first American Samoan elected to Congress. But 10 months later, the Democratic field has a top tier of four white candidates, three of them men. Read more

Within hours of Donald Trump’s election, Democrats started pointing fingers — quite often at black voters. Had they turned out in key states as they did for Barack Obama, the argument went, Trump would have been denied the White House. But in battleground states such as Wisconsin, Pennsylvania and Michigan — which all flipped to vote for Trump after decades of backing the Democratic presidential nominee — the task of doing something about it has often fallen on local activists such as Angela Lang executive director of Black leaders Organizing for Communities. Read more

A state court ruled on Monday that the map, which is skewed in Republicans’ favor, likely violates the North Carolina Constitution and may not be used in the 2020 election. The only question now is how long Republicans hem, haw, and dawdle before conceding defeat and redrawing the illegal districts. Importantly, Republicans will not be permitted to stall past the election; the court made clear that it will delay the 2020 primaries to guarantee a lawful election. Read more

Former first lady Michelle Obama told a crowd at the Obama Foundation Summit at the Illinois Institute of Technology that white people moved out of the neighborhood she and her family moved into as a child. “We were doing everything we were supposed to do—and better,” Obama said, according to The Chicago Sun-Times. “I wanna remind white folks that y’all were running from us. This family with all the values that you read about, you were running from us and you’re still running.” Read more

The FBI Spends a Lot of Time Spying on Black Americans. By Alice Speri / The Intercept

The FBI has come under intense criticism after a 2017 leak exposed that its counterterrorism division had invented a new, unfounded domestic terrorism category it called “black identity extremism.” Since then, legislators have pressured the bureau’s leadership to be more transparent about its investigation of black activists, and a number of civil rights groups have filed public records requests to try to better understand who exactly the FBI is investigating under that designation. Read more

Conyers represented Detroit through some of the most difficult years in its history, a time in which the woes of the American auto industry caused the city to go into a steep economic decline. But along with John Dingell Jr., who died earlier this year at the age of 92 having served 59+ years in Congress, he gave Michigan seniority — and two powerful voices on Capitol Hill. Read more

Whose Side Is Clarence Thomas On. By Randall Kennedy / The Nation

Appointed 28 years ago, Clarence Thomas holds the honor of having held a seat on the Supreme Court longer than any of the other current justices. He is also the nation’s second African American justice, having succeeded the first, Thurgood Marshall, in 1991. Born in Pin Point, Georgia, in 1948, Thomas grew up poor, though not destitute, and in circumstances in which he experienced both anti-black racism and the opportunities pried open by the civil rights movement. Read more

It’s not unusual to cobble together family savings, scholarships and federal loans to pay for college. What is less common: a loan to the parents of the students. The Parent PLUS Loan provides funds to parents with only a minimal check to see if they have the means to repay it. Among families of color, the loan is much more common – and those families are more likely to be dragged into indebtedness. Parent PLUS Loans have particular disadvantages. They have higher rates of interest compared with direct loans: 7.1% and 4.5%, respectively; they are not linked to income-based repayment; they tend to leave older Americans paying well into their retirement years. Read more

NCAA takes steps to allow college athletes to cash in on their fame. By David K. Li. / NBC News

The governing body for college sports on Tuesday took the first steps toward allowing its athletes to monetize their fame — and perhaps end more than a century of hard-line codes on amateurism. The National Collegiate Athletic Association’s Board of Governors, meeting at Emory University in Atlanta, voted unanimously to begin a process that would let college athletes to “benefit from the use of their name, image and likeness.” Read more

Harriet Tubman Facts and Myths: How the Movie Tried to Get It Right. By Robert Ito / NYT

For a night, the concert hall of the John F. Kennedy Center for the Performing Arts — home to the National Symphony Orchestra — was a Juke Joint, specifically, Dave Chappelle’s. Sunday evening, a parade of comedy and music luminaries gathered to fete one of the greatest comedians of his generation, who also happens to be a hometown hero. Chappelle, 46, is a graduate of Washington’s Duke Ellington School of the Arts. To mark his accomplishment as this year’s recipient of the Mark Twain Prize for American Humor, the Kennedy Center brought together the two sets of artists Chappelle loves most: comedians and musicians. Read more