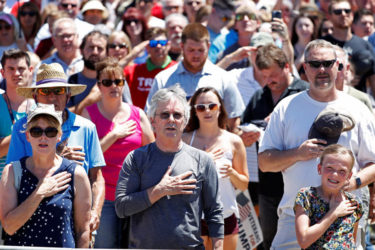 Featured – The Inevitable Whitelash Against Racial Justice Has Started.  By Elie Mystal / The Nation

The use of white fear and white victimhood as potent political weapons is as old as the country itself. Donald Trump is just the latest practitioner of this trade. Read more

What began as marches against police brutality have morphed into a mass mobilization against racial injustice, income equality and police militarization and expansion. Such radical demands may seem surprising in an overwhelmingly White city with a history of racial exclusion. But even though Portland has a population that is 77 percent White, it has long been a center for political organizing where Black and White activists together promoted Black life. This largely invisible history is vital to understanding how the city has recently become a key site for the uprisings and how threatening force is unlikely to curtail them. Read more

Related: The president must condemn those responsible for violence and disavow those who act in his name. Easy, right? By Jamelle Bouie / NYT

Trump and his allies are redefining right-wing violence as “self-defense”: That’s a dark path. By Amanda Marcotte / Salon

On Monday afternoon, after days of encouraging right-wing aggression on Twitter against the largely peaceful Black Lives Matter protesters, Trump gave a press conference in which he upped the ante by defending Kyle Rittenhouse, the 17-year-old who apparently shot three people, killing two of them, during a weekend protest in Kenosha, Wisconsin. Trump’s claim? It was self-defense. “I guess it looks like he fell and then they very violently attacked him,” the president said, adding that Rittenhouse “probably would have been killed” had he not shot the protesters, though, in standard Trump fashion, he hedged the whole thing by noting that the shootings are “under investigation.” Read more

Related: With Itchy Trigger Fingers, Some Right Wingers Predict The Next Civil War Has Finally Arrived. By Matt Shuham / TPM

Early on in “Narrative of the Life of Frederick Douglass,” the first of three autobiographies Douglass wrote over his lifetime, he recounts what happened—or, perhaps more accurately, what didn’t happen—after his master, Thomas Auld, became a Christian believer at a Methodist camp meeting. Douglass had harbored the hope that Auld’s conversion, in August, 1832, might lead him to emancipate his slaves, or at least “make him more kind and humane.” Instead, Douglass writes, “If it had any effect on his character, it made him more cruel and hateful in all his ways.” Read more

The Black Mayors Remaking the South. By Adam Harris / The Atlantic

Since the death of George Floyd, the whole country has been confronting the question: “Do Black lives matter?” The wave of Black Democratic mayors who have swept into southern city halls in the decade since Steve Benjamin became the first Black mayor of Columbia, South Carolina, in 2010—the question has particular political urgency. Those mayors—Keisha Lance Bottoms in Atlanta (shown); Frank Scott Jr. in Little Rock, Arkansas; Randall Woodfin in Birmingham, Alabama; Vi Lyles in Charlotte, North Carolina; Chokwe Antar Lumumba in Jackson, Mississippi; Reed in Montgomery; and others—represent cities with large, and in some cases predominantly, Black populations. Read more

Related: The Future of Black Politics. By Jessica Byrd / NYT

Postmaster General Louis DeJoy’s cost-cutting measures have raised concerns about mail-in voting. But critics worry they may also set the stage for privatizing the U.S. Postal Service, something the Trump administration called for in a 2018 plan to reorganize the federal government. Unions say that could disrupt an important role the Postal Service has played in providing generations of African Americans secure middle class employment. Read more

Despite decades branding itself as a socially conscious company committed to racial equality, McDonald’s knowingly discriminated against Black franchise owners, placing them in economically bereft locations that were destined to fail and depriving them of the same growth opportunities offered to white franchisees, a federal class-action lawsuit alleges. Read more

How Latinos Can Win the Culture War. By Elizabeth Méndez Berry and Mónica Ramírez / NYT

The story about Latinos in America is an old one. And it isn’t true. Created generations ago by whites to demonize Mexicans and then Puerto Ricans, the racist caricature of Latinos as a menacing foreign monolith persists, even as two-thirds of us were born here and we come from more than 20 different countries. While we are everywhere in this country, from big cities to small towns, Latinos are largely missing from American media and culture, which makes us vulnerable. President Donald Trump knows this and exploits these fictions for political gain. Read more

Survivors of the 1921 Tulsa Race Massacre filed a lawsuit Tuesday, demanding that the city “repair the damage” caused by the attack, which historians believe left as many as 300 Black people dead and 10,000 without homes and destroyed 40 square blocks of Greenwood. The lawsuit, which was filed in Tulsa County District Court, claims that the city, the county, the Oklahoma National Guard and other officials caused “a public nuisance” in 1921, when officials failed to defend the Black community from a White mob that descended on Greenwood, a community once so prosperous it was called Black Wall Street. Read more

People of color are disproportionately affected by covid-19. Yet they are underrepresented in vaccine trials. By Karen Bass / Wash Post

Six months into our battle against covid-19, the disease has killed more than 181,000 Americans, and the pandemic continues to disproportionately affect communities of color. Black Americans, Latinos, Asian Pacific Islanders and Native Americans are significantly more likely than White Americans to be diagnosed with covid-19, be hospitalized over it and die of the disease. Despite these appalling trends, the most promising covid-19 vaccine trials are reportedly failing to recruit participants of color. Read more

The lack of Black officers in the Army’s combat commands has diminished the chances for diversity in military leadership for years to come, resulting in a nearly all-white leadership of an increasingly diverse military and nation. The Army, the largest of the armed services, has made little progress in promoting officers of color, particularly Black soldiers, to commands in the past six years, a USA TODAY analysis found. Read more

Related: The Few, the Proud, the White: The Marine Corps Balks at Promoting Generals of Color. By Helene Cooper / NYT

How Minneapolis re-segregated its schools and set the stage for a national crisis. By Erin Einhorn and Nigel Chiwaya / NBC News

In the last decades of the 20th century, the Twin Cities were seen as a model of racial and economic integration, celebrated as a place where state laws and local initiatives created some of the most far-reaching school and neighborhood integration programs in the nation. Those efforts didn’t stamp out racism, said Helen Bassett, 70, a Black school board member in the suburban Robbinsdale Area school district near Minneapolis. But they gave people a way to better understand one another, “to relate to them on the basis of human decency.” Today, however, the programs are mostly gone. Read more

The History of Black College Football. By Joshua Crutchfield / AAIHS

In Blood, Sweat, and Tears: Jack Gaither, Florida A&M, and the History of Black College Football, Derrick White argues that by examining the history of football at Florida Agricultural and Mechanical University (FAMU) and their coach, Alonzo “Jack” Gaither (shown), one is able to trace the development of Black college football and the emergence of its Golden Age. Central to White’s argument is the critical distinction between football programs at HBCUs and PWIs. Read more

NFL will stencil in end zone ‘It Takes All of Us’ and ‘End Racism.’ By Allen Kim / CNN

The NFL, which until recently had restricted its players from protesting on the field for social change, is going all in for the 2020 season. Commissioner Roger Goodell in a call on Tuesday walked members of the media through a series of social justice initiatives the league has planned, including helmet decals, a voter activation push and phrases stenciled in the end zones. Read more

Kentucky’s Rupp Arena: A College Basketball Mecca With A Complicated Racial Past. By Becky Sullivan / NPR

Over his entire career at Kentucky, Adolph Rupp coached just a single Black player, beginning with his first season in 1930 through his retirement in 1972. Even in the segregated South, Rupp’s record stands out from his peers in high-power college basketball. A list of demands from the school’s African-American and Africana Studies faculty has brought new life to an old debate about the name of the school’s basketball arena. Read more

The first Black coach to lead a team to the N.C.A.A. men’s basketball championship, he helped mold N.B.A. stars like Patrick Ewing and Allen Iverson at Georgetown University. Thompson kept a deflated basketball in his office to help his players realize that they need to prepare themselves for life after their athletic careers. Georgetown has said that of the 78 players who played four seasons under Thompson, 76 received their degrees. Read more

Sony Music has announced a six-LP vinyl set for Sade titled So Far, featuring remastered versions of all of the band’s studio albums to date: Diamond Life (1984), Promise (1985), Stronger Than Pride (1988), Love Deluxe (1992), Lovers Rock (2000) and Soldier Of Love (2010). The vinyl set, which is now available for preorder, is the first complete collection of Sade’s studio work ever released. Read more