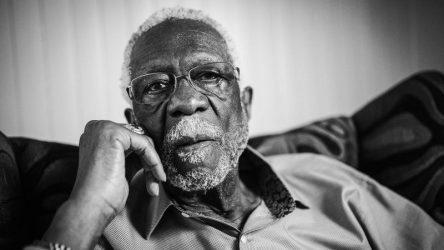 Featured – Racism Is Not a Historical Footnote. By Bill Russell / The Players Tribune

Racism in America doesn’t simply affect Black and Brown people. It seeps into American institutions, shows, music, news, sports and minds. We can’t change America’s foundation, but we can reckon with it. Or, we can continue (as we have for hundreds of years) claiming to be the land of the free, when it’s clear that the sentiment only applies to white people. Without justice for all, none of us are free.  Read more

Race, policing, and the universal yearning for safety. By Ezra Klein / Vox

Phillip Atiba Goff is the co-founder and CEO of the Center for Policing Equity, as well as a professor of African American studies and psychology at Yale University. At CPE, Goff sits atop the world’s largest collection of police behavioral data. So he has the evidence, and he knows what it tells us — and, just as importantly, what it doesn’t even attempt to measure. He knows what we can say with confidence about race and policing, and what we wish we knew but simply don’t. He thinks in systems, in contexts, in uncertainty — in the bigger, harder picture. Read more

Trump escalates the signals to his followers: Use lethal violence to help me hold power. By Amanda Marcotte / Salon

Well, that escalated quickly. Only a couple of weeks ago, Donald Trump and his allies were using the term “self-defense” to condone the behavior of armed right-wingers who showed up at Black Lives Matter protests to intimidate demonstrators — and also to justify the alleged murder of two protesters in Kenosha, Wisconsin, by 17-year-old Kyle Rittenhouse. Now Trump has expanded the universe of excuses for such lethal violence, suggesting that it’s acceptable in the name of “retribution.” Read more

Related: Trump Instigates ‘Lock Him Up’ Chant For Obama At Rally. By Mary Papenfuss / HuffPost

QAnon is a Nazi Cult, Rebranded. By Gregory Stanton / JustSecurity

A secret cabal is taking over the world. They kidnap children, slaughter, and eat them to gain power from their blood. They control high positions in government, banks, international finance, the news media, and the church. They want to disarm the police. They promote homosexuality and pedophilia. They plan to mongrelize the white race so it will lose its essential power. QAnon true believers think Donald Trump will rescue America from this Satanic cabal. At the time of “The Storm,” supporters of the cabal will be rounded up and executed. Read more

Trump has Latino voter support that’s as strong as ever. Why haven’t his insults cost him? By Luisita Lopez Torregrosa / NBC News

Among the many unsavory details in “Disloyal: A Memoir,” a new book by President Donald Trump’s former personal lawyer and fixer Michael Cohen, is his recollection of Trump’s unvarnished views of Latino voters. “I will never get the Hispanic vote,” Cohen recalls Trump as saying when he was a presidential candidate in 2016. “Like the blacks, they’re too stupid to vote for Trump.” It’s no surprise, then, that many Latinos don’t plan to vote for Trump in November. What may be a surprise is how many do. Read more

Related: Which Party Represents the Racial Future? Right now, it’s not the Republicans. But a Hispanic swing toward Trump hints at a more unsettled future. By Ross Douthat / NYT

White evangelicals and Catholics may finally be opening their ears. By Michael Gerson / Wash Post

An August Fox News poll found support for Joe Biden among White evangelicals at 28 percent — significantly higher than the 16 percent who supported Hillary Clinton in 2016 exit polls. A recent Vote Common Good survey indicated an 11 percentage point shift toward Biden among evangelicals and Catholics who supported Donald Trump in 2016. These surveys are not evidence of collapsing approval for Trump among these groups, but they may signal an erosion of support. And Trump can’t afford to lose any ground among the base of his base. Read more

In the latest results released Wednesday, the NPR poll found that 72% of Latino households around the country report they’re facing serious financial problems, double the share of whites who say this. And 46% of Latino households reported they have used up all or most of their savings during the pandemic. Read more

A detailed look at COVID-19 deaths in U.S. kids and young adults released Tuesday shows they mirror patterns seen in older patients. The report examined 121 deaths of those younger than 21, as of the end of July. Like older adults, many of them had one or more medical condition — like lung problems, including asthma, obesity, heart problems or developmental conditions. Deaths were also more common among those in certain racial and ethnic groups, according to the report from the Centers for Disease Control and Prevention. The CDC found 54 were Hispanic, 35 were Black, and 17 were white, even though overall there are far more white Americans than Black and Hispanic. Read more

Why the stability of the 2020 race promises more volatility ahead. By Ronald Brownstein / CNN

In a presidency of unprecedented disruption and turmoil, Donald Trump‘s support has remained remarkably stable. That stability, paradoxically, points toward years of rising turbulence in American politics and life. Trump’s approval ratings and support in the presidential race against Democratic nominee Joe Biden have oscillated in a strikingly narrow range of around 40%-45% that appears largely immune to both good news — the long economic boom during his presidency’s first years — and bad. Read more

White Workers Are Getting Hired Back Twice As Fast As Black Workers. By Emily Peck / HuffPost

A federal appeals court will hear a long-running challenge to college affirmative action policies on Wednesday, nearly six years after the case against Harvard began and as America confronts intensifying racial divisions. The lawsuit was initiated on behalf of Asian Americans by a conservative advocate who has long opposed racial policies that have primarily benefited Blacks and Hispanics. The US Department of Justice joined the lawsuit, siding with the challengers to Harvard, after President Donald Trump took office. Read more

Legal advocates are lining up on both sides of actor Bill Cosby’s appeal as the Pennsylvania Supreme Court prepares to review his 2018 sex assault conviction. Cosby was the first celebrity to go on trial in the #MeToo era, and his appeal could resolve lingering questions about how the cases should be tried. For starters, the high court will try to clarify when other accusers can testify against a defendant — and when the additional testimony amounts to character assassination. Read more

Calling Breonna Taylor a “light to help heal what’s happening in America,” attorneys and Louisville city officials on Tuesday unveiled a $12 million settlement for her family that includes a host of police reforms. The payout — announced six months after Taylor, 26, was fatally shot in her apartment March 13 — is the largest ever on behalf of Louisville police, dwarfing a previous $8.5 million settlement from 2012 when Edward Chandler was falsely sent to prison for nine years. It is also among the largest payouts in the U.S. for the shooting of a Black American by police. Read more

Former Florida gubernatorial candidate Andrew Gillum came out as bisexual in an interview with Tamron Hall that aired Monday, six months after he was found inebriated and vomiting in a Miami hotel room. Paramedics and police officers responding to a call about a possible drug overdose in that hotel room found crystal meth when they arrived. A male sex worker was there, too. In a long, almost entirely somber interview, Gillum told Hall he’s “cried every day” since that March incident. “What was most hurtful was this belief that I was somehow living a lie in my marriage and in my family,” he said. Read more

In a year where it seems like every facet of life is going through a massive shift, musician and actor Janelle Monáe is front and center as a voice for that change, especially in her new film Antebellum, available on-demand on major cable and digital platforms September 18.”I want this to be a real look at the burden that Black women carry every single day to deconstruct systemic racism and to deconstruct white supremacy.” Monáe plays Veronica Henley, a successful writer trapped in a terrifying reality mirroring America’s original sin: slavery. “One of the things that this film says is that the past is not even the past.” Read more

The Patti LaBelle vs. Gladys Knight ‘Verzuz’ was made special by the music and our memories. By Mikki Kendall / NBC News

If you are too offline to know what “Verzuz” is, or too young to understand why everybody has been raving about Patti LaBelle and Gladys Knight on social media this weekend, let me help you out (sort of). You missed one of the greatest, possibly defining, cultural events of the pandemic era because you decided Instagram had too many ads and you thought, what, the women who helped define the R&B genre are “old people” music? Read more

Naomi Osaka’s hair doesn’t matter. At least not when it comes to her 120 mph serve, her daunting forehand or her powerful baseline play. But it does matter in terms of how she shows up in the tennis world and how she’s emerged as one of the most prominent athletes supporting the Black Lives Matter protests. On Saturday, Osaka defeated Victoria Azarenka to claim her second U.S. Open singles title and third Grand Slam title. Read more

Colin Kaepernick, who’s been unsigned by the NFL for years after protesting racial injustice on the field, called out the league Sunday for hypocrisy in appearing to champion Black lives while still not signing a player who kneeled with him. The activist and ex-San Francisco 49ers quarterback used the opening weekend of pro games to say that the NFL participates in what he considers performative activism for racial justice, given that safety Eric Reid remains unsigned. Read more