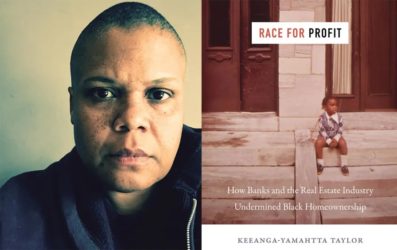 Featured – Keeanaga-Yamahtta Taylor Says There Is No Housing Crisis: ” It’s Just Housing Under Capitalism. By Nawal Arjini / The Nation

Taylor’s new book, out in October, is, Race for Profit: How Banks and the Real Estate Industry Undermined Black Homeownership (Justice, Power, and Politics), and last week it was long-listed for the National Book Award. It details the relationship between private industry and the federal government as they create crisis after crisis among black homeowners—sometimes inadvertently, sometimes not. Discrimination and horrendous housing conditions for black people are not evidence of a crisis within this public-private partnership, she argues; rather, they are its foundation. Read more

The reach of late Republican gerrymandering mastermind Thomas Hofeller may be longer than previously known, according to a review of thousands of documents and emails culled from his hard drives, obtained by The Intercept. While Hofeller was known for drawing maps to give Republicans an advantage and to limit the impact of voters of color in North Carolina, Texas, Missouri, and Virginia, the new documents reveal he also participated in the 2010 redistricting cycle in Alabama, Florida, and West Virginia. Read more

Mississippi: African American voters sue over election law rooted in the state’s racist past. By Gideon Cohn-Postar / The Conversation

A lawsuit over a Mississippi election law, if successful, will change the way that state elects its governor. Four African Americans filed the federal civil rights lawsuit in May 2019, charging that the way their state elects its statewide officials violates the Voting Rights Act, the 14th Amendment and the principle of “one-person, one-vote.” To win election, a candidate for governor of Mississippi has to win an outright majority of the popular vote – and win a majority of the state’s 122 House districts. If no candidate does both, the state House gets to select the next governor, regardless of who got the most votes. No African American has been elected statewide since 1890. Read more

Chokwe Antar Lumumba: Being a Radical Means Getting to the Root Causes of Injustice. By John Nichols / The Nation

Jackson, Mississippi Mayor Chokwe Antar Lumumba has a vision that distinguishes him from most elected officials in the United States, even from most progressive elected officials. He is not afraid of the world radical, in fact he relishes discussions about what it means to go to the root of challenging issues, to identify the sources of injustice, and to address them. Read more

Anna Clark is the author of “The Poisoned City: Flint’s Water and the American Urban Tragedy. “When it comes to water, you’d think the cities of the Great Lakes would be the envy of the country. In a time of scorching drought and climate change, the northern coast is a place of abundance. The lakes hold an astounding 84 percent of all the surface freshwater in North America. But even here, we struggle to deliver safe, affordable drinking water to millions of people, often communities of color. Throughout the region, these low-income neighborhoods face high water bills, contamination risks and large-scale shut-offs — all the manifestation of a history that many would like to forget. Read more

Carol Anderson is the author of the critically acclaimed book “White Rage,” and Is the Charles Howard Candler Professor and Chair of African American Studies at Emory University. Watch here

The arrest of a black six-year-old girl exposes the rotten heart of US policing. By Arwa Mahdawi / The Guardian

A black six-year-old girl called Kaia Rolle had a temper tantrum at her school in Florida last week and kicked a staff member. While that may not be ideal behaviour, she is six. Not exactly a hardened criminal, is she? Well, a school resource officer (a trained police officer who works in a school) called Dennis Turner would beg to differ. Turner handcuffed Kaia and arrested her on a battery charge. Turner also arrested a six-year-old boy in another, unrelated, incident on the same day. Read more

Poll finds support for school busing to reduce segregation, but only among Democrats. By Llaura Meckler and Scott Clement / Wash Post

A majority of Americans remain opposed to busing children to racially integrate schools. But opposition is not as fierce as it once was because of growing acceptance among Democrats, according to a Gallup survey released Tuesday. The poll found a deep partisan divide on busing and on the extent of racial segregation in schools, with Democrats more than twice as likely as Republicans to call it a serious problem. Read more

American Jews and American Muslims Have a Common Antagonist. By James Ron and Howard Lavine / NYT

President Trump seeks to drive a wedge between American Jews and the Democratic Party. He claims that the Republican Party is more concerned with protecting Jewish people at home and abroad. He also wants to stoke tensions between American Jews and American Muslims. Our survey research, however, indicates that the biggest threat to the rights of the Jewish people comes from homegrown American nativists. These people dislike all manner of groups they view as foreign to this country and our research shows that they are even more vehemently opposed to Muslims than they are to Jews. Read more

43 Percent of White Students Harvard Admits Are Legacies, Jocks, or the Kids of Donors and Faculty. By Jordan Weissmann / Slate

This month, a group of researchers have delivered a sobering look at how affirmative action works for affluent whites at America’s most prestigious university. From 2009 until 2014, the paper “Legacy and Athlete Preferences at Harvard” finds, 43 percent of the Caucasian applicants accepted at Harvard University were either athletes, legacies, or the children of donors and faculty. Only about a quarter of those students would have been accepted to the school, the study concludes, without those admissions advantages. Read more

All college students should take a mandatory course on black history and white privilege. By Emily Walton / USA Today

There’s a graduation requirement I’d like every college and university to adopt, just like math or writing. All students should take an accessible course on race and ethnicity if racial equity is to be an achievable goal. As a sociology professor at Dartmouth College, I teach such a class, and it is at once exhausting and exhilarating. It is not easy to learn about, let alone talk about, racism. In the course, we learn how the very idea of race was invented with colonialism — but even 400 years after the start of slavery in America, race still exerts a powerful influence on life chances, working through institutions like higher education, the criminal justice system and the labor market. By the end of the term, students have a deep understanding of these complex social problems, and realistic ideas for how to make change through our relationships and institutions. Read more

Investigators are looking into whether a hostile work environment existed – particularly for African American employees – at the City of Virginia Beach leading up to a deadly mass shooting on city property earlier this year.They also want to know whether such an environment might have contributed to the shooting that killed a dozen victims at the Virginia Beach Municipal Center on May 31, according to a report presented to city council members on Tuesday night. The meeting was held at the same complex of buildings where the shooting took place. The shooter, a public utilities engineer, was African American, and both black and white colleagues were among his victims. Read more

The award-winning author on her mission to diversify publishing — and why she turned back to adult readers with her new novel, “Red at the Bone.” She had also been jotting down notes about the Tulsa Massacre of 1921 — two days of violence in which a mob of white Oklahomans attacked and burned what was then one of the wealthiest black communities in the United States, killing as many as 300 people. Woodson has woven both threads into her latest book, “Red at the Bone,” published this month. Read more

John Mitchell fought segregation at Alabama and made football history. By David Steele / The Undefeated

Those who are too young to remember when Paul “Bear” Bryant and Alabama ruled college football are likely also too young to remember when Jim Crow’s grip on the state was even stronger. John Mitchell and the first generation of African American football players at the University of Alabama remember it well. Mitchell was Bryant’s first black player, black All-American, black captain and black assistant coach, and to the average fan outside of Alabama, this all tends to come as a surprise. Read more

The Centrality of Whiteness in Modern Sports. By Jermaine Scott / AAIHS

Modern sport is racial. This statement has become obvious with the recent protests in the NFL, NBA, and WNBA around structural anti-Black racism and police brutality. What is less evident are the ways that whiteness and white athletes are privileged and protected in sports as a way to reinforce the anti-Black racism that exists in US society. This is the task taken up by David J. Leonard in his important text, Playing While White: Privilege and Power On and Off the Field. Leonard, a Professor of Comparative Ethnic Studies and American Ethnic Studies at Washington State University, has contributed yet another critical study to his already important body of work on race, sports, and gender, this time interrogating the role of whiteness in our daily consumption of sports. Read more