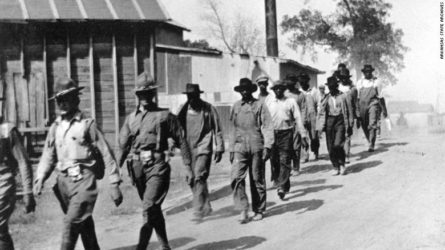 One hundred years ago, Kyle Miller’s great uncles were shot and killed passing through Elaine, Arkansas, on their way home from a hunting trip. They were among the hundreds of black people murdered in the first days of October 1919 by white mobs and government troops who poured into the small farming community on the Arkansas Delta after false rumors of an uprising by black sharecroppers. This week, Miller and other members of the Elaine Massacre Memorial board will unveil a monument in Helena, Arkansas, to commemorate the killings. Read more  Also see, The Forgotten History of America’s Worst Racial Massacre

Red and Blue Voters Live in Different Economies. By Thomas B. Edsall / NYT

The average of Democratic district’s gross domestic product grew from $35.7 billion in 2008 to $48.5 billion in 2018, an inflation-adjusted average increase of 35.9 percent. In Republican districts, G.D.P. fell from an average of $33.3 billion to $32.6 billion over the same decade, a 2.1 percent decline. Similar trends are reflected in education, household income and productivity patterns. Read more

Biden is leading in South Carolina, but Warren supporters hope a focus on the state — plus her education and child care plans — can win over African Americans. Read more

The project was a collaboration between Ian Haney López, author of “Dog Whistle Politics: How Coded Racial Appeals Have Reinvented Racism and Wrecked the Middle Class,” and communications expert Anat Shenker-Osorio, author of “Don’t Buy It: The Trouble with Talking Nonsense about the Economy” (my review here)  and host of the just-launched Brave New Words podcast, with the support of the public policy nonprofit Demos. Read more

“Worth This Investment”: Memos Reveal the Scope and Racial Animus of GOP Gerrymandering Ambitions. By David Daley / The Intercept

In a trove of never before published memos and emails, GOP leaders come clean: Their nationwide advantage in state legislatures and Congress is built on gerrymandering. And top Republican strategists and political operatives admit to weaponizing racial data and the Voting Rights Act in order to flip the South red and tilt electoral maps in their direction. Read more

White evangelicals love Trump and aren’t confused about why. No one should be. By Anthea Butler / NBC News

‘OK’ is now a hate symbol, the ADL says. By Sara Sidner / CNN

The “OK” hand gesture is now a hate symbol, according to a new report by the Anti-Defamation League. The ADL added that symbol along with several others on Thursday to its long-standing database of slogans and symbols used by extremists. Read more

Gov. Larry Hogan is making a “final offer” of $200 million to settle a longstanding lawsuit over disparities in Maryland’s higher education system, his administration said Thursday, a figure far less than half of what the advocates for the state’s four historically black universities have demanded. Read more

Celebrated writer Ta-Nehisi Coates’s first novel, “The Water Dancer,” was released today. Centering on a man named Hiram Walker, who was born into slavery in 19th century Virginia, the novel is a “crowd-pleasing exercise in breakneck and often occult storytelling,” a review in The New York Times stated. We spend the rest of the hour with Ta-Nehisi Coates. Juan González and I spoke to him on Monday when he just came from meeting with Oprah. Listen and watch here

During the Jewish High Holidays, there’s a growing awareness that not all U.S. Jews are white. By Michelle Boorstein / Wash Post

How Harvard admissions can be a barometer of our deepest divides. By Jennifer Lee and Van C. Tran / CNN

A new academic year is underway, and universities nationwide await the verdict in the latest case placing affirmative action on trial. Missing from the current debate is a fundamental question that the plaintiffs chose not to raise: should we treat non-white groups as equally disadvantaged? Alternatively, should we account for the different kinds, degrees and consequences of non-white disadvantage? Asians are divided on this issue. Read more

On the rooftop of a Manhattan strip club in one of the opening scenes of box office hit “Hustlers,” Jennifer Lopez’s character Ramona says to fellow stripper Destiny, portrayed by Constance Wu, “You’re new, you’re gorgeous, you’re Asian — you’re a triple threat.” Before this scene, we get a glimpse into the life of Asian American protagonist Destiny. Read more

In a wide-ranging interview, the star explains why he’s returning to stand-up and the big screen, why he regrets leaving and why it’s hard to watch himself in “Raw” these days. Read more

Overlooked No More: Robert Johnson, Bluesman Whose Life Was a Riddle. By Reggie Ugwu / NYT

Little about the life Robert Leroy Johnson lived in his brief 27 years, from approximately May 1911 until he died mysteriously in 1938, was documented. A birth certificate, if he had one, has never been found. And yet, in the late 20th century, the advent of rock ’n’ roll would turn Johnson into a figure of legend. Decades after his death, he became one of the most famous guitarists who had ever lived, hailed as a lost prophet who, the dubious story goes, sold his soul to the devil and epitomized Mississippi Delta blues in the bargain. Read more