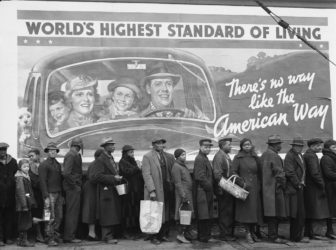 Featured – Straggling in a Good Economy, and Now Struggling in a Crisis. By Patricia Cohen / NYT

An indelible image from the Great Depression features a well-dressed white family seated with their dog in a comfy car, smiling down from an oversize billboard on weary black souls standing in line at a relief agency. “World’s highest standard of living,” the billboard boasts, followed by a tagline: “There’s no way like the American Way.” In the updated 2020 version, lines of cars stretch for miles to pick up groceries from a food pantry; jobless workers spend days trying to file for unemployment benefits; renters and homeowners plead with landlords and mortgage bankers for extensions; and outside hospitals, ill patients line up overnight to wait for virus testing. Read more

And see, The Stimulus Isn’t Enough. By Emily Peck / HuffPost

How the rich reacted to the bubonic plague has eerie similarities to today’s pandemic. By Kathryn McKinley / The Conversation

The coronavirus can infect anyone, but recent reporting has shown your socioeconomic status can play a big role, with a combination of job security, access to health care and mobility widening the gap in infection and mortality rates between rich and poor. The wealthy work remotely and flee to resorts or pastoral second homes, while the urban poor are packed into small apartments and compelled to keep showing up to work. As a medievalist, I’ve seen a version of this story before. Read more

As a clearer picture emerges of COVID-19’s decidedly deadly toll on black Americans, leaders are demanding a reckoning of the systemic policies they say have made many African Americans far more vulnerable to the virus, including inequity in access to health care and economic opportunity. Read more

Who will Trump sacrifice to “reopen America”? That means black bodies. By Sophia Tesfaye / Salon

There is still so much about the coronavirus that we do not know. But one thing we know with saddening certainty — that black communities are disproportionately more likely to die from COVID-19 — seems yet to have received proper credence from those shouting to quickly “reopen America,” or from the elected officials tasked with ensuring safe and secure elections. While neither the virus nor the several state-mandated lockdowns ordered to stop its deadly spread discriminate, it’s time to get specific about just who exactly is being asked to sacrifice their lives and livelihood in our rush to return to normal. Read more

“The numbers are really only a concrete indictment of the leadership of the federal government, the leadership of Donald Trump and the lack of preventative care that African Americans have at all times in this country,” McBride said. “What we are going to do is leverage the existing infrastructure of black religious communities and existing anti-gun violence networks to help the the places and people who need it most. If we don’t, who will?” Read more

Meharry Medical College was founded in 1876 in Nashville, Tennessee, to teach medicine to former enslaved Africans and to serve the underserved. Now, in one of its laboratories, Dr. Donald Alcindor says he is two weeks away from testing an anti-virus to prevent COVID-19, the disease ravaging many African American communities across the country. Read more

Trump and His Allies Are Worried About More Than November. By Jamelle Bouie / NYT

No doubt there is real concern for the economic and health consequences of an extended shutdown. But Republicans, and Trump in particular, are also thinking about November. If the president knows anything, it’s that his fate rises and falls with the state of the economy. But I think there’s another element underlying the push to reopen the economy despite the threat it poses to American lives. Read more

Breaking the Grip of White Grievance. By John A. Farrell / The New Republic

With Biden’s success in the primaries, lines are drawn. The presidential election will likely pit the Democratic herald of a younger, more tolerant, multiracial America against a Republican tribune of white fear and grievance. The outcome is uncertain. Both sides are seething. Read more

America will almost certainly emerge from the coronavirus pandemic as a different society. A new survey suggests the experience has already changed what we believe we owe our neighbors and how much economic inequality we find acceptable. Read more

Also see, Protests are popping up across the US over stay-at-home restrictions. By Dakin Andone / CNN

Fox News host Tucker Carlson claimed Tuesday that former first lady Michelle Obama’s support for mail-in voting could “destroy” American democracy. Obama and When We All Vote, the non-partisan voter registration organization she co-chairs, released a statement Monday arguing that “Americans should never have to choose between making their voices heard and keeping themselves and their families safe. Expanding access to vote-by-mail, online voter registration and early voting are critical steps for this moment — and they’re long overdue.”  Read more

Burtley served as deputy superintendent of Flint Community Schools in 1981 and went on to lead the entire system seven years later. News articles at the time illustrated his passion and focus on community education — namely, to pair minority students with role models and teachers who looked like them. Following retirement in 1994, he became assistant athletic director at Michigan State University before returning to Flint as principal of a K-8 school. Read more

In a lengthy statement posted to Twitter on Thursday, Bubba Wallace, the only African American driver in the NASCAR Cup Series, weighed in on the hottest topic in his sport this week — fellow driver Kyle Larson’s use of a racial slur and the resulting fallout. Read more

A superb new ESPN documentary series reminds us that everything in the NBA legend’s playing career was bent towards a single goal: winning. The Last Dance, the 10-part documentary whose first episodes premiere on ESPN in the US on Sunday (with the worldwide releases for each on Netflix the following day), shows, he was so much more. Read more

Also see, The Inside Story Of How Michael Jordan Became The World’s Richest Athlete. By Kurt Badenhausen / Forbes

From its launch in 1945, Ebony magazine was politically and socially influential. However, the magazine also played an important role in educating millions of African Americans about their past. Guided by the pen of Lerone Bennett Jr., the magazine’s senior editor and in-house historian, Ebony became a key voice in the popular Black history revival that flourished after World War II. E. James West’s fresh and fascinating exploration of Ebony‘s political, social, and historical content illuminates the intellectual role of the iconic magazine and its contribution to African American scholarship. Read more