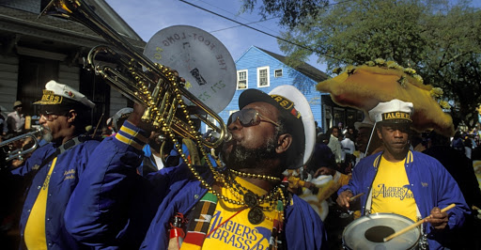 Featured – ‘A Terrible Price’: The Deadly Racial Disparities of Covid-19 in America. By Linda Villarosa / NYT

As Mardi Gras festivities began on Feb 25, bringing over a million visitors from around the world streaming into the warm, welcoming city to celebrate face to face and elbow to elbow with local residents in a progression of street parties and parades, dozens of coronavirus cases had already been documented in China, which reported its first death on Jan. 11. For the Zulu club , a black social organization in New Orleans, Mardi Gras was a joy. The coronavirus made it a tragedy. Read more

For years, Barber has preached about how racism, poverty, voter suppression and the lack of access to health care are all linked. The coronavirus pandemic, especially its disparate impact on African Americans, has forced us to face these fissures in U.S. society. And Barber says the American people are eager to fight back. As for the supporters of President Trump who are fighting back against their states’ stay-at-home orders, Barber told me: “What we need is not guns, we need grace towards each other. We don’t need the flags waving, we need free testing and free health care.” Listen here

Efforts to quickly restart economic activity risk further dividing Americans into two major groups along socioeconomic lines: one that has the power to control its exposure to the coronavirus outbreak and another that is forced to choose between potential sickness or financial devastation. Read more

On March 13, the Trump administration announced its partnership with Walgreens, Walmart, Target, and CVS to provide a portion of their parking lots across the nation for free drive-through testing. The administration asserted that the plan would “meet the needs of the American public,” with Trump emphasizing that “we have many, many locations” and that “we cover very, very strongly our country — stores in virtually every location.” Since the White House announced this “historic public-private partnership,” 63 sites have opened nationwide. Just eight are in black neighborhoods. Read more

Trump Hasn’t Given Up on Divide and Conquer. By Thomas B. Edsall / NYT

This coming November, a great deal depends on whether white Democrats are becoming more liberal while white Republicans are simultaneously becoming more conservative. If white Republicans and white Democrats are moving in opposite directions, as much current research suggests, Trump will retain a constituency receptive — perhaps even more receptive than it was in 2016 — to his racially divisive tactics. Read more

Trump pushes back against Fox News for cutting his “most loyal supporters”: “I love Diamond & Silk.” By Roger Sollenberger / Salon

Here in Virginia, Democrats passed a series of bills before the pandemic hit that will expand absentee voting and eliminate roadblocks that made voting difficult even under normal circumstances. This includes a repeal of the photo-identification law, something more than a dozen states — including many in the South — still have. Virginia also recently enacted automatic voter registration, made Election Day a state holiday and extended poll hours by an hour, which will help reduce crowds. Read more

Why are Florida Republicans trying to keep 1.4 million citizens from voting? By Editorial Board / Wash Post

Harrison’s campaign announced late Wednesday that he’d raised more than $7.3 million from January through March of 2020; Graham, meanwhile, took in only $5.6 million. This is the first time that Harrison has put up higher fundraising numbers than his GOP opponent, though Graham still has roughly $4.8 million more than Harrison on hand. Read more

Julián Castro: Latinos grapple with ‘the worst of all worlds’ amid coronavirus pandemic. By Suzanne Bamboa / NBC News

“Before this virus, our campaign recognized the most vulnerable among us; we aimed a spotlight squarely at their needs,” Castro told NBC News. “This entire COVID-19 experience has strengthened my conviction that we did the right thing.” For Latinos, he said, “the community seems to have the worst of all worlds.” A large share of Latinos are on the front lines as farm workers, nurses, restaurant and services workers that have continued going into work, while Latino small businesses owners are being hurt. Read more

Federal agencies are doing little about the rise in anti-Asian hate. By Alexia Fernandez Campbell and Alex Ellerbeck / NBC News

Researchers are reporting an alarming surge in anti-Asian racism related to COVID-19 that started more than two months ago. From Koreatown in Los Angeles to Greenwich Village in New York City, Asians have been harassed, pushed, spit upon and attacked under the false assumption that they are to blame for the deadly coronavirus. A teenager recently kicked a 59-year-old Asian man in New York City, and a man stabbed two Asian American children and their father at a Sam’s Club in Texas, an incident the FBI called a hate crime.  Read more

For a number of Latino and other minority business owners, larger traditional banks have never been an option for loans. A greater share of Latino business owners are unable to get financing compared to non-Latino, white-owned businesses, much like African American business owners, according to the Stanford Institute for Economic Policy Research.  Read more

A new documentary is promising an in-depth look at Michelle Obama’s post-White House life, picking up where her bestselling memoir left off. Netflix unveiled the first trailer for “Becoming,” due out next month, Monday. In it, the former first lady briefly appears at a community event in Philadelphia, opening up about her experience readjusting to “normal” life outside of the political sphere since her husband, former President Barack Obama, left office. “So little of who I am happened in those eight years,” she explains. “So much more of who I was happened before.” Read more

Rob Morgan excels at playing downtrodden characters. He delivered a breakthrough performance as the beleaguered Hap Jackson in “Mudbound” a few years back, and he gave a scene-stealing turn as the death-row inmate, Herbert Richardson, in the legal drama “Just Mercy,” and recently appeared in the romance “The Photograph,” both available now on demand.  As Abe Turner, a former bull rider in the affecting new drama, “Bull,” Morgan artfully portrays a man struggling to live with dignity in a world that is crushing him. An early shot of Abe, sitting at a kitchen table with his leg outstretched, allows viewers to feel the pain of a body that has been ridden hard and put away wet. Abe is not much better emotionally, having regrets and being forced to make hard choices because of limited opportunities. Read more

‘The Last Dance’ is awe-inspiring. But it has one big problem. By Will Leitch / Wash Post

Jordan has been famously reluctant to sign off on a big project like this — he reportedly only agreed to do this one after LeBron James won a championship for Cleveland and you started to hear more “is LeBron better than MJ?” debates popping up — but now that he has done so, it’s obvious that, as always, he has made sure he is in total control. This is history written solely by Jordan himself. All stories are framed by Jordan’s commentary, and anytime anyone says anything that might upset Jordan, we cut to him growling or rolling his eyes at them. Read more

Stephon Marbury Has His Own Story to Tell. By Vinson Cunningham / The New Yorker

He spent part of a year coming off the bench for the Boston Celtics, then made the surprising choice to play in the Chinese Basketball Association, where he built a new, highly successful life as an expatriate ex-N.B.A.-er. No overseas second act has done so much to change a player’s perception among basketball fans. Marbury eventually won three championship titles with the Beijing Ducks, and has become a kind of national culture hero in China. A statue of him stands in Beijing, outside the arena where he played; he was given the keys to the city; and, after his last game as a professional, the crowd stood and applauded. Some wept. Now, somewhat improbably, given his earlier troubles with management, he is a coach for the Beijing Royal Fighters. Read more