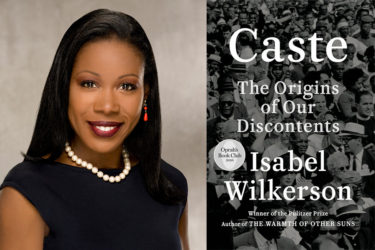 Wilkerson worked for years on her new book, Caste: The Origins of Our Discontents, which grapples with a question that has become all the more relevant in recent months: What does America look like when the myths we tell ourselves about who we are, who we’ve been, and what we’ve created fall away? How should we understand the way the racial hierarchies of our past still shape our present? This is a big conversation, and it’s not always an easy one. But it is one you will not forget. Listen here

St. Louis Couple Is Trump’s Pitch to the Scared Suburbs. By Emma Green / The Atlantic

Mark and Patricia McCloskey appeared at the Republican National Convention to warn that Democrats want to “abolish the suburbs.” Their vision of America is premised on fear—and dominating others. As an accompanying video produced by the RNC panned from crowds of protesters back to the cloistered McCloskeys, the implication was clear: The “criminals” and “mob” are Black, while “honest citizens” are white. Read more

Related: ‘I Fear That We Are Witnessing the End of American Democracy.’ The frank racism of the contemporary Republican agenda is on display at the R.N.C. By Thomas B. Edsall / NYT

Related: Trump Is Happy to Inform Suburban Voters That He Is Still a Racist. By Tessa Stuart / Rolling Stone

The Shooting of Jacob Blake Is a Wake-Up Call. By David A. Graham / The Atlantic

The Kenosha shooting has the dubious distinction of being the first high-profile shooting of a Black man by police since massive Black Lives Matter protests erupted earlier this summer, bringing with them enormous—but potentially ephemeral—shifts in public opinion. So far, those protests have not brought serious changes in how American policing works, which means that for every pious declaration that Breonna Taylor and George Floyd must not have died in vain, there’s certain to be another Jacob Blake. Read more

In the wake of the shooting of Jacob Blake, Los Angeles Lakers forward LeBron James said that the way the police conduct themselves makes him afraid to be a Black man in America. “I know people get tired of hearing me say it, but we are scared as Black people in America,” James said following the Lakers’ Game 4 win over the Portland Trail Blazers on Monday. “Black men, Black women, Black kids, we are terrified.” Watch here

In an election in which the vast majority long ago made up their minds, Democrats and Republicans each opened their conventions fishing for the same group of swing voters, but offering very different lures. Polling by both sides indicates that the crime issue could move some voters — especially older, white voters angered by Trump’s mishandling of the pandemic, but still suspicious of Democrats. Moving enough to matter will be difficult, however, so long as the pandemic dominates voters’ attention. Read more

Related: GOP Wants You to Think Democrats Are Against the Police. By Jamil Smith / Rolling Stone

A Look At The Racial Disparities In How Some Georgia Counties Are Rejecting Mail Ballots. By Tierney Sneed / TPM

Nikki Haley tried to argue the U.S. isn’t racist — but she just proved the opposite point. By Cody Fenwick / Salon

“In much of the Democratic Party, it’s now fashionable to say that America is racist. That is a lie. America is not a racist country.” she said. “This is personal for me. I am the proud daughter of Indian immigrants. They came to America and settled in a small Southern town. My father wore a turban. My mother wore a sari. I was a brown girl in a Black and white world. We faced discrimination and hardship, but my parents never gave in to grievance and hate. While she declared from the outset that the United States isn’t racist, the story she tells is deeply shaped by the country’s racism. Read more

Why they hate her: Kamala Harris, Black bodies and the white right. By Chauncey DeVega / Salon

When Donald Trump, the Republicans and the white right more generally, looks at today’s Democratic Party they see an existential threat, a black and brown bogeyman who wants to dominate and control white people. Kamala Harris will be the focal point of their rage and racism. Donald Trump is recycling his white supremacist “birther” smears and using them against Harris. Read more

The nation’s rootedness in slavery and the way white Americans have galvanized the privileges afforded them are critical to understanding the problem of race in America, but so too is the history of housing and racism in American cities. Property and racial inequality have been bound up together so tightly and for so long that we often miss the relationship, and yet we cannot understand police brutality in the United States without it. Read more

What the 19th Amendment Meant for Black Women. By Martha S. Jones / Politico

In August 1920, women across America celebrated the adoption of the 19th Amendment. At the National Woman’s Party headquarters in Washington, Alice Paul, the group’s leader, triumphantly unfurled a banner displaying 36 stars, one for each state that had voted to ratify the women’s suffrage amendment. But the moment looked very different to America’s 5.2 million Black women—2.2 million of whom lived in the South, where Jim Crow laws threatened to keep them off the registration books. For Black women, August 1920 wasn’t the culmination of a movement. It marked the start of a new fight. Read more

‘Emmett Till Is Anne Frank To Black America.’ By Brianne Garrett / Forbes

To Beauchamp, Floyd’s death brings even more meaning to Till’s. “I’ve always known that Emmett Till was the [civil rights movement] catalyst, but I didn’t know the importance of this case until now,” he says. “We have never put the story into context and identified it in the same manner that we see today. Read more

There’s a movement to get more schools to teach Black history and it’s being led by teens. By Scottie Andrew / CNN

Before a fateful trip to the National Museum of African American History and Culture in Washington, Alana Mitchell said she didn’t feel like she was Black enough to own African American history as her own. But she found her place in history within its walls, along with a handful of her classmates from Dr. Martin Luther King Jr. Early College, a middle and high school in Denver, Colorado. Read more

At Arlington House, a push to remove Robert E. Lee’s name from the home he once occupied. By Sydney Trent / Wash Post

Now, as monuments to the Confederacy fall and the names of those connected to the country’s racist history are removed from public buildings, a congressman from Virginia is proposing legislation to change the name of Arlington House, The Robert E. Lee Memorial to, simply, Arlington House. Descendants of Charles Syphax (shown) have been courting lawmakers for the past few months to make the change, said Syphax family historian Steve Hammond, who lives in Sterling, Va. The family‘s effort is motivated as much by a desire to accurately honor the full history of the property and the enslaved people who lived there as it is by any antipathy toward Lee. Read more

At the start of the 20th century, one in seven farmers in the United States was Black. In the decades that followed, however, Black Americans were dispossessed of an estimated 13 million acres of land. Many descendants of Black farmers moved north to seek jobs in other industries, removed from familial agricultural backgrounds. Now, nearly 100 years later, people of color are leading a resurgence of interest in farming in the Northeast, and yet for these farmers the barriers to starting a farm remain high. Between lending discrimination and rising costs, many obstacles stand in the way of Black Americans looking to own farmland. Read more

Related: In San Juan County, Utah, a battle for the land is raging between Native Americans and white Republicans. By Henry Grabar / Slate

Black Workers Are More Likely to Be Unemployed but Less Likely to Get Unemployment Benefits. By Ava Kofman and Hannah Fresques / Propublica

Despite the expansion of eligibility, a smaller percentage of unemployed Black workers are receiving unemployment benefits than white workers during the pandemic, according to national survey data from NORC at the University of Chicago: 13% of jobless Black workers received such payments between April and June, compared with 22% for Hispanic workers and 24% for white workers. Read more

The NBA and its glittering array of global stars will likely survive to play another season. It’s a pity, though, that many of the things that the right accuses the league of being and doing aren’t actually true. The NBA is all but guaranteed to never attempt anything radical in its politics, and its civic-minded messaging, such as it is, has been vetted to ensure it won’t inspire anyone else to act in too radical a fashion either. For the moment, however, the notion that the league could be some sort of ideological change agent is as good a bogeyman as any for this failed Republican regime. Read more